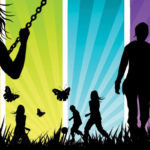 Sacramento, Calif. ? Are all those children yours? How can you stand having that many kids? Are you done yet?

Lynne Cimorelli smiles and answers the strangers who ask these questions.

Yes. I view my children as gifts. I can’t be sure.

The 44-year-old El Dorado Hills, Calif., woman knows her family seems unusual, especially when her 11 children pile out of their 15-passenger van. And she can’t forget a few of the people over the years who have shared their disapproval.

There was the stranger at the store who scolded her about overpopulation as Cimorelli shopped for groceries while pregnant with her third child. There was the doctor who lectured her about the risks of childbearing as she suffered from an infection after the birth of her fourth.

Big families are rare now that the average American woman has 2.1 children, according to the U.S. Census Bureau. And when people see women who have more, it elicits a strong reaction they often have no qualms about sharing.

“There’s not a single (true) Puritan left in the world, but we’re all Puritans,” said Steven Mintz, a University of Houston history professor and co-chairman of the Council on Contemporary Families, a nonpartisan group of researchers that studies changes in the American family. “We’re very moralistic, and we tend to be pretty open about what our values are.”

For Cimorelli, who decided to follow the traditional Catholic path when it comes to childbirth, the judgment she faces is simpler: “I think most people view (children) as a burden, not a blessing. Because if you saw them as a blessing, you would say, ‘Wow, you are so lucky.”‘

At some point, children began to be viewed as more costly than cost-effective. In 1800, when they could help plow and harvest, the typical American woman had seven to 10 children, Mintz said.

In more recent history, a large family wasn’t the norm but it wasn’t unheard of, either.

“The fact that the Kennedys had a lot of children was not something that people criticized, but today the attitude would be quite different,” Mintz said. “We’re a society that claims to love children but, in fact, we say things like, ‘Children are a drain on our world’s resources.’ Nobody would have said that 50 years ago; they wouldn’t have thought it.”

Children have become investments who need to be read to, Einsteined and schlepped to tuba lessons and Mandarin classes. They need their own rooms, the latest toys and college funds. And it all has to be done while both parents pursue increasingly challenging careers.

“We changed from a child-oriented society to a work-oriented society – people are on call 24 hours a day,” Mintz said. “And that changes your attitude toward kids who you may love and care for, but they can’t take up too much of your time because that will conflict with your work obligations.”

Cimorelli was finishing up her master’s degree in piano performance at California State University, Sacramento, when she met and married her husband, Mike. They wed in a small parish in Stockton, Calif., and son Michael arrived two years later.

The young couple struggled to pay bills while living in an east Sacramento duplex where a grand piano dominated the entire place. Then Mike Cimorelli started a commercial construction company after second child Christina was born.

It wasn’t the fifth, seventh or even 11th child that overwhelmed Lynne Cimorelli; it was her second. Exhausted from chasing around her toddler son, she wasn’t sure how to accommodate a newborn. There was another adjustment with her third, when the number of children outnumbered her hands. But since then, each addition has become easier.

“You’ve got the tricks of the trade down, and it’s just about crowd control,” said Cimorelli, who home schools her kids in the morning and then shuttles them between karate, basketball, tennis, diving, archery and even synchronized swimming during the afternoons.

“When you just add one at a time, they sort of just blend in.”

In 1976, 60 percent of American women had three or more children and 36 percent had four or more, according to the book being released next month, “Table for Eight: Raising a Large Family in a Small-Family World” (Alpha Books, $14.95, 256 pages). Today, those numbers have dropped dramatically, with 17 percent of mothers who recently gave birth having their third, and 11 percent having their fourth or more, according to the Census Bureau.

“It’s seen as a choice, so people don’t only feel free to judge, but they’re very open about it,” said “Table for Eight” author Meagan Francis, who has four children. “Some of that has to do with what’s outside of the norm, which makes people uncomfortable no matter what it is.”

Plus, where other parenting choices such as public vs. private schooling, cloth vs. disposable diapers, and breast-feeding vs. formula are largely private matters, when people see you at the grocery store or park with all of your children, your choices are visible.

“When you go out with your five to seven kids, you’re making a statement,” Francis said. “It’s your public face of parenting right there.”

Cimorelli notices the stares she gets when she’s out and mostly attributes them to curiosity. She understands why her entire family gets invited to dinner just once or twice a year. And she accepts being seated in the back corners of restaurants.

“Whatever. I understand it,” she said. “Initially I was self-conscious, but then I decided, ‘We’re going to show you.’ “

And at restaurants, the children color in their books, talk nicely to each other, and each, even the 2-year-old, knows how to order from the server.

The instances of larger families declined the most during the 19th century, according to Mintz, the University of Houston history professor. While the typical American woman had five children in 1850, she had three in 1900. Then women entered the work force and started having kids later, so two children became the norm, he said.

That changed briefly after World War II during the baby boom, when couples began having three or four children in reaction to the Depression.

Today, there seems to be a slight uptick in some families – reportedly in wealthier communities – having three or four children, Mintz said. There’s the Angelina Jolie effect of growing families through adoption. And then there are couples that create larger families with their children from previous marriages.

And while some topics are considered taboo like someone’s weight or hairstyle, child-rearing and family size are areas people feel comfortable discussing, even with strangers.

“A lot of times people see a pregnant woman and her family and think that’s public property,” said Francis, who notes that total strangers would sometimes rub her pregnant belly. “Judging parents, moms especially, is what we do.”