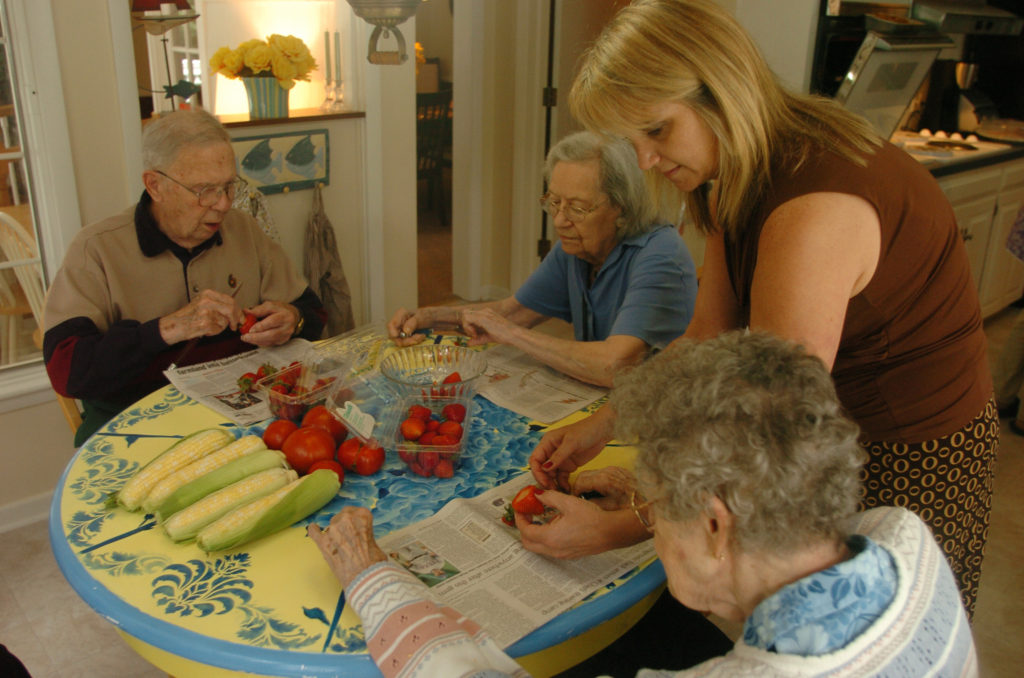 Harbor House residents Vince Van Sykle, left, Gladys Burge and Mary Davis help director Kitty Shea, standing, with preparing fruit for a snack. Shea and Robert Wilson opened Harbor House, 1126 Hilltop Drive, for seniors with Alzheimer's or dementia. Developers in Lawrence have expressed interest in creating more continuum-care facilities - those that address some or all stages for retirees who go on to independent living, assisted living or 24-hour care. 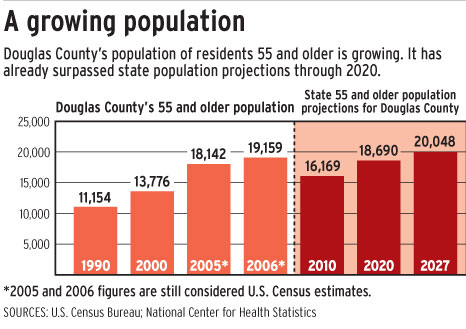 The nation is bracing for the aging of 75 million baby boomers, those born between 1946 and 1964 after the soldiers returned home from World War II.

As the first wave reaches their 60s, they are considering where they want to retire. With an estimated $3 trillion in assets, communities, including Lawrence, are working to retain retiring boomers while luring others.

While Florida and Arizona have traditionally been beacons for retirees, experts say college towns are increasingly popular destinations.

Blanche Evans, of Realty Times in Dallas and author of several retirement books, said there’s a trend to go back to college towns because they offer an array of activities, education, safety and less traffic.

Many agree, whether they’re demographers, developers, builders or retirees themselves.

“College towns are generally very good candidates for being retirement destinations,” said Laszlo Kulcsar, director of the Kansas Population Center. “There’s been a change, and natural amenities themselves are not necessarily enough. So people tend to go places where they can find cultural amenities as well as museums or exhibition halls or those kind of things.”

That’s why when they retired in 2001 Harry and Becky Gibson moved from Houston to Lawrence. Harry Gibson said they wanted to live where they could enjoy events at Kansas University and elsewhere in the community.

“We wanted to take part in all of the various activities,” he said.

With hundreds of colleges across the nation, competition is strong. While there has been no direct marketing, Lawrence has showed up on a few Web sites and in books as being one of the top places to retire.

While KU researchers and Lawrence leaders agree that the city is an attractive place to retire, they add that work needs to be done to make the city a true retirement destination.

“We are going to see a very different approach to meeting the needs of the elderly during the next 20 years than what we have seen in the last 30,” he said.

For instance, Diaz Moore said, neighborhoods need to be walkable with sidewalks on both sides of the street.

Tom Wetzel, president of the Retirement Living Information Center in Redding, Conn., said there is a trend to not only make communities more walkable, but to add retail in the neighborhoods.

“We are definitely going to see home health and adult day take off over the next few decades. It is just going to have to happen”

As for homes, Diaz Moore believes “flush-entry” residences – meaning there are no steps to get into the door – will be easier for the elderly to occupy. He also would like to see more “granny flats” or garage apartments.

“When you talk about retirement, they often want to be in residential areas, but often can’t afford to live in large houses but might be able to afford a one-bedroom space above a garage,” he said.

Last year, the city adopted new regulations that allow accessory dwelling units in certain single-family residential districts. Before, homeowners would have to be in a multi-family district to have the second unit.

She also said a new development code requires sidewalks to be on both sides of all streets. Previously, the code required one sidewalk on local streets. She said the city hopes to eventually fill in the gaps where sidewalks don’t exist.

Stogsdill said the city is developing a code that would allow more mixed-use development. One such project is planned near Sixth Street and Wakarusa Drive. The Bauer Farm development will include a mix of retail, offices and residential units. Construction is scheduled to begin in early 2008.

Lawrence developer Jes Santaularia said his company will be building such a community in southeast Topeka during the next couple of years. In Lawrence, he is building Bella Sera at the Preserve, Bob Billings Parkway and Inverness Drive, which is targeted at adults age 50 and older.

The developer said he’s found most of his new residents are interested in a low-maintenance environment, having freedom and independence to come and go as they please, and a sense of neighborhood and community.

“Half of our buyers are from out of town but they have ties to Lawrence and they want to be here for part of the year, so that’s why we built it,” he said.

Kitty Shea and Robert Wilson said they filled a different void in Lawrence when they opened Harbor House, 1126 Hilltop Drive, in May for seniors who have Alzheimer’s disease or dementia. The home provides 24-hour care, social activities, a secured backyard, meals and housekeeping. Her goal is to make it as comfortable as possible.

“Our job is to give these people experiences every day – joyful experiences,” Shea said.

Shea said she hopes to open more homes for those with Alzheimer’s disease or dementia.

“My hope is that by the third house I can do a Medicaid house where I can take lower income,” Shea said. “I totally believe in what we do.”

Bobbie Flory, executive director of the Lawrence Home Builders Assn., said she is seeing more developments in the community aimed at retirees.

“I think developers are understanding that it’s about offering different housing choices,” she said. “KU is a huge draw to who might potentially come back to the community and spend their golden years.”

She also believes that Lawrence’s housing is “reasonably” priced compared to other retirement areas.

Debbie Walker, director of assisted living at Pioneer Ridge Retirement Community and a member of the Douglas County Senior Services board, has worked with the elderly for almost 20 years. She said seniors are becoming more involved with their health care.

“They are very pro-active, and they are very much interested in getting involved with exercise programs,” she said. “My personal belief is that as we age, what we enjoyed when we were younger we continue to enjoy. And just because you are 75 doesn’t mean you don’t like to go out dancing.”

Walker would like to see Lawrence offer more activities for seniors.

“I think Lawrence still is on the edge of totally grabbing that whole concept,” she said. “I would say within the next three to five years there will be a lot more venues that are appropriate for seniors.”

“The secret to success is a great activity program that shifts and changes according to the residents who live there at that moment,” she said.

That’s something in which nationally known Del Webb active adult communities takes pride. Caryn Klebba, corporate communications manager for Del Webb, said the 80 communities offer activities such as yoga, pilates and scrapbooking, which weren’t offered several years ago. She said the company recently surveyed its 55 and older residents to see what types of activities they were interested in. She said sports flying, parachuting and kayaking were among those activities.

“Those things you don’t typically think of for the retiree, but these folks are changing the definition of retirement,” she said.

Redford said Lawrence also needs to have a good transportation system for retirees. She said connecting Lawrence and Kansas City would be even more appealing.

“You’ve really got a lot of advantages with Lawrence being so close to Kansas City and to major medical services,” she said.

Marvin Hunt, director of KU’s Osher Lifelong Learning Institute, agrees. Not only does the institute provide self-enrichment courses for retirees in Lawrence, but in Topeka and Kansas City as well.

“As they (seniors) get older – up in their 70s and 80s and such – they would like to have good public transportation and ways to get places because sometimes driving out at night becomes an issue,” he said.

The city of Lawrence recently considered reducing public transportation services but decided against it after public backlash. An aging population is only going to drive up the need for more transportation, and Mayor Sue Hack said the city realizes this.

“As we get, hopefully, less car-dependent and more public transit-dependent, the city’s going to have to accommodate that knowing full well that it will continue to be in the public service domain as opposed to something that is a moneymaker.”

To market, to market

While city leaders realize that baby boomers are beginning to retire, there has been no campaign to lure them here.

Hack, who says she plans to retire here, said the city needs to look at whether the community wants to market itself as a retirement destination.

“One of the things we hope to do this fall is a visioning process with the community,” Hack said. “If the community is engaged in the process and truly believes that we want to move in that direction, then that would be something that I think we should seriously look at.”

One such community that has made great strides in marketing toward retirees is Manhattan, home to Kansas State University.

Manhattan’s Chamber of Commerce set up a “Retire to the Flint Hills” campaign six years ago. The campaign targets K-State and Manhattan High School alumni groups, former and current Fort Riley soldiers and their families, and former Manhattan residents.

“It has been very successful,” said Jeff Chapman, who helped with the campaign and is executive director of Meadowlark Hills Foundation in Manhattan.

Many of the Manhattan retirees are settling in at Meadowlark Hills Community, a retirement area that offers continuum care – another national trend – with several amenities. It provides independent living, assisted living and 24-hour care. The community has doubled in size since opening in 1980 and continues to grow. It has services for those with dementia and Alzheimer’s disease. It has home health services, therapy services and a wellness program. The community is in the process of building a fitness center with therapy pool.

“We are internationally recognized for de-institutionalizing the nursing home and making changes in environment and staffing and in the way residents decide to live their day every day,” Chapman said. “Basically people are doing what they want and the place is home. It’s not homelike, it is home.”

Stogsdill, of Lawrence’s planning department, said there’s an interest in that type of community here.

“We have had a number of inquiries in the last several years of developers wanting to do continuum care,” she said.

Which seems to be a good idea considering the statistics of the county’s aging population.

“They will not just go to a random place,” he said. “They will compare. They will use the Internet. They will make choices.”

It is up to Lawrence whether that place is here or elsewhere.