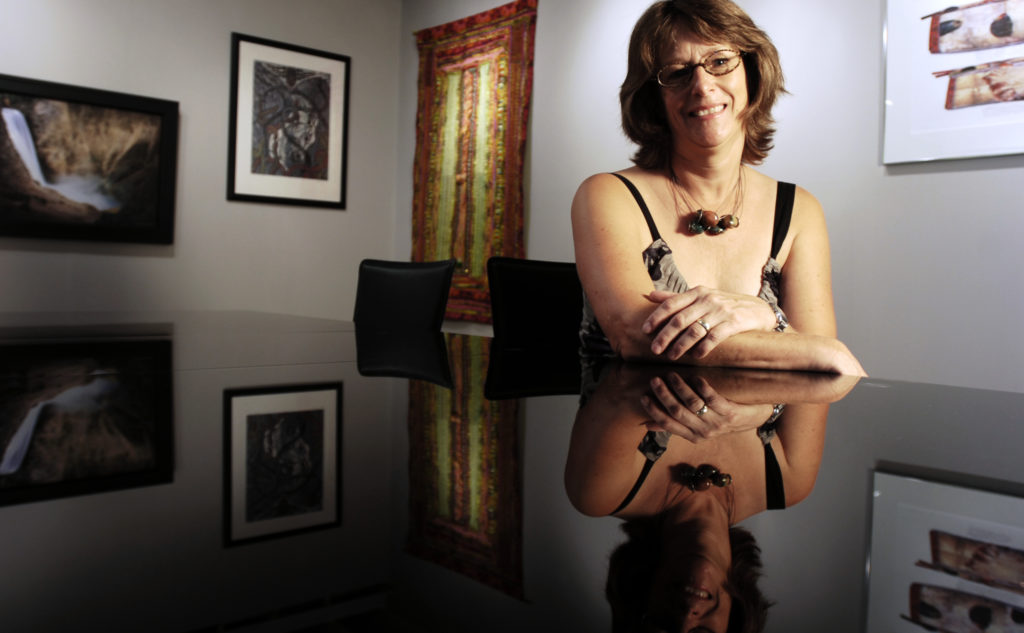 Lawrence's newest art gallery opens Friday with a reception to celebrate its first exhibit, Thresholds, which features a cadre of top-notch artists with local ties. Owner and artist Sally Piller dubbed the venue 6 Gallery, and she's pictured there, 716 1/2 Mass., where she'll also have a personal studio to create paintings and prints. 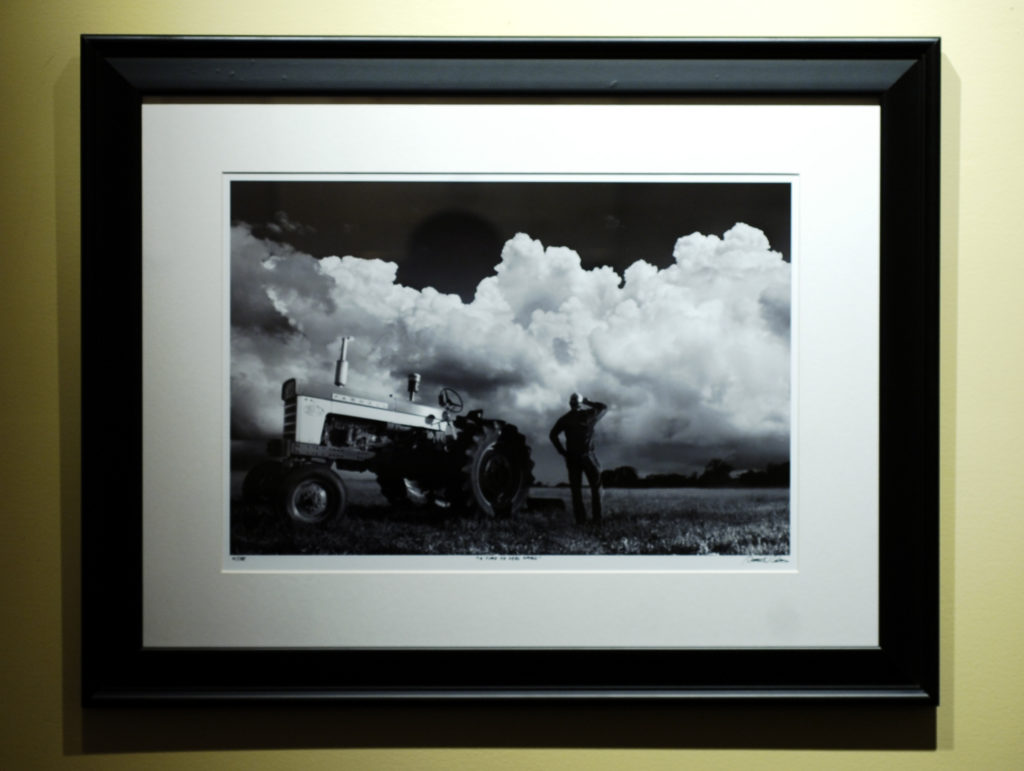 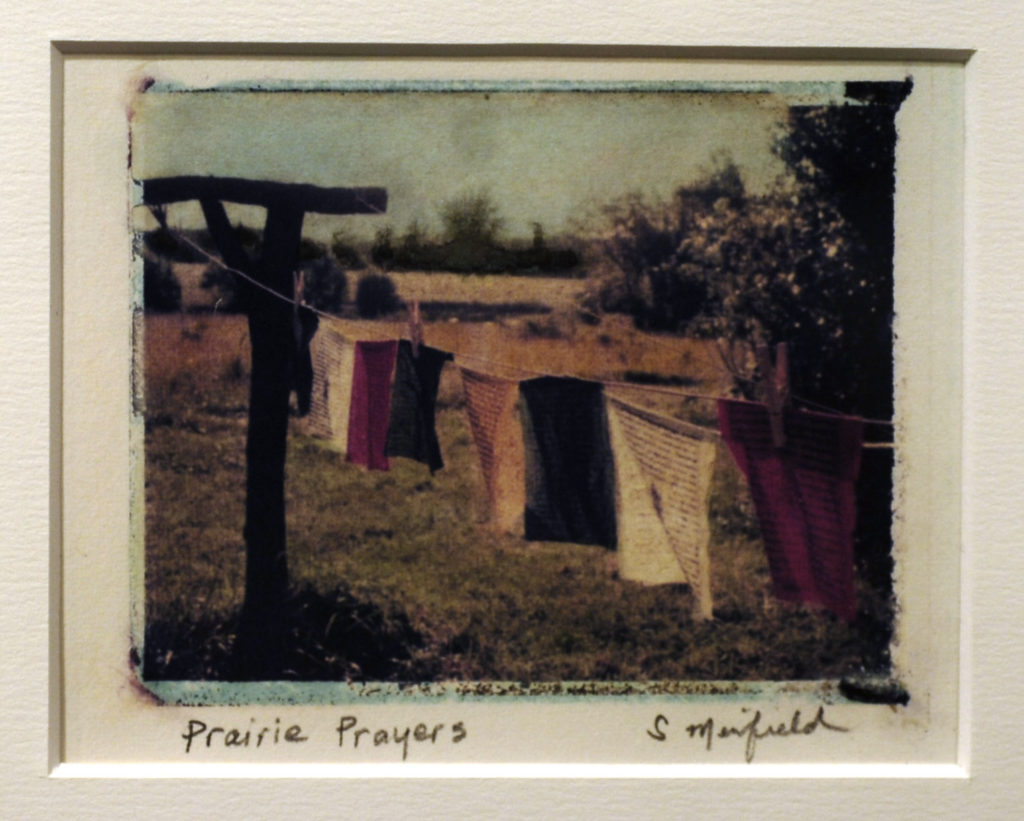 What: “Thresholds,” a group show at 6 Gallery, which is celebrating its grand opening

It’s a cozy space, tucked into a basement that once housed a music store on Massachusetts Street. Local artist Sally Piller is the brains behind the operation, which she calls 6 Gallery.

“As far as having any experience in this business, I don’t have any. But I feel like that can’t be a liability because you might as well reinvent the wheel,” she says. “Nobody else has been able to work out how to make it work in Lawrence.”

For her first show, Piller has invited a cadre of top-notch artists with Lawrence ties to interpret the theme “Thresholds.”

It’s an apt title for a new beginning.

Piller hatched the idea for the gallery during a transitional period in her life.

“I was an empty-nester last year for the first time,” she says. “Both of my parents died, and I kind of felt like reinventing myself, I guess.”

For years, she and her husband, Lynn, had been coveting the building at 15 E. Eighth St. as a home for their other venture, Richard’s Music Co. They passed it up once when it was on the market; that’s when the Olive Gallery moved in. But the Olive closed in late 2006, and the Pillers acquired the space and relocated the music store there from its previous home at 716 1/2 Mass.

She considered renting it as studios for artists. She thought about creating an exhibition space.

Then the iconic Fields Gallery went out of business, and Piller decided there was a gap to fill in the commercial gallery scene.

But how to avoid the same fate as the Olive and Fields?

“The thing about it that I think is hardest for people is that I don’t think you can really make a living doing it,” says Piller, whose husband also runs a heating and air conditioning business. “We have another source of income for our family … so we’re able to have Richard’s and not have to worry too much about making a profit. We just want to be able to pay the rent and keep it going because it’s sort of a Lawrence institution.

“And that’s the same kind of vibe I want here (at the gallery). I know it’s a cliche, but it’s going to be a labor of love.”

Piller originally wanted to open the gallery in May, but she was hampered by a broken knee – and the space needed a lot more work than she realized.

She tore out a nicotine-stained drop ceiling, exposing a funky wooden support structure for the floor above that she painted white. The walls got a coat of light gray, and she erected partial walls in the center of the room for more display.

She covered the dingy linoleum floor of the 1,080-square-foot gallery with interlocking gray and red carpet squares, and she invited artists Glen Mies and Pat Egger to paint a graffiti-style mural on the cinder block wall flanking the entrance.

“It’s this humble little space,” Piller says. “I don’t think this place is very intimidating. … I want to engage people that walk in here and have conversations about art and ask them how they feel about it and not try to defend it.

“I think a lot of times I go into a gallery and people are trying to lecture me about why something’s good. I feel like I’m being talked down to; it’s insulting.”

To stock the gallery, Piller invited about 50 artists she admires to sign up for group shows. She has planned two years worth of themes, including “Delicious,” “Inner Journeys,” “Water” and “Activism and Dissent,” which will coincide with the 2008 presidential election.

She says it’s been fun watching work funnel in for the first exhibition and seeing different interpretations of the “Thresholds” theme. They range from literal to symbolic, universal to personal.

“This is a very important change and a new beginning for me as an artist,” she says.

Photographer Tim Forcade says experiencing a threshold is like “waking up in an unknown place without preconceptions and watching as the mind works to grasp it.”

No doubt visitors will stare long and hard at his shot, “In Love Not Given Lightly,” trying to figure out exactly what they’re looking at. It’s an extreme close-up of … something.

She plans to host discussions in the gallery and have artists give talks about their creative process.

She’s also teaming up with local charities for each show, choosing nonprofits based on thematic connections. First up is Big Brothers Big Sisters of Douglas County, an agency that helps children get a good start in life.

Not only will the chance to contribute to a nonprofit make visits to the gallery more substantive, Piller says, but the partnerships also should expand her audience.

“Say we have a show called ‘Water,’ and we have Friends of the Kaw,” she says. “We’ll have people from that group come in, and people that are interested in water conservation will come in and then they’ll see these images that they’re interested in, something that they’re passionate about.

“I just want to make connections with art in the community.”

Forcade can see that happening at 6 Gallery.

“Seeing real work on a physical wall and exchanging ideas with the artist firsthand is rare and often marvelous,” he says. “Lawrence needs open art spaces like this where people can gather and share their work.”

The gallery will double as a studio for Piller, a painter and printmaker, who also will have a few pieces in the first show.

“I love working with all these artists,” she says. “They’re great people.”

Piller’s not sure what to expect as she embarks on running her first business, but she can’t wait to see what people think of the gallery.

She’s anticipating questions about its numerical name, but says it doesn’t mean anything.

“One thing that is interesting, though, that’s just sort of serendipity, is I found out that 6 Gallery is the name of a now-defunct place in San Francisco where William Burroughs and Jack Kerouac and Allen Ginsberg all met and where they used to hang out and read poetry and all that stuff,” she says. “I had no idea. Isn’t that amazing? I love that.”

With any luck, the number will become just as legendary for Piller.