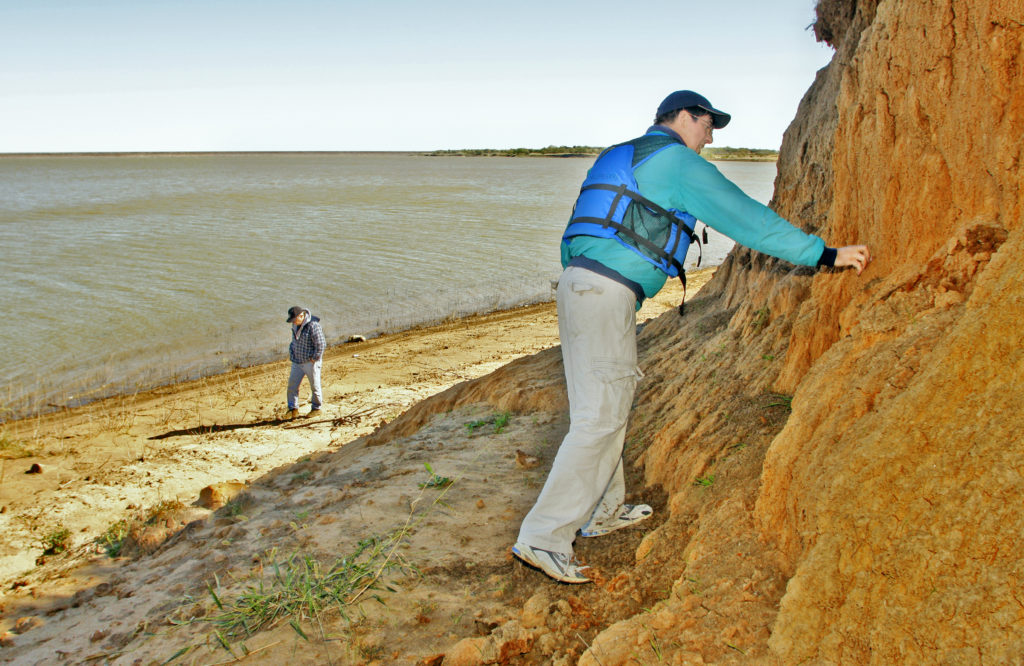 Mark Jakubauskas, a research associate professor for the Kansas Biological Survey, and Frank Jerry deNoyelles, KU ecology professor and associate director, survey bank erosion Friday at Kanopolis Lake southwest of Salina. Sedimentation has many top Kansas officials concerned about the future of Kansas' reservoirs, which are filling up with silt. 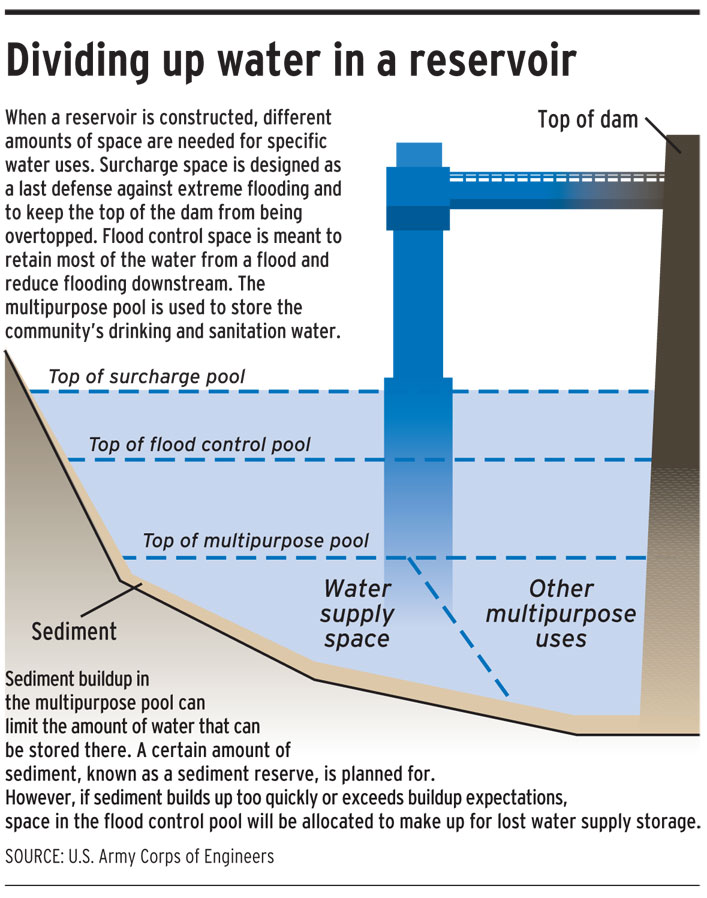 Dividing up water in a reservoir

A grin – wide and excited – spreads across Mark Jakubauskas’ face.

“This is awesome,” he says.

On the computer screen in front of him are layers of colors – blues, greens, yellows, oranges and the occasional reds. To most they would mean nothing. To Jakubauskas, they are the reflections of sound waves that ping from the boat to the bottom of the reservoir and back to the boat. Over the course of two days, they will send 200,000 of these pings through the water.

In the moment the grin appears, Jakubauskas is looking at a computer screen showing a steady line of red across the middle. A few inches above it are some yellows and oranges.

The sonar has just captured the original bed of the reservoir, which before the dam’s flooding in 1948 was the valley floor. The lighter colors above indicate the amount of sediment that has collected since the reservoir was built.

With a few pings, Jakubauskas estimates there is about 8 feet of silt accumulated beneath them.

The crew has been waiting all day – actually more like months – for this kind of easy-to-read data. Without it, they would have to use decades-old topographical maps and do complicated calculations.

But, here it is, in an instant, clear as a picture – just how much silt has gathered and how big of a problem Kanopolis Lake is facing.

Since this spring, Jakubauskas, KU ecology professor Frank “Jerry” deNoyelles and Scott Campbell, associate director of the KU Field Station, have spent days in this sturdy, aluminum fishing boat, turned research vessel. They have mapped the silt on about a dozen reservoirs in Kansas. Much of their work is funded through the Kansas Water Office.

The data indicate how much storage capacity the reservoirs have left for drinking water and flood control. And, if the time should come, the numbers will help establish how much sediment needs to be dredged from the bottom.

Their findings are important to state officials, who will spend the next half-century determining what to do to keep Kansas’ aging reservoirs vital.

DeNoyelles stands along the shore of Kanopolis Lake. An eroded bank looms above him. Dirt sifts through his hands. This, Kansas’ fine-sandy soil that eons ago was an ancient inland sea bed, is the problem, he says.

Kansas isn’t like Minnesota with its granite rock locking in glacier melt to form lakes thousands of years old. By nature, lakes aren’t suppose to be here.

The soil, which so easily washes from farmland and river banks, is carried by shear hydrologic force downstream. That is until the water reaches the mouth of the dam, where it slows. As the water settles, dirt drifts down to the bottom of these man-made lakes. Over decades, feet upon feet of silt stack up.

“It is inevitable. That is the striking thing about it,” deNoyelles said. “These reservoirs, this reservoir that we are looking at right now is going to fill in in a century.”

The problem is, Kansas has come to depend on those reservoirs. From small farm ponds to Milford Lake, with its 163 miles of shoreline, the state has thousands of them.

When the U.S. Army Corps of Engineers began building reservoirs in Kansas – starting with Kanopolis – it was to provide flood control. They later became sources of public water supply, irrigation and recreation. Today, two-thirds of Kansans and much of the eastern side of the state rely on reservoirs for drinking water.

Even when they were built, the reservoirs were given lives of 50 to 100 years. Just a year shy of 60, Kanopolis has approached and passed middle age. Many others will follow in Kansas and in other Great Plain states, which will face the predicament of dirt displacing water.

The drought that has hit the southeastern United States – and panic over the declining drinking water in reservoirs – highlights the importance these bodies of water have on public welfare.

The sedimentation coming into the country’s reservoirs has to be incorporated into long-range planning, said Michael Hayes, director of the National Drought Mitigation Center at the University of Nebraska-Lincoln.

“If you are an official and not considering that, then you are missing something,” Hayes said.

Just a few days before the Kanopolis expedition, Kansas Water Office Director Tracy Streeter stood in front of a room full of state legislators, department heads, federal bureaucrats and water experts at the Dole Institute of Politics. He threw out a date: 2012.

Five years from now, the supply for water in southeastern Kansas’ Neosho River Basin is expected to smack straight into the rising demand. And, if the region were to experience droughts as severe as those in the 1950s, there would not be enough water in storage for everyone who wants it.

For every year after 2012, it takes a little less drought for the water supply to dry up.

The largest of reservoirs in the Neosho River Basin is John Redmond, where almost half of the space needed for drinking water has been filled in with silt. The Kansas Water Office estimates that the amount of sediment settling in the lake each year would cover 2,075 acres a foot high with muck.

From the stern, deNoyelles guides the boat across Kanopolis Lake. He looks between his Global Positioning System and Jakubauskas’ screen, which has red, ribbonlike lines charting the lake.

As he steers, deNoyelles talks about another project under way with the Kansas Biological Survey. Just as weather patterns are studied to forecast annual crop yields, deNoyelles said he is trying to look at weather and water conditions to estimate algae growth. The information will help in predicting water quality.

It’s nothing poisonous and it won’t make people sick. But, the water will have a musty, earthy, fishy taste, deNoyelles said.

“Really, all of our reservoirs are at some stage of having a problem with the taste in our drinking water,” deNoyelles said.

Lawrence’s water supply has had “taste and odor” problems from the algae growing in Clinton Lake. Assistant Director of Utilities Philip Ciesielski said he couldn’t say if it had anything to do with the lake’s increasing sedimentation.

Upstream from where the city of Lawrence pulls water out of Clinton Lake, sits the water intake system for Shawnee County Rural Water District No. 8. In the years after Clinton Lake formed in 1977, the district noticed the water quality decrease as sediment built up around one of the lines drawing water. Within a decade, the line was abandoned, general manager Dennis Schwartz said.

In the next 10 to 25 years, another line – this one higher in the lake – could be threatened by silt, Schwartz said.

“We are in the upper reaches of the reservoir. So we probably are seeing, witnessing, the first negative aspects of sediment accumulation,” Schwartz said.

From the bow of the boat on Kanopolis Lake, Campbell gives an overview. Call it Kansas Reservoirs 101.

The lesson: There is no easy answer on what to do to keep the reservoirs viable.

“If it were easier, we’d already know what to do,” Campbell said.

Walter Aucott, director of the Kansas Water Science Center and with the US Geological Survey, told the crowd at the Dole Institute that efforts to shore up river banks and stop water runoff haven’t been working as well as they had hoped.

The federal government hasn’t built a dam in Kansas for 25 years. Federal agencies at the Dole Institute made it clear that building reservoirs isn’t as simple as it used to be. They now have to factor in endangered species and environmental impact studies.

And, all the prime spots for reservoirs are taken.

Raising the level of the dam for some reservoirs could mean flooding out parts of towns and cities.

Dredging is an expensive proposition. DeNoyelles estimates to dredge some of Kansas’ lakes could take up to a $1 billion.

Even if money was there to pay for the dredging, there has to be a place to put the uprooted silt and there are environmental impacts. When the sediment is dredged, pollutants are stirred up and the lake’s habitat is disturbed.

For the past decade, deNoyelles has been sounding the alarm on the rising sediment levels on the reservoir bottoms, his colleagues said.

State Rep. Tom Sloan, R-Lawrence, credits part of his concern to deNoyelles and Ed Martinko, director of the Kansas Biological Survey. The gathering of state officials at the Dole Institute was Sloan’s idea.

For Sloan, a major question is who will pick up the tab for the changes needed in the reservoirs.

This year the state will send the federal government about $2.5 million so it can store water in its reservoirs. Sloan would like those annual payments to come straight back to Kansas. And, another tax – a few cents per 1,000 gallons – might be needed on drinking water, he said. He also thinks the fishermen, boaters and beachgoers should help out.

“If (we) do nothing for the next 10 years, we are going to be OK,” Sloan said. “But the ultimate cost is going to be much higher. I believe it is better to pay a little bit today and prevent a crisis tomorrow than it is to try to address a crisis when it occurs.”

As the boat bounced across the top of Kanopolis Lake, the pings at full throttle and the sun shining, the rising sediment seems far below the surface – out of sight and easy to ignore.

Then the image of the rock bottom covered in feet of sediment pops up on Jakubauskas’ computer screen, bringing the problem into full view.