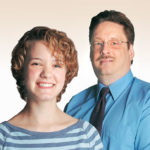 Dear Dr. Wes and Julia: My 16-year-old son has been behaving in a progressively worse manner over the past year. He’s rude to us – telling us to shut-up, get out of his face and not tell him what to do. He calls his younger sister names and runs her down. He doesn’t come home on time, wants to play computer games straight after school and half the night, doesn’t do his school work until the last minute, walks out of the house when we tell him he’s grounded, takes our computers apart for upgrades to his computer, stays on his cell phone until all hours. I recently blocked his phone, but now I have to rely on his friends having their phones on when I need to contact him.

His father and I are at our wits’ end as to how to get him back on track. I am told by his friends’ parents that he is polite and helpful when he is there, but he just doesn’t want to have manners at home or help out when we give him chores. We don’t have the money for boarding school. Is this normal teenage behavior and should we accept it without a fight, or is there something we can do to change it?

Julia: Which terms best define “teenager”? a) sweet and well-mannered; b) rude and misbehaved; c) always upset about something; d) I don’t know, he’s always sleeping.

The correct answer is e) all of the above. Every teenager is made up of the same basic stuff: raging hormones, a desire to be an individual and a heightened sense of whatever they are feeling. However, adding all of the components together can make for an unfortunate result that leaves the teen feeling misunderstood and the parents cut off.

You want to reach out to your son and offer any help and support you can, but he is being ungrateful, rude and apathetic. Now switch the point of view. Your son is desperate to be an individual accepted among his friends and on top of his quest for individuality. He has homework and girls, and his parents want to know what is wrong. From both points of view, someone is in the right and someone is in the wrong. That’s the constant gap between parents and teenagers – the idea of “I’m right, you’re wrong, and YOU need to change.”

The truth is neither of you is wrong in this situation. You’re being the parent: supportive, loving, involved in your teen’s life, and your teen is being the teenager: moody, surly and lacking “cool parents.” Both of you are doing what is instinctual and what seems most right. However, if neither of you change how you react to each other, it will be a long couple of years before some, if any, results are reached. I’ll give you two golden rules when it comes to teenagers that might help you when it comes to dealing with your son in the future.

First, let him come to you. Teenagers are sort of like cats in that, when they are ignored, they will come to you for attention. It’s kind of selfish, but it is true that I will try and get the most response out of the person who notices me the least. It might take awhile, but the less your son feels like he needs to block you out, the more he will open up and feel inclined to share things with you. Second, every teenager needs an outlet. It might be a girlfriend, a sport, sleep, just something that takes the edge off of all the stress that piles up. It sounds like your son’s outlets are his computer games and cell phone and, by the amount of energy he puts into both, he is probably blowing off a lot of stress. Although it is very unhealthy to have your eyes glued to a screen until the early hours of the morning, perhaps you can reassess this situation and rework his outlet. He likes gutting computers and playing games – are there any clubs at school or communitywise that do that sort of activity? Taking away his outlet pushes him further away, but reworking it – limiting cell phone use, finding more suitable means for his hobbies – will be healthier for him and less nerve-wracking for you. It has been said that “raising teenagers is like nailing Jell-O to a tree,” but with an extraordinary amount of tolerance and patience on your part, you will come out a happier parent and your son a grateful adult.

Wes: This is a typical family therapy case, and I suggest you give that approach some thought. However, I would say it’s rapidly moving past normal. I’ll add a golden rule to Julia’s list: Remember that you are the parents. Many families are stretched too thin these days, leaving them desperately wishing their kids would “just behave” so they won’t have yet another thing to worry about. The common nighttime use of cell phones or computers is particularly odd to me. Parents are apparently surprised to learn that kids are using their gizmos all night long. So they take them away. Then the kids flip out, screaming, threatening, crying, etc., and for some reason the parents give the devices back. Why not suspend the service or shut down the Internet connection until peace resumes? Because many parents find it inconvenient to collect the phones every night or have their kids live out of touch and offline. Same situation with cars. Take them away and parents feel THEY’VE been grounded, having to take their teens here and there. Then we wonder why teens don’t mind.

Let me save you some suspense – your son isn’t going to decide to behave better on his own. Why would he? Until their early 20s, most kids aren’t really “respectful” – defined as “having an attitude of admiration and deference; paying attention to and refraining from violating something; or showing consideration or thoughtfulness.” The average teen brain simply isn’t built that way. As Julia notes, kids are interested in kid things, not adult things. It’s our responsibility to make them aware of issues like school, sleep, accountability, ethical behavior – and to hold them to those standards. Thus, assertive parenting is more crucial in adolescence than at any other time. Kids respect power – not abusive or coercive power, but compassionate power. Bottom line: If you’re not going to dish fair consequences, he’s not going to behave.

Sit down with your son, explain the rules and consequences, and stick to them. He may be a fine fellow, but he does not have a right to anything he does not earn himself and use appropriately, nor to come and go at he pleases. This won’t make him respectful, but it will make him consider consequences in deciding whether it’s worth it or not to keep doing what he wants to do. Unfortunately, if things really get out of hand, violence or self-harm may emerge. Do not hesitate to use law enforcement or hospitalization to protect your son and your family. This sounds extreme, but parents must not let their children intimidate them.

Next week: School conferences are here. Dr. Wes and Julia look at the trends in schools.