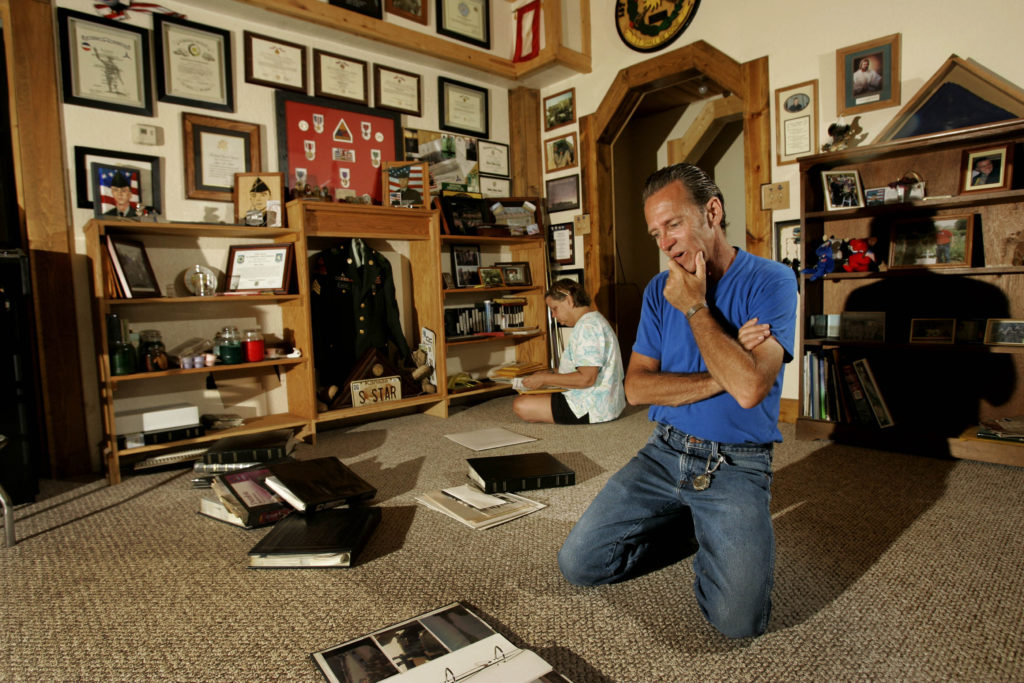 Jim Butler looks over items belonging to his son, Sgt. Jake Butler, in his Wellsville home. Jake's mother, Cindy, is in back. Jake Butler was the first Kansas soldier to die in the Iraq war.

Wellsville ? The day he became the first Kansas soldier killed in Iraq, Sgt. Jake Butler dashed off a letter to his parents, urging them not to forget about him after his death.

He was killed in April 2003, early in a war that has now claimed more than 3,800 American troops. For Jim and Cindy Butler, the four years and six months since then have been filled with good memories that don’t fade as well as tears and grief.

“Some days are better than others, but none of them will be as good as when Jake was here,” Jim Butler said.

A living room wall has become a memorial, filled with commendations and awards, including the Silver Star, Bronze Star and Purple Heart. There are photos from various stages of his son’s life including Iraq, his uniform and the American flag that once draped his coffin.

“I walk by there and touch his picture every night and tell him good night and the same thing in the morning. Come five-thirty or six o’clock when I come out through this room, I tell him good morning,” said Butler, who works construction and raises a few head of cattle north of this rural community of about 1,700.

Their son died in an ambush. Four months later, they received the last letter he wrote.

“If you are reading this, you know I didn’t make it,” it started. “I just wanted to say I love you very much and don’t forget me because we will meet again …”

Cindy Butler said: “I didn’t get it at the time. How could I forget you? But now I know, people move on.”

“As parents, we’ll never forget him,” said Jim Butler, “but I guess I figure in my heart and soul that he wanted a little more. He wanted not just us not to forget him, but others. So basically, it all comes back to the letter itself.”

Jim Butler erected a flagpole beside the house with a garden in memory of his son. He and his wife go to troop rallies. Both wear silver bracelets with their son’s name.

They even use the cell phone that was their son’s, his voice still urging callers in a soldier’s tone to leave a message. It ends: “I’ll get back to you as soon as I can. Thanks.”

“There comes a time when I want to listen to him, I call that phone number just to hear his voice,” Jim Butler said.

Every day, he wears a Gold Star pin to signify a relative killed in combat, and almost every day his son comes up in conversation.

“There is a lot of Jake still in me, and it’s just something you can’t forget; you never will forget it, and to be honest with you, I don’t want to forget it,” he said.

Others are also helping make sure Jake Butler is not forgotten.

Ken Hayes is overseeing a housing development in town and wants to build a seven-acre memorial park as part of it.

“In one of the stories I read, he said he wanted to keep his son’s memory alive and that cemented it for me,” said Hayes, a partner in a Lawrence construction company.

The 2003 Wellsville High School yearbook was dedicated to young Butler. His name is displayed on a window at the town library, along with the names of 62 other people from Wellsville in the military.

Jake was buried with the pomp of a military funeral, the spotlight of the media and throngs of mourners. Then it was over.

For about a week, Jim Butler spent most of his time on the couch thinking about his son, how he enjoyed a good time and liked to joke. Then Jim Butler decided to fulfill the promise a father made to a son. If the son died in Iraq, the father would go to where he died. He made the trip in October 2003, six months after his son’s death.

“I don’t really know why, even today. It was a promise I had made to him and I needed to go,” he said. “Do I blame anybody? No, it was destiny and time, and it was Jake’s time.”

The Butlers agree that their son’s death wasn’t in vain but differ on the course of the war.

“If we pull out now, to me it’s not just the loss of my son and the others and everybody hurt over there. It is going to come back and get us here,” he said.

She said: “I don’t think we’re making any progress over there. I think if we pulled out now, it would be smart because we wouldn’t be losing as many lives. I don’t think they want us there.”