Both joy, frustration soar at prospect of Nepal adoption 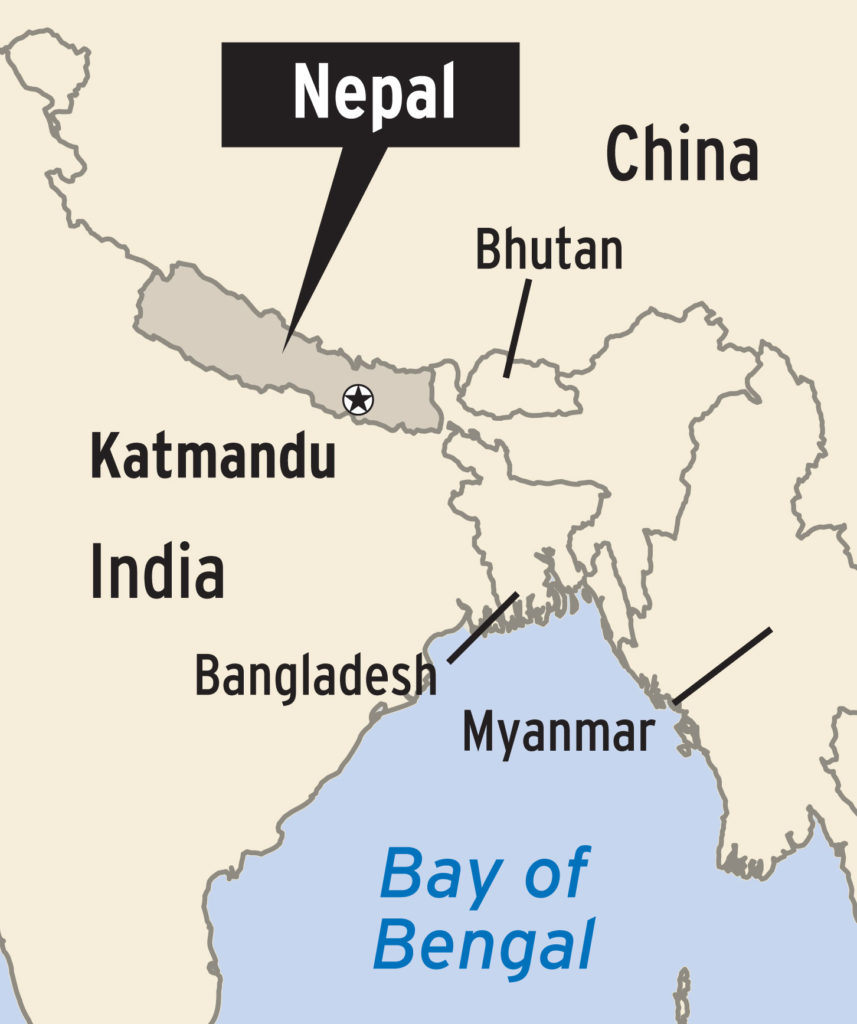 On George Thompson’s computer is a spreadsheet detailing Reshma’s height and weight for each month of her life.

He has the obligatory picture of the baby getting a bath in the sink. And, now there is the anticipation as the dark-eyed child with shiny black hair is on the cusp of taking her first step.

Thompson and his wife, AnnMarie Glodich, might not have the paperwork to prove it, but to them the Nepali orphan is their daughter. She has been since Glodich first held her in February.

For it to be official, the Lawrence couple, along with almost 500 other waiting parents, have to convince the Nepalese government to continue adoption proceedings.

Thompson and Glodich were matched with Reshma more than seven months ago. The couple have made trips to the country to visit her. In fact, Glodich is there now.

Caught in the middle of proposed reforms and a government in turmoil, the adoption process in Nepal is at a standstill. Babies haven’t left the country since February. Orphanages are filling up.

For Thompson and Glodich, there is no date in sight for when they can bring their daughter home.

So, Reshma waits in a Katmandu orphanage as Glodich and Thompson lobby ambassadors and congressmen to put pressure on the Nepalese government to restart adoptions.

Glodich calls it a massive human rights violation. She worries that babies will miss out on developmental skills important in their early years. She also worried about the infections and diseases that run through the orphanages.

“It is painful, it is excruciatingly painful to watch this occur,” she said.

Many parents are caught in international adoption limbo.

“It really has been a tough year for inter-country adoption,” said Chuck Johnson with the Alexandria, Va.-based National Council for Adoption.

After almost a decade of steady climbing, the United States’ international adoption numbers decreased in 2005. The slip continued in 2006 and Johnson said it was likely to go down again this year.

Still, the more than 20,600 children adopted internationally last year is almost triple the number adopted in 1990.

A chief reason for the recent decline is that many countries weren’t prepared for the dramatic increase in adoptions during the last decade, Johnson said. They didn’t have well-defined procedures and the needed documents.

Rumors surfaced in some countries of adopted children having birth parents who still wanted them. Others had tales of mothers receiving bribes to hand their children over to orphanages.

China, with a long list of waiting parents, put restrictions on who could adopt children. The country excluded single parents and those overweight, with mental illnesses and in wheelchairs.

In Guatemala, in a move that parallels Nepal, the president has threatened to suspend all adoptions starting in 2008. More than 4,000 children could be affected by the change.

“It has just been one hurdle after another in addition to the normal hurdles,” Johnson said.

Dianne Atteberry, regional director of Children’s Hope International, said the parents who come through her Overland Park office are having to wait longer than they used to. In many cases, the wait has grown to more than two years.

When adoption moratoriums such as those in Nepal and Guatemala go in place, Johnson said, the bottom line is that the children suffer.

“Two or three problems out of 4,000 result in the whole process being shut down,” Johnson said. “It’s very hard for child welfare advocates to respond. They don’t want to defend one adoption taking place that shouldn’t be. But at the same time, 3,999 children are being deprived of a family. How to strike that balance is what we are all struggling with.”

Just a few days old, Reshma was found on the streets of Katmandu, Nepal’s busy capital.

When the infant arrived to the orphanage, a newspaper advertisement ran for weeks, stating that a baby had been found. No one came to claim her.

A few months earlier, Thompson and Glodich had embarked on the international adoption process.

They have one biological child, Seth, a blond-haired boy of 6 1/2 years. Since he was 3, Seth has been asking for a little sister.

The couple were drawn to the idea of international adoption and Nepal in particular.

“We wanted to take care of someone who didn’t have parents otherwise,” Thompson said.

Both Thompson and Glodich said they did their research. At the time they started the process, Nepal was coming out of a decade-long civil war and heading into what appeared to be a peaceful democratic government. And, they had heard that Nepali adoptions had been successful for years.

“We really didn’t have any idea that this could happen,” Thompson said.

In February, the Lawrence family and Reshma were matched. Her picture came over e-mail and shortly afterward Glodich flew to Nepal to meet her.

When she held Reshma for the first time, the girl was 3 months old and weighed 10 pounds.

“It was like when I first met my son. You are overcome with love. It was the exact same feeling,” Glodich said. “It is your child.”

During Glodich’s first trip to Nepal, she signed paperwork that stated she and her husband were responsible for the life, health and education of the child. A case number was given. Glodich was told to expect to bring Reshma home in four to six months. One more visit to Nepal was required.

As they waited, monthly reports came in with photos of Reshma in her crib, her changing height and weight and what she was eating.

But the couple became alarmed by the changes in the Nepalese government. Adoptions stopped right around the time of Glodich’s first visit. In May, the Minister of Women, Children and Social Welfare officially suspended the adoption process until reforms were in place.

Dates were given as to when the procedures were to be approved and adoptions could continue.

Those timetables have become a list of broken promises, Glodich said.

The major setback came in September when the minister leading the reforms resigned along with other members of the Maoist Party. The minister’s withdrawal brought an already slow process to a halt.

Now, as the country heads into its holiday season and an election approaches next month, Glodich and Thompson fear they are months away from seeing a resolution.

Yes, reforms should happen, they said. But, it is not fair to the parents who have already been matched and the children waiting in orphanages.

“What happens when you come here and meet your child and fall in love with your child?” Glodich asked.

Since Aug. 23, Glodich has been in Nepal. She spends part of her time with Reshma and the other hours meeting with whoever she can that could help speed along the adoption process.

Thompson is a child psychiatrist and Glodich has her Ph.D. in clinical social work. Both are aware of the toll that institutional settings can take on children.

For every three months in an orphanage, the child loses one month of development, Thompson said.

Speaking from Nepal, Glodich said she has to make sure that Reshma won’t become too attached during her visit. It’s a task that goes against her instincts, but she doesn’t want to do any emotional damage when she leaves.

After coming back from Nepal in September, Thompson has been sending out letters to congressmen. He has asked friends, family and his college fraternity brothers to sign petitions urging the Nepalese government to move forward with adoption proceedings.

The Nepalese prime minister and other government officials have met with the U.S. ambassador as well as ambassadors from about a half dozen other countries.

Thompson believes a five-minute phone call from President Bush or Secretary of State Condoleezza Rice is all it would take to get the adoption process moving again.

Whether that would happen, Thompson said, he doesn’t know.

Johnson, with the National Council for Adoption, said in these kind of circumstances parents don’t have many options, besides waiting and asking politicians to put pressure on the foreign governments.

Glodich isn’t sure when she’ll leave Nepal. She’s waiting for some clue as to when Reshma can come home to Lawrence.

“She is family. We are a family,” Glodich said. “I wouldn’t be staying here, we wouldn’t be trying to fight to get her out of this institution if she wasn’t.”