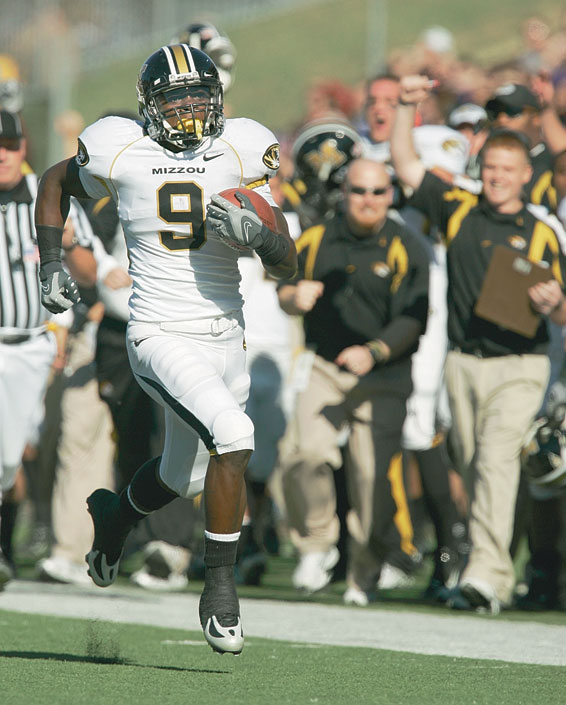 But they had no shot, none of them, of bringing the “wow” factor quite like Jeremy Maclin does.

The fastest man on the field for today’s 7 p.m. game between No. 2 Kansas and No. 3 Missouri will be Maclin, a red-shirt freshman out of Kirkwood, Mo., a utility player to the stars for the 10-1 Tigers.

“That dude is the real deal,” KU cornerback Aqib Talib said. “I enjoy just watching him on SportsCenter. He’s going to be the real deal. He’s probably not going to play all these years in college. He’ll be out real early.”

Maclin can whack a defense upside the head many different ways. He has 59 catches for 885 receiving yards, 38 carries for 287 rushing yards, 256 yards and two scores returning punts and 881 yards and a touchdown returning kicks.

Maclin was a highly touted recruit out of Kirkwood High who expected to get playing time immediately in 2006. But he blew out his knee during 7-on-7 drills in the summer, and a red shirt was forced upon him while he worked his way back.

There are no ill effects remaining, obviously. Maclin shot past Rucker and Coffman (two NFL prospects), past Daniel, past Franklin and straight to the front of the line as MU’s most dangerous weapon.

It has been a pleasant surprise for the Tigers, to say the least.

“I don’t think you could ever anticipate a guy having an impact like this,” Missouri coach Gary Pinkel said. “I knew he was a very, very talented player – he’s got extraordinary skills, he has great explosiveness and athleticism.

“But the thing that allows him to play the way he’s playing right now is he’s got the ‘it’ factor. He’s very mature, he’s very smart. He’s a player that can handle the ups and downs and emotions of playing in front of 70,000 people and it really doesn’t faze him at all. A lot of players, maturity-wise, it takes them a year and a half, two years just to kind of work through all those things. He has all that stuff. That allows him to play the way he plays.”

Maclin is coming off perhaps his best game yet. In MU’s 49-32 victory over Kansas State last week, Maclin had 360 all-purpose yards. That included a 99-yard kick return for a score to put MU up 14-3 in the first quarter. Amazingly, it was Mizzou’s first kick return for a touchdown since 1982.

The return – less than eight minutes into the game – already was Maclin’s second touchdown of the day. He added another one before the game was over, a 44-yard pass in which he got behind coverage.

Each KU coach interviewed this week expressed concern for Maclin’s speed. When asked what to do against such a talent, defensive coordinator Bill Young kept it simple.

Sometimes, that’s the best answer to such a complex question.

“Don’t let him get behind you,” Young deadpanned. “You’re not going to catch him.”