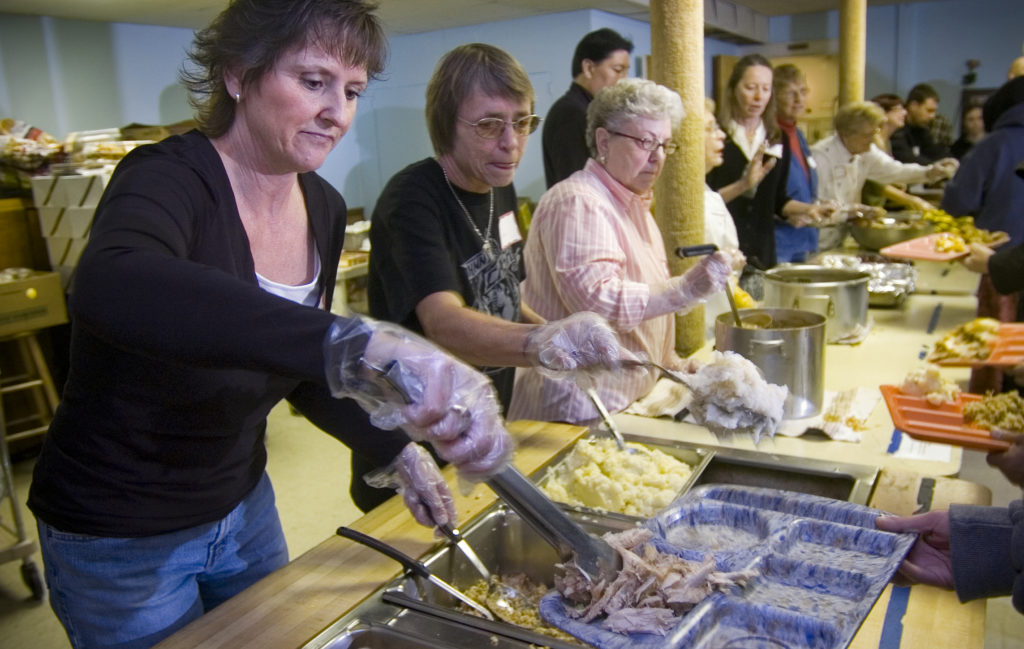 It may have been cold and lonely outside of the Lawrence Interdenominational Nutrition Kitchen on Thanksgiving, but when people stepped inside the basement of First Christian Church, it was another story.

“There’s this camaraderie; everyone’s in a great mood,” said Greg Moore, the new LINK coordinator. He replaced Dianne Morgan, who had served as coordinator for the last two and a half years. “I see people who fight outside hugging each other today. There’s a good feeling in the air.”

The smell of traditional Thanksgiving fare wafted through LINK, contributing to a friendly atmosphere where people in need could share a warm meal with others.

All of the food was donated by churches and businesses and prepared at St. John the Evangelist Catholic Church, 1234 Ky. About 30 volunteers made final meal preparations Thursday morning before LINK’s doors opened. That’s after another 70 or so volunteers contributed throughout the month and on Wednesday to make the meal possible.

As Roy Mathis, of Lawrence, stood in line waiting especially for the turkey, he said he was thankful to have a place to eat with his friends. He said he was by himself this holiday and has been out of work for six weeks after a leg injury.

“We’re just doing something that needs to be done here in Lawrence, you know, because I think a lot of homeless people and people that are a little needy, they need more help, and this is one way of doing it,” Moore said.

He said more than 200 people were served this year.

“It’s all coming together well because of the volunteers,” he said.

Charlene Kornbrust, also known as the Lawrence “hat lady,” made 70 double-knit stocking caps during the year to donate to people, just as she has done the last few years.

“Well, it’s cold out there; they need to keep their heads covered,” she said.