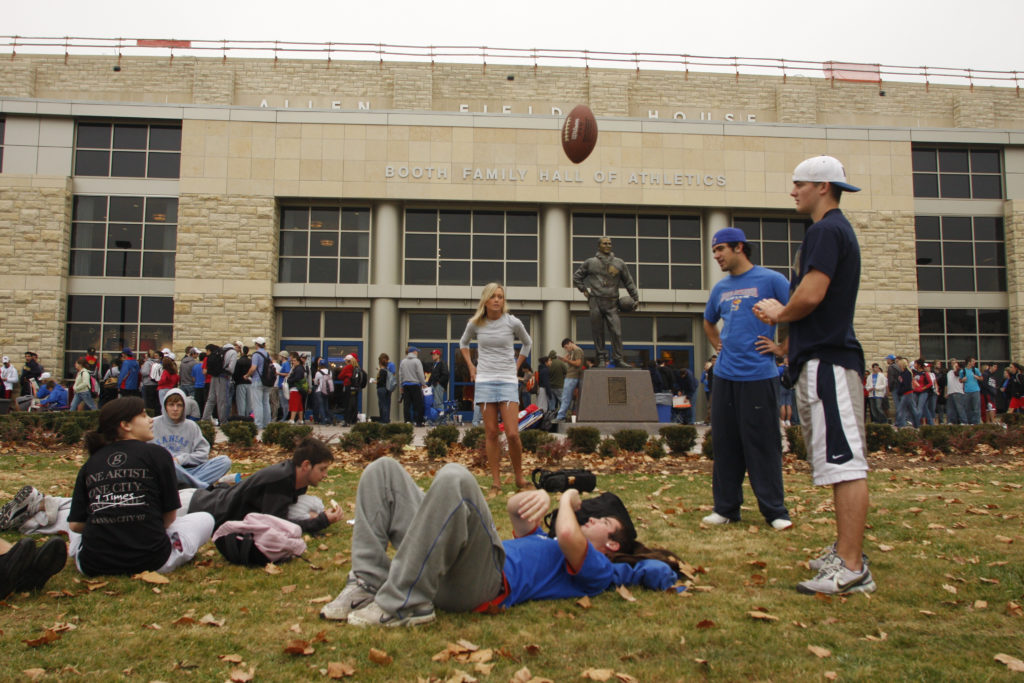 Kansas University student football fans wait Monday in front of Allen Fieldhouse for tickets to the KU-Missouri game Nov. 24. Ryan Leiker passed the time by tossing a football to friends as he rested in the grass. Hundreds of KU students camped out all night to pick up tickets they had purchased for the game.

It’s not uncommon for lines of students to stretch around Allen Fieldhouse before a game.

But on Monday, for perhaps the first time anyone can remember, the line of Kansas University students waiting for football tickets was perhaps 50 times longer than the line of people waiting for tickets to men’s basketball games.

Yet in some circles, Monday’s student ticket distribution is being called the Great Ticket Fiasco of 2007.

“It wasn’t bad until the actual ticket process started happening,” sophomore George Ressler said. “People were freaking out. It was very chaotic.”

And while virtually every student was thankful to be in the game, most were also disappointed that hours of camping or their attendance at every game this season earned them a spot in Arrowhead’s upper deck.

“We should be down lower. I’m kind of upset about the upper deck,” Ressler said. “I feel like we should be closer to our team.”

Lindsey Hanbliff, a sophomore from Smithville, Mo., said her friends arrived at Allen Fieldhouse at 4:30 a.m. Monday. They got their tickets sometime around noon and found themselves in the upper deck.

The first 1,000 students who picked up their tickets Monday also were given for free the new KU-MU rivalry shirts, which KU leaders hope will replace the infamous “Muck Fizzou” T-shirts. These shirts, produced by a consortium of student groups, say “Tigers are an endangered species, Extinction starts today.” KU also unveiled a nongame specific shirt that says “Wave the Wheat, Bring the Heat.”

Many students had suggestions for how to streamline the process if KU plays at Arrowhead in the future: move basketball ticket distribution to another location and use all ticket office windows for football. While both men’s basketball and football had two windows open to process student requests, the line for basketball tickets was about two dozen, while the football line stretched nearly to Murphy Hall throughout the day.

Students also suggested that students be allowed to bring a limited number of IDs with them to the window. Many complained that the first three or four groups snapped up virtually all of the lower level seating, despite having only one or two people camping at the fieldhouse throughout the night. Marchiony said the athletic department tried to accommodate the students with the process and would make changes only if students requested them.

“The pick-up is handled exactly the way students want us to handle it,” he said. “There were a lot of people out there, but there were a lot fewer people than there could have been.”

Cameron Killen, a freshman from Omaha, Neb., was one who did spend a lot of time in line, choosing football tickets over class.

“There was some skipping going on today,” he said of his attendance in Monday’s classes. “Our group got here about 8 and we weren’t going to leave.”

He said as of noon he’d been waiting four hours and still had about 200 people in line in front of him.

For those who couldn’t get tickets to see the KU-MU game at Arrowhead, tickets still remain for the Senior Day game against Iowa State. Kickoff is set for 2:30 p.m. Saturday.