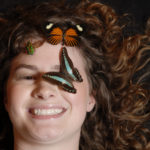 Katie Jennings grew up fascinated with insects and now makes artwork using beetles, butterflies and other creatures from around the world.

Some people see beetles as slime on the bottom of their shoes.

Katie Jennings sees them as art.

For the past five years, the Lawrence artist has been trying to create a buzz by mounting exotic bugs of all sorts in shadow boxes, with art paper for background.

“I wanted to do something cool that nobody else was doing,” Jennings says.

Jennings, 25, grew up collecting bugs and often put caterpillars in an insect box to watch them turn into butterflies.

At Free State High School, she was a potter. But it didn’t occur to her until college, when she took a Kansas University class on the biology of spiders, that she could turn critters into art.

She started selling her artwork earlier this year at galleries, art fairs and at her Web site, www.insectartonline.com.

Jennings orders her insects through a distributor in Thailand. Most of her works are made with beetles and butterflies, though she uses an occasional cicada or moth.

Most of the insects come from Asia. A few are from Africa. She says all are sustainably caught or farmed.

When they arrive in the mail, Jennings rehydrates them using damp paper towels and an anti-fungal agent. Then she pins them to Styrofoam to get them into the desired position for her art.

“The antennas come off all the time,” she says. “I just do a little surgery with Super Glue.”

Eventually, she selects the color of art paper she wants to use for a background and mounts the insects to that paper using glue. All of that ends up in a shadow box.

“I’m kind of on a kick of complementary colors, like a blue butterfly with a bright orange background,” Jennings says. “It’s bright, but it looks good. I have a bunch of art paper, and it’s sort of trial and error.”

Sometimes she gets especially creative with her works. For instance, she painted spiders gold and gave them gold strands to swing from against a black background. Her most recent piece for 6 Gallery used honeybees to make a honeycomb pattern.

For another work, Jennings painted and affixed jewels to a brown beetle, and had other brown beetles following it in a row.

“If you look closely,” she says, “in my personal opinion, the ‘ugly,’ plain beetles are more beautiful in their own right. The moral is you don’t have to be rich and flashy to be beautiful.”

Jennings admits some people are automatically turned off by bugs.

“The best compliment people pay to me when they walk out of my tent (at an art fair) is, ‘I don’t like bugs, but I think yours are pretty,'” she says.

Jennings, who graduated from KU in 2005 with a degree in anthropology, hopes her art can help educate people about the animals she loves. She calls her home “pretty much a zoo,” with fish, cats, frogs, a tarantula and a gecko.

She lists Steve Irwin, the late “crocodile hunter,” as one of her inspirations.

“He would teach people all animals are beautiful, even the ones that are not fuzzy or cute,” Jennings says. “He helped the world love crocodiles and snakes and those kinds of things. It’s an important mission, to help people be environmentally minded, to conserve things that people don’t necessarily think about.”