Figuring out when to toss aging food can be tricky pursuit 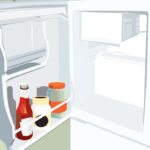 You’re grilling out for the first time of the year, and you scope out the fridge to see if you’ve got the appropriate condiments for your hamburgers.

There’s a bottle of ketchup lurking in the back of the fridge, some mustard sitting in the door and a jar of pickles hiding behind the orange juice. Frankly, you can’t remember the last time you used any of them.

So it’s decision time: Do you use the items, even though they’ve been in the fridge for awhile? Or do you halt your grilling experience for a quick run to the grocery store?

If you’re hoping for the easy way out, Susan Moores, a dietitian and spokeswoman for the American Dietetic Association, has some bad news for you.

“If it’s something you don’t use very often, like Tabasco sauce, and you can’t remember how long it’s been in there, it’s always a good idea to change it out,” she says.

Deciphering products’ “sell-by,” “expiration” and “best-if-used-by” dates can be a challenge, Moores says. And just because a date has passed doesn’t always mean a product can’t be used.

On a perishable such as yogurt, she says, it should be tossed a week after the date on the packaging. But the condiments that make their way out of the fridge for rare appearances this time of year might be a little different.

As a general rule, Moores says, ketchup, mustard and barbecue sauce can be kept unopened on the pantry shelf for a year. Once they’re opened, they can sit in the refrigerator for six months.

Another factor in determining how long to keep a condiment is how long it’s set out during use. If you’re having an all-night party, and the food has set out for longer than two hours at room temperature, Moores says you should throw it out.

Salad dressings can be kept on the pantry shelf unopened for a year, and for three months opened in the refrigerator, Moores says. And peanut butter – despite having a reputation for lasting forever – should be refrigerated and tossed two months after opening.

Some other items, such as soy sauce, can be kept longer once opened because they have a high vinegar content and don’t contain anything for bacteria to feed off of, Moores says.

Even then, there might be culinary reasons for tossing the products.

“It may be safe, but the quality has probably changed,” she says.

She also warns that children and older adults are more susceptible to foodborne illnesses than are other adults. That should factor into the decision of whether to use, say, mayonnaise that’s been in the fridge around two months – about the longest it should be kept once opened.

“If there’s any question,” Moores says, “it’s just so much better to get another jar.”

And if you’ve decided to do some spring/summer cleaning in your refrigerator, Moores has a few more suggestions:

¢ Buy a thermometer, to make sure you fridge is set around 40 degrees.

¢ Don’t store your perishables (such as eggs, milk and butter) in the door. Because it swings open, the temperatures tend to fluctuate more there.

¢ Wipe down the entire fridge, including drawers, to eliminate bacteria.