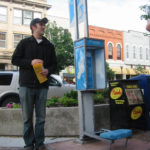 “Prayer Booth” has traveled to Kansas City, Chicago and New York City, but never before has the sculpture experienced damage as it has in Lawrence.

“Nothing this bad, honestly,” said artist Dylan Mortimer. “We’ve seen a lot of graffiti. The reaction has been all over the board. People have been offended, used it jokingly and used it sincerely. It’s been really entertaining.”

Mortimer describes his sculpture as a public prayer booth. Made from an old telephone booth, the artwork features a design with folded hands instead of a telephone and a kneeler that folds down.

The piece was installed at Seventh and Massachusetts streets for about three weeks before it was damaged.

“It was knocked off its mounting,” said City Management Analyst Michael Tubbs. “Someone had to rock it and knock it over.”

According to a police spokesman, that’s exactly what a witness said happened early Monday to “Prayer Booth,” which is one of eight pieces in the 2007 Outdoor Downtown Sculpture Exhibition.

Lawrence police received a call about the vandalism at 2:57 a.m. Monday. When they arrived at Seventh and Massachusetts streets, the artwork, which was bolted into concrete, had been knocked over. A witness told police he saw a man in his early 20s shaking “Prayer Booth” back and forth.

“Somebody had a lot of energy Sunday night, or they had a lot of help,” said John Reeves, a member of the Lawrence Arts Commission who leads the Outdoor Downtown Sculpture Exhibition Committee.

The artist believes the vandalism was likely in response to the sculpture’s topic. Mortimer said he’d feel annoyed if someone pushed it over in an act of drunkenness, adding that he understands the piece touches on a controversial issue: praying in public.

“My intention is for people to use it or to laugh at it, and some people just scowl at it. All of those are valid reactions to me. The point is to just spark some dialogue, which it did,” said Mortimer, who is also a pastor in Kansas City, Mo.

A police spokesman pointed out this is not the first time part of the sculpture exhibit has become the target of vandalism. Last year, a piece called “Future Man” had to be removed from Ninth and Massachusetts streets. In 2004, the sculpture “Self-Portrait as a Midget” was moved to a spot outside the Judicial and Law Enforcement Center after it was damaged several times.

“Anytime you put art in a public space like that, it’s vulnerable, but that’s not a reason not to put things that are intriguing,” said Dave Loewenstein, a member of the Lawrence Arts Commission. “And it shouldn’t discourage the arts commission from continuing to do it.”

Meanwhile, “Prayer Booth” is being held by police, and Tubbs plans to assess the damage with another city employee today. He thinks the sign at the top of the booth is damaged as well as the base where it broke away from the bolts.

If the sculpture can be repaired, Mortimer hopes to have it standing outside the Eldridge Hotel again soon.

“I’d love to get it put back up and for people to use it to pray,” he said.

Police continue to investigate this act of vandalism. The witness describes the man seen shaking the artwork as about 225 pounds, 6-foot-4, with black hair. He was wearing a University of Texas hat and T-shirt, khaki shorts and white tennis shoes. The witness saw him get into a black Toyota Camry and head east on Seventh Street.