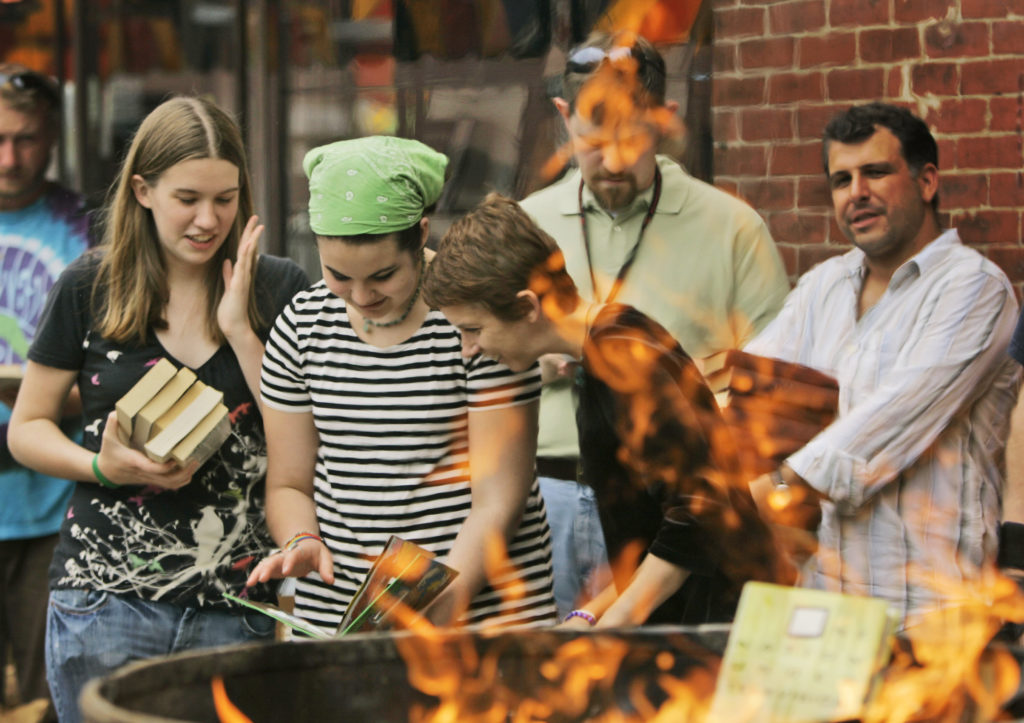 Book store customers buy up books that are set to be burned at Prospero's Books in Kansas City, Mo. Bookstore owner Tom Wayne staged a book-burning Sunday to bring attention to society's diminishing demand for books and other printed materials.

Kansas City, Mo. ? During the 10 years Tom Wayne has operated Prospero’s Books, a used bookstore in midtown Kansas City, he has amassed thousands of books in a warehouse.

Ranging from best-sellers such as Tom Clancy’s “The Hunt for Red October” and Tom Wolfe’s “The Bonfire of the Vanities,” to obscure titles like a bound report from the Fourth Pan-American Conference held in Buenos Aires in 1910 and a textbook on beginning Polish, the books won’t sell. Wayne said even local libraries and thrift stores have told him they’re full.

On Sunday, Wayne began putting them to the torch, tossing scores of books into a burning cauldron to protest what he sees as society’s diminishing support for the printed word.

“This is the funeral pyre for thought in America today,” Wayne told spectators outside his bookstore as he lit the first batch of books.

The fire blazed for about 50 minutes before the Kansas City Fire Department put it out because Wayne didn’t have a burning permit.

Wayne said he will get a permit for next time. He said he envisions monthly bonfires until his supply – estimated at 20,000 books – is exhausted.

“After slogging through the tens of thousands of books we’ve slogged through and to accumulate that many and to have people turn you away when you take them somewhere, it’s just kind of a knee-jerk reaction,” he said. “And it’s a good excuse for fun.”

He said he has noticed a decline in customers in recent years and perceives more people getting information from television or the Internet. He pointed to a 2002 study by the National Endowment for the Arts that found less than half of adult respondents reported reading for pleasure, down from almost 57 percent in 1982.

Anecdotally, the number of used bookstores in Kansas City have declined in recent years and there are few independent bookstores left in town, said Will Leathem, a co-owner of Prospero’s Books.

Dozens of customers took advantage of the event, scouring the pile of books waiting to go into the fire, looking for last-minute bargains. Mike Bechtel paid $10 for a stack of books, including an antique collection of children’s literature, which he said he’d save for his 4-year-old son.

“I think given the fact it is a protest of people not reading books, it’s the best way to do it,” Bechtel said. “(Wayne has) made the point that not reading a book is as good as burning it.”