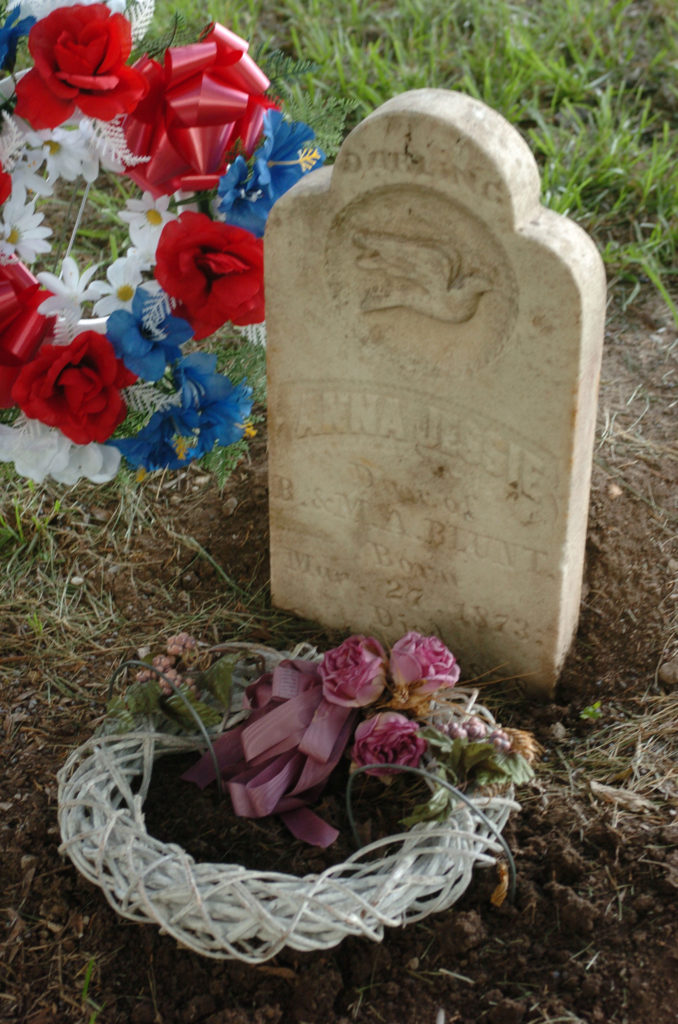 Wreaths lie near the tombstone of Anna Jessie, who died at age 5 in 1878, at Clinton Cemetery. The tombstone, which a farmer found on his land, was moved last fall from the Wakarusa River Valley and Heritage Museum to the cemetery. 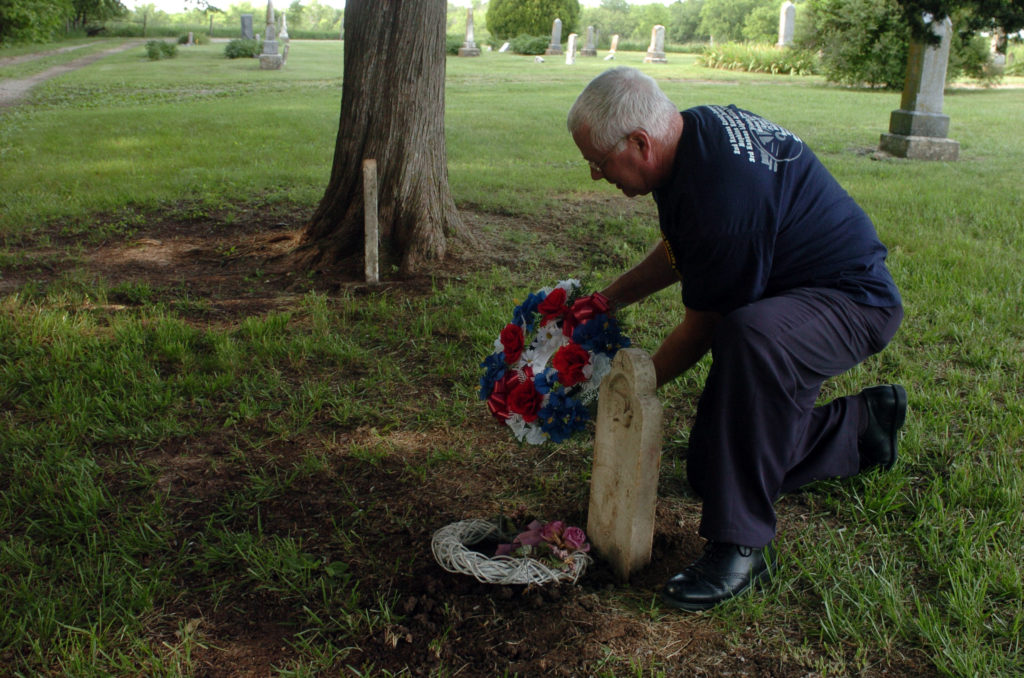 Bob Wandel, a member of Sons of Union Veterans, places a wreath near the tombstone of Anna Jessie, who died at age 5 in 1878, at Clinton Cemetery.

No one knows where the little girl’s body is buried, but the white marble tombstone that bears her name has a final resting place in Clinton Cemetery. Thanks to members of a Lawrence organization called the Sons of Union Veterans, it was placed there last fall.

“I am just delighted. It’s just like it has always been here,” local historian Martha Parker said as she stood under shade trees by the tombstone at the far end of the little cemetery.

For years the stone had been on display in the Clinton Lake Museum. A farmer had uncovered it while plowing a field near the intersection of U.S. Highway 24-40 and Douglas County Route 442, also called Stull Road. Not knowing where the grave was or what to do with it, the tombstone was given to the museum.

Parker, who is the director of the museum that is now called the Wakarusa River Valley and Heritage Museum, did research and found out more about the Blunt family. The girl’s parents were Ben Blunt, an American Indian born in North Carolina in 1817, and Mary Blunt, who was black and 16 years younger than her husband. They came to Kansas sometime between 1862 and 1864.

An 1875 Kansas census record shows that Anna Jessie had three brothers and one sister ranging from 9 months to 13 years old. An old mortuary record showed that one of the Blunt’s sons also was buried, but it is not known where, Parker said. The son wasn’t named, nor was his age given.

Ben Blunt and his wife are buried in unmarked graves in Lawrence’s Oak Hill Cemetery. He died in 1904; she died in 1903.

The exact location of the family farm is not known, although Anna’s tombstone may have been on or near it, Parker said. It is not known how Anna died.

Bob Wandel, a member of the SUV’s Samuel J. Churchill Camp No. 4, saw the tombstone in the museum one day last year while doing research on Civil War veterans. Parker told Wandel about the tombstone. Wandel got with another SUV member, Delmar Koch, and the two of them spent time one day placing the tombstone in a concrete base at the cemetery.

Parker had checked with the cemetery sexton and a location for the marker was chosen only a few feet from the tombstone of Nickerson Cowen, a black slave freed when Abraham Lincoln signed the Emancipation Proclamation in 1863.

“I think it’s great that it is out where people can see it,” Wandel said. “Knowing that it’s a little girl, that kind of hits home.”

Anna is buried among many former slaves and black soldiers from the Civil War era.

“Most of the stones are those of black families, and there are unmarked graves all over out here,” Parker said.