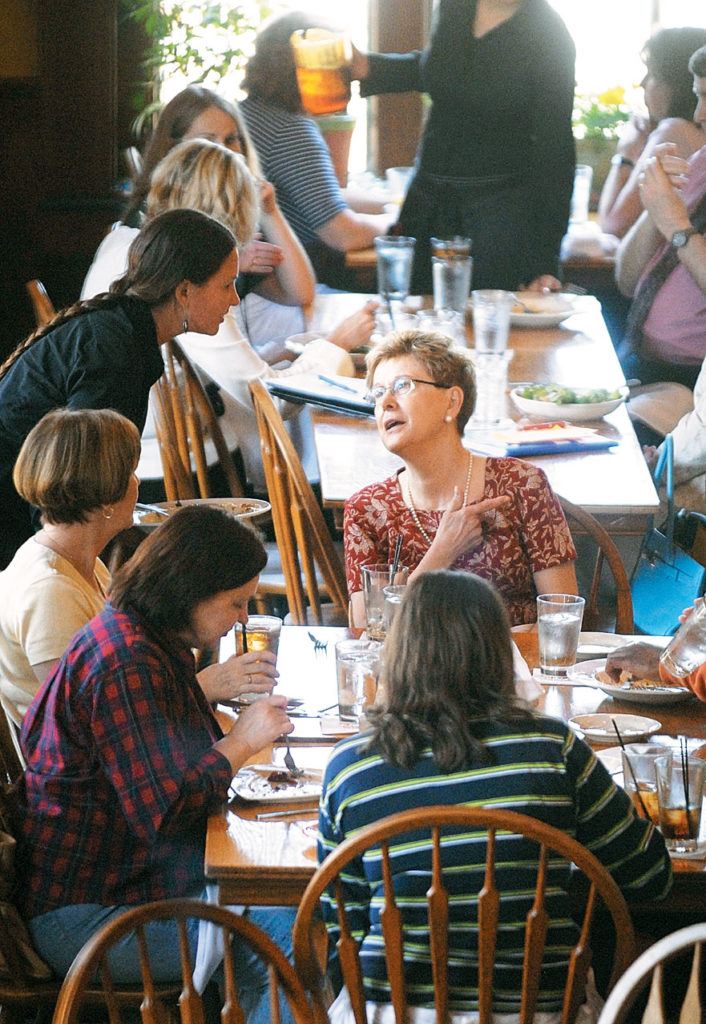 Some come directly from church. Others arrive late in the afternoon, bringing aunts, uncles, children and cameras.

And some arrive throughout the day in multigenerational groups – all to get mom out of the house and celebrate Mother’s Day in style.

The National Restaurant Association has reported that more than six out of 10 Americans will celebrate Mother’s Day with a meal at a restaurant.

And a sampling of Lawrence restaurants indicates that those figures hold up locally.

“Traditionally, it’s the second busiest day of the year for us at the restaurant – Valentine’s Day being the busiest. Mother’s Day is a close second,” Butland said.

“Traditionally, a big part of our business is large families coming out to honor mom and have Mother’s Day dinner or lunch,” he said.

He plans to feature the regular menu, plus at least four specials.

“When the weather is nice people come in dressed up after church, after having a Mother’s Day event at their home,” he said. “We’re always in a really good mood, and we’re excited because we know it’s going to be a fun day.”

He said it can be stressful and hectic, but it is a great day for the restaurant.

“Last year we had some families that came in that were four- and five-generation families,” he said. “I thought that was kind of cool when you see a great-great-grandmother come in who is 95 years old, followed by a grandmother, followed by another grandmother and it’s just on down the line,” he said.

Across town, Jenny Hoyt, one of the managers at Teller’s, 746 Mass., said she’s found that Easter, Mother’s Day and graduation attract big family gatherings to the restaurant.

She said Teller’s will have its usual brunch buffet from 9 a.m. until 2 p.m. on Mother’s Day.

“Typically, we do the same brunch that we usually do with a few other nice things on there. Then for dinner, we will run some really nice dinner specials,” she said.

Seating usually isn’t a problem for big groups, she said. However, reservations are recommended.

“We have three floors at Teller’s, so we use the second and the first,” she said. “And we can set up : parties of five or more wherever it needs to be done.”

Most customers are in good moods, she said.

“It’s not a stressful holiday, so everyone seems to be well-mannered and content,” she said. “The mothers seem pretty excited to be here with their families.”

Mother’s Day is a big tradition at the Eldridge Hotel, 701 Mass., according to Scott Valentine, general manager of Ten, the hotel’s restaurant.

“We do a big Mother’s Day brunch that runs from 10 to 3,” Valentine said. “The majority of our business will be done for the brunch. We’ll serve approximately 600 to 650 guests between that time frame.”

He said the day is usually among the top five busiest days at the restaurant.

“Usually it’s families that come. Most are dressed in church attire,” he said.

Larger groups usually gather on Mother’s Day, including the mother and grandmother, plus sometimes aunts, uncles and other relatives, he said.

“In our lobby, we’ll take photos of the families with a digital camera,” he said. “We’ll print them off and put them in a little frame for them so they can remember their Mother’s Day.”

Will Valentine be treating his own mother that day?