Mickey Morang was sound asleep when he was awakened by what he thought was the sound of gravel hitting a window.

“I got up to investigate and just as I was putting my clothes on I heard this big crack,” Morang said, as he recalled that July morning last year. “A crack ran up the wall across the room from me.”

Behind the two-story building where Morang lived in downtown Galena a large sinkhole had developed. The sinkhole collapsed the back part of the brick building that housed two apartments. Morang, 57, lived on the top floor and his 80-year-old mother lived on the first floor.

They escaped before the sinkhole brought down part of the apartment building. It also put the town’s only remaining bar out of business – and the livelihood of Morang and his mother, Opal Currey.

Beneath the ground of Currey’s building, the ceiling of an old mine had given out. In a town where lead and zinc mining ruled for 100 years, Galena was forced once again to confront its historic legacy. Darrell Shoemaker, a Galena city councilman and member of the city’s mining task force, estimates that 50 percent of the town of more than 3,200 people is undermined. Ground collapses have occurred periodically in and around Galena for years.

“If you were raised around here, then you know the history,” Morang said. “It can happen anytime, anywhere. It’s not something you think about every day.”

It’s been more than 30 years since the last lead and zinc mine closed in Cherokee County. Undermining is just one aspect of the damaging environmental effects left from years of mostly unchecked mining practices that are still evident. In 1983 the federal government placed the southeast corner of the county on a priority list for environmental cleanup. It became a Superfund site for the Environmental Protection Agency to deal with.

Mountainous piles of “tailings” or chat rose up around Galena, Baxter Springs and Treece. The tailings are a waste product from digging in the mines to get to the lead and zinc ore.

“Some people look at them and think it’s harmless gravel, but nothing could be further from the truth,” said Dave Drake, project manager for the Superfund Program in the EPA’s Region 7. “It is highly enriched in heavy metals.”

Dust from the chat, which carries particles of lead, zinc and cadmium, can be carried into residential yards and into bodies of water. Children, simply playing in yards, can get waste metals on their hands and track them into their homes. As they put their hands in their mouths, lead can get into their bodies. Children sometimes play on abandoned chat piles and so have adults, riding dirt bikes and motorcycles. 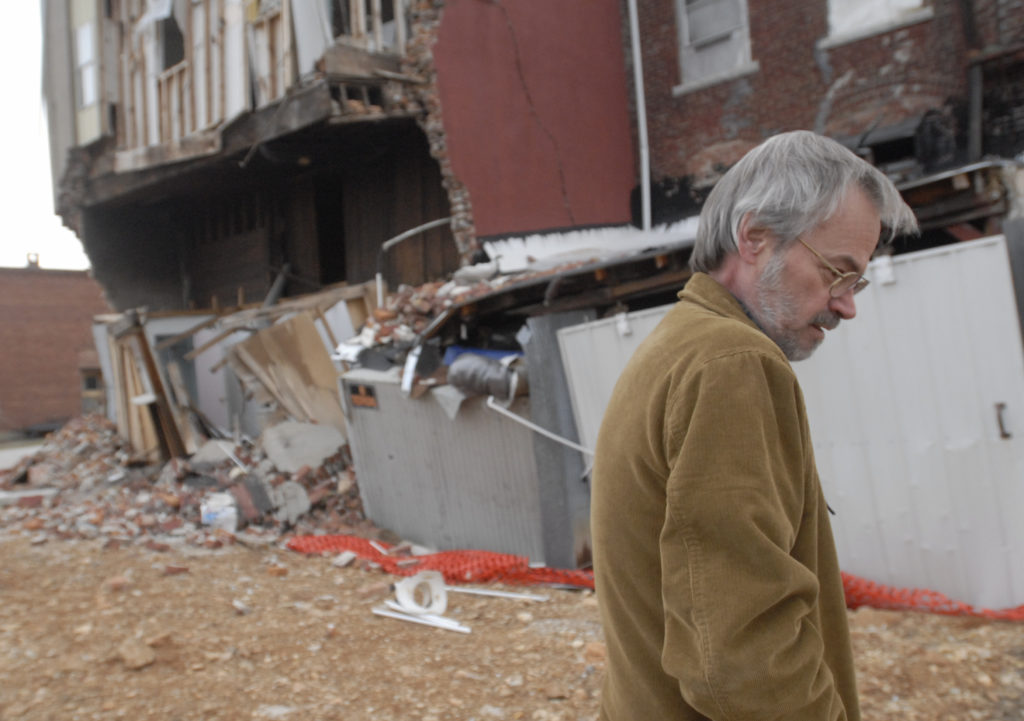 Mickey Morang and his mother lost their business and living quarters to a ground cave in caused by undermining in Galena, Ks. Morang, who operated the the downtown bar Green Parrot with his mother, has since moved to Baxter Springs where he is unemployed. We

A 1991 study of more than 50 children in Galena showed that nearly 10 percent had blood lead levels of 10 micrograms per deciliter or higher, according to the Kansas Department of Health and Environment. A 10 and higher is considered lead poisoning, but levels at 5 and above also are a concern, according to KDHE. Elevated blood lead levels can cause learning and developmental problems in children. In adults, it can cause neurological problems.

Adding to the pollution problem in Galena was a smelter, which heated the lead and zinc ore to separate the metals. Smoke from the smelter went into the atmosphere and spread just like the mine tailings dust.

Rain has carried runoff from the polluted soil into bodies of water. Water filled abandoned mines, picked up more mine waste – then leaked into streams and contaminated the ground water.

“It takes a lot of time and effort and money to change that landscape,” Drake said.

The Cherokee County Superfund site covers 115 square miles around Galena, Baxter Springs and Treece. Cleaning it up began in the late 1980s.

By 2007 more than 1,200 acres of mining wastes, including tailing piles, had been cleaned up, according to an EPA report. Nearly 800 residential properties had been excavated and backfilled with clean soils, and more than 500 homes had been provided a clean source of water, the report states.

Heavy construction equipment was brought in to grade the piles of mine tailings into a more natural, flatter feature, Drake said. It was then capped with clay and top soil. The ground was revegetated with a mixture of hay and prairie grass.

A few blocks northeast of downtown Galena is an area that once was so notorious for mine wastes and pollution that local residents called it “Hell’s Half-Acre.” The area was cleaned and today it is mostly clear but rough, revegetated ground. It is still a problem area, however, because it is undermined and sinkholes still occur. 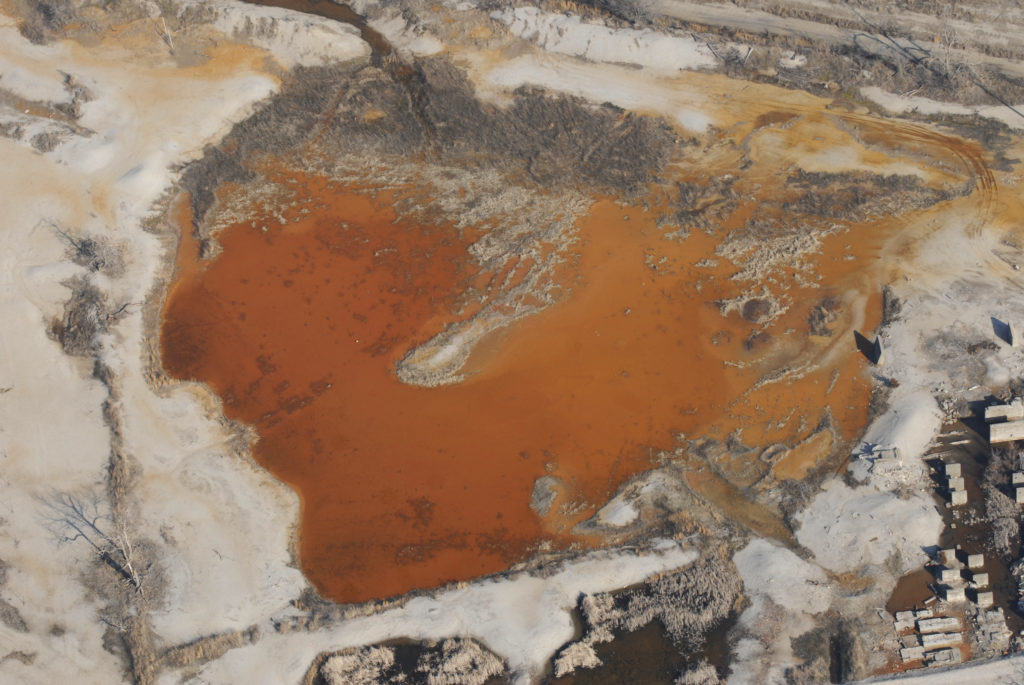 A fenced-off area at Hell’s Half-Acre contains the contaminated dirt removed from remediated yards in Galena.

“There is still some follow-up work to be done,” Drake said. “It is an area that really should not be developed.”

Over the past two years, the Surface Mining Section of the Kansas Department of Health and Environment has filled and covered about 60 sinkholes and open mine shafts in the lead and zinc mining areas. Several white posts set in concrete mark where ground openings were closed in a field north of Galena’s city hall and police station. There are still many more to close throughout the Superfund site.

Galena is working with KDHE and U.S. Rep. Nancy Boyda to obtain a $500,000 matching federal grant to conduct tests that should to determine how deep the mines are and how thick the ground is above the ceilings in those mines. The city or some local entity must come up with half of the money.

“The main concern is around the school area first,” Councilman Shoemaker said, referring to the high school and junior high complex. “Then Main Street to stabilize the business area.”

The schools are thought to be on or near an abandoned mine. A short distance from the football field is a massive, decades old water-filled sinkhole. It is an authorized city dumping ground for old tires. Years ago it was a swimming hole. 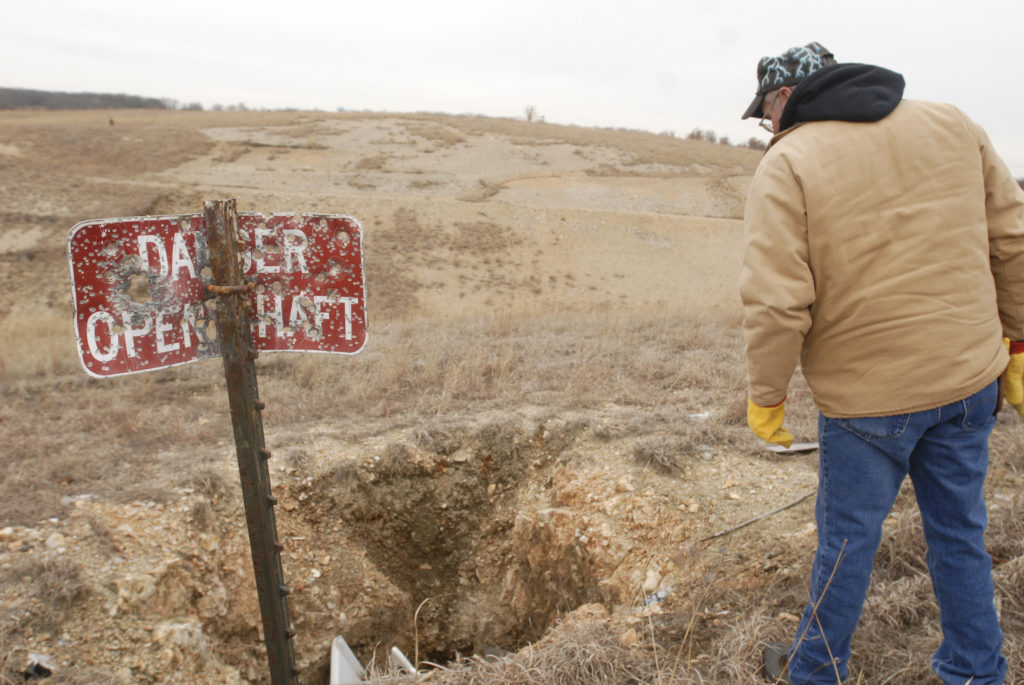 A bullet-ridden sign warns passersby, including Randy Johnson, of an open mine shaft leading to hundreds of feet into the ground near Galena, Kan. The old mining areas in southeast Kansas are covered with these holes.

When ground testing is complete it will still take years and millions of dollars to fill in those underground mines. One method being considered is to take the chat, or mine waste, from the remaining piles around Treece’s lead and zinc sites and pump it into Galena’s mines, Shoemaker said.

Millions spent; more to do

To date, the cost of cleaning up southeast Cherokee County has been $80 million to $90 million, Drake said.

“It’s quite a large expenditure but in terms of social and environmental gain I think it is worth every penny,” Drake said. “For most of the area I think it has been pretty positive. I think the health of the people has greatly improved.”

In 2000 a new study of blood lead levels in Galena children was conducted. It included 100 children, a larger number than the 1991 study. The percentage of children exceeding 10 micrograms per deciliter of lead in their blood was slightly lower, having dropped from 10 percent to 6 percent.

Taxpayers nationwide pay the bills for cleaning up Superfund sites. If they can be identified, the mining companies responsible also share that cost. But that identification is difficult because many of the mining companies are defunct or have changed names and ownership over the years. If they can be identified, the EPA works with the companies to determine how much of the cost they should be responsible for, Drake said. It’s usually a lengthy negotiation process, he said.

A panoramic view of chat piles outside Treece, Ks., where Michael Spahn views the landscape.

Mining companies have paid from $10 million to $15 million dollars for cleanup costs, Drake said. He estimates it will take another 10 to 15 years and another $50 million to $70 million to finish the cleanup.

It wasn’t until the 1970s that the public began to understand the seriousness of the environmental damage caused by decades of unchecked mining practices.

“I think that if there is one environmental lesson to be learned that the last 20, 30, or 40 years have taught us is that it’s a hell of a lot easier to prevent a problem than it is to fix it once you’ve got it,” said Rex Buchanan, associate director of the Kansas Geological Survey in Lawrence. The survey has conducted studies of the geological terrain in the Superfund site.

Despite the efforts of the EPA and the state, people in Treece say spending more money on cleanup isn’t going to help the residents of their town much. If the town is going to cave in someday, what difference will it make, they say.

Adjacent to Treece is the town of Picher, Okla. The threat of the town collapsing because of undermining is so great that the state and federal government have approved a buyout that will allow residents to move out.