‘Man of vision’: New director of emergencies takes over

“The sense of the importance of volunteering was ingrained in me as a child,” Schmitt said. “I’ve pretty much lived my whole life donating.”

Schmitt spent a large part of his boyhood volunteering with and raising money for the Veterans of Foreign Wars and the Fraternal Order of Eagles in Lawrence.

When he moved from Lawrence to rural McLouth in Jefferson County in 1995, he saw a need in the community for volunteer firefighters and stepped forward. He has volunteered with the Sarcoxie Township station for six years and spent a year as chief at that station.

“When you live in a city, you just expect certain services and when you move to the country you realize it’s all up to us,” Schmitt said.

Schmitt said his firefighting experience, coupled with the five years he spent as a foreman at the Barton Solvents chemical plant in Kansas City, Kan., prepared him for the responsibilities of his new position.

As emergency management director, Schmitt is responsible for coordinating all the branches of Jefferson County’s emergency services, including the health, sheriff and fire departments, 911 dispatch, ambulances and public works. He makes sure community agencies and residents are trained and prepared to act in the event of any emergency situation, and he creates the plans that ensure all groups act together effectively.

Following Hurricane Katrina and the intense scrutiny it sparked for emergency management, the Federal Emergency Management Agency underwent a complete reorganization. Schmitt said Jefferson County is still dealing with the effects of the reorganization.

“I’m reworking emergency plans that were in place,” Schmitt said. “There’s the challenge of planning for the future, while taking past experience and information and molding it with current information.” 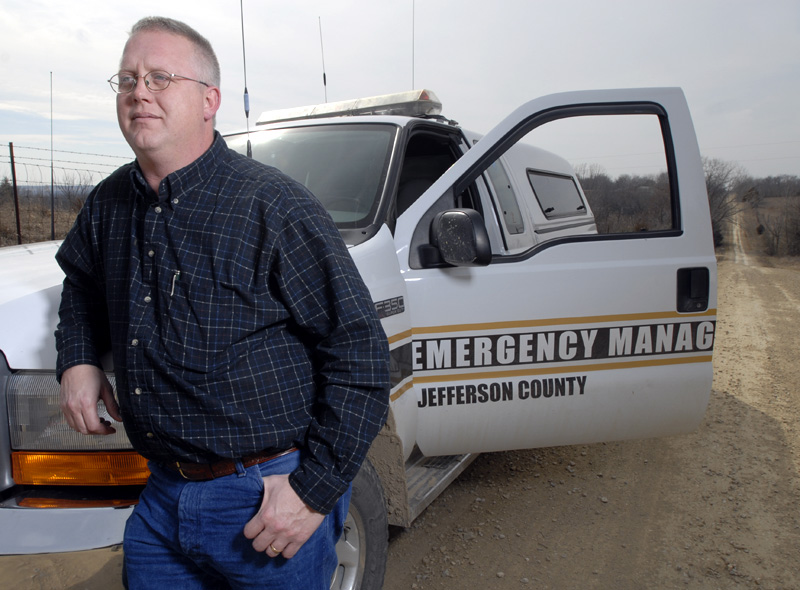 Doug Schmitt is the new director for emergency management for Jefferson County. Schmitt, of rural McLouth, has spent the past six years volunteering with the Sarcoxie Township fire station and spent a year as chief there.

Scott Morris, director of FEMA in Florida, is delving into the issues faced by emergency management teams across the country in a study group at Kansas University sponsored by the Dole Institute of Politics. The group is known as “The Politics of Disaster.”

Morris said the challenges faced in rural areas, such as Jefferson County, are especially daunting.

“Those are the counties I worry about most,” Morris said. “Disaster can hit harder and is easier to overlook in smaller communities that have less resources.”

Morris said Schmitt’s position is vital to the county because in the event of an emergency he knows the community “inside out,” and he will be the one to organize the first teams on the scene.

“Citizens will look to his leadership,” Morris said.

Susan Newell, director of the Jefferson County 911 communications center, is confident in Schmitt’s ability to help lead the county.

“There’s a new sense of direction and growth in emergency services,” Newell said. “He’s a man of vision and I can see Jefferson County making tremendous strides.”

In addition to the litany of responsibilities his new job entails and days that keep him at his desk until midnight, Schmitt is still volunteering. His position required that he step down as fire chief at the Sarcoxie station, but Schmitt remains a volunteer firefighter.

“I fell in love with it and I guess I just can’t give it up,” he said.