The white Adio tennis shoes, size 9 1/2, stood no chance of making it to a Dumpster.

One night, when Alex Busche decided the shoes were finally worn out, he tied their laces together, walked to the sidewalk outside his apartment at 14th and Tennessee and heaved them skyward.

On the first try, the shoelaces settled on top of the power line.

“My shoes were already pretty messed up,” says Busche, a Kansas University junior from Olathe. “I thought I’d just leave my mark.”

That was more than a year ago, and the shoes are still dangling from the power line like a silent wind chime. Now, two copycat sets of footwear – a pair of black tennis shoes and a pair of brown work boots – also adorn the line.

This isn’t the only place in town where the power lines have a little extra decoration. Drive around Lawrence long enough, and chances are you’ll probably see a pair of shoes hanging from a power line.

After he bought his first home in Minneapolis in 2004, he started noticing that a lot of shoes seemed to be popping up on power lines in his neighborhood.

Long story short, he became fascinated with why this happens. He coined the term “shoefiti,” thinking that the shoes, when left unremoved, resembled graffiti that isn’t painted over.

He even started a Web site, www.shoefiti.com, which tracks shoe/power line news.

Kohler isn’t surprised the shoes show up on Lawrence power lines. The town he’s seen with the most shoefiti is Bloomington, Ind., another college town. 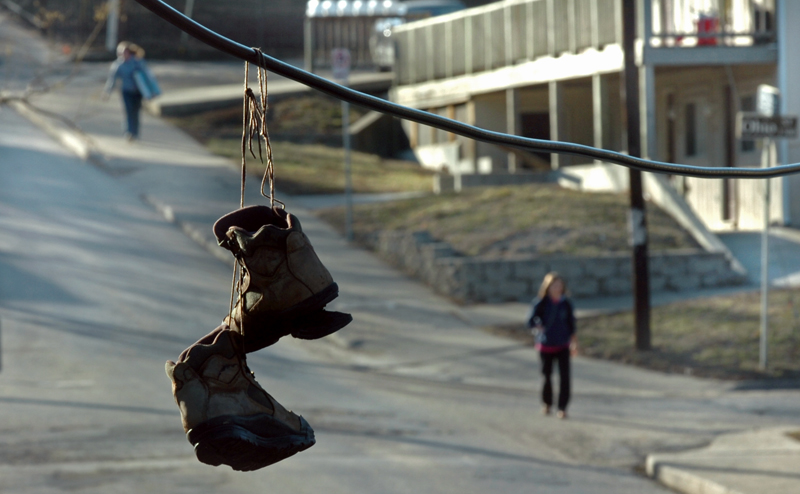 An old pair of boots dangle from a power line as pedestrians make their way down 14th Street near Tennessee late Wednesday afternoon.

¢ A celebration for a rite of passage, such as a graduation.

¢ Hazing, such as throwing a freshman’s shoes over the line.

¢ A memorial, to commemorate someone who died near the site.

The other two theories are more controversial:

¢ Shoes signify a place to buy drugs is nearby.

¢ They’re a sign of gang-related activity, such as marking territory or commemorating a gang murder.

“I’m uneasy about making definitive statements about the last two,” Kohler says. “First, it’s hard to prove, and second, it’s bound to create hysteria among people who will assume all shoes on power lines are somehow gang-related.”

But even that perception, he says, might make shoefiti removal important.

“A lot of people correlate shoefiti with drug or gang activity whether it’s actually the case or not,” he says. “This is one of the reasons cities should pay attention to shoefiti. Why would you want people driving through your city to think there is drug dealing or gang activity based on something that can be easily addressed in a few minutes with a utility truck and some scissors?”

Kohler says cities such as Cleveland and Los Angeles have made an effort to remove shoefiti as quickly as possible.

He says some of the less desirable elements in Minneapolis find the shoes to be an eyesore. 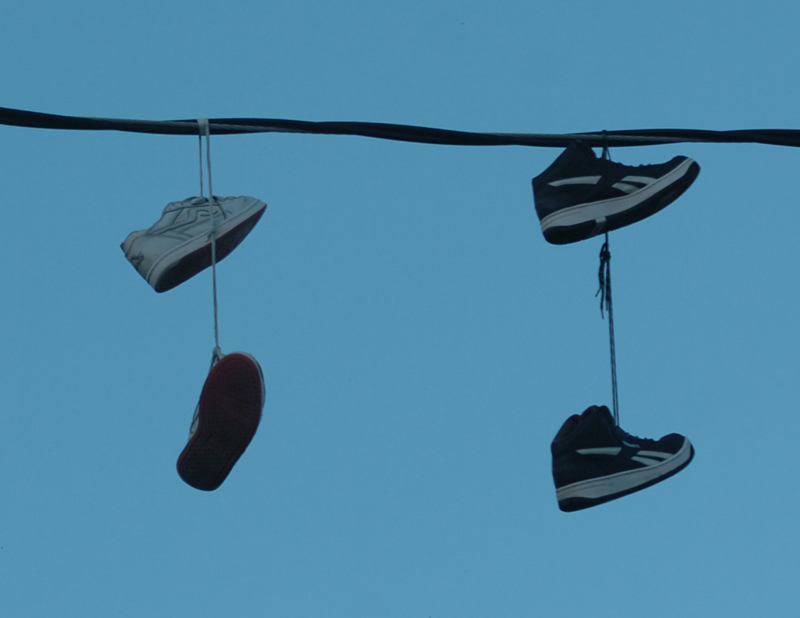 MORE pairs of shoes dangle from the power line near the intersection of 14th and Tennessee streets. Westar Energy spokeswoman Karla Olsen says the company doesn't make special trips to remove shoes from power lines unless they cause a power disruption.

“When in a tougher neighborhood one time, I asked a hooker why she thought the shoes were on power lines,” Kohler says. “She said she didn’t know but thought it made the area look ‘ghetto.’ That was ironic coming from someone selling sex on the streets.”

Despite the perceptions, don’t expect the dangling shoes in Lawrence to come down anytime soon.

“We don’t make special trips to go out and get shoes unless it’s causing a power disruption,” says Karla Olsen, a spokeswoman for Westar Energy.

Olsen says she doesn’t think most of the shoes were tossed with malice.

“That seems to be a traditional prank by college students,” she says. “We don’t take it that they’re out to get us or anything.”

Kim Murphree, a spokeswoman for the Lawrence Police Department, says none of the officers she spoke with could remember a complaint about someone throwing shoes on power lines. And Lisa Patterson, a spokeswoman for City Hall, says nobody she talked to there thought it was a particular problem in Lawrence.

“It could be a community issue,” she says, “but they’re not coming to City Hall to complain about it.”

That’s fine by Busche, the KU student and shoe-tosser. He doesn’t see the harm in it.

In fact, he might not be done with his shoefiti.

“I’m waiting until my shoes crap out,” he says, “and I’ll probably throw them up there again.”