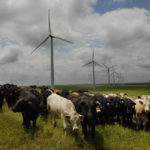 Cattle gather underneath the 389-foot-tall wind turbines at the Elk River Wind Project along U.S. Highway 400 in southeastern Butler County. Each turbine generates ,000 annually for the property owner and enough power for 300 to 500 houses.

Hays ? Jacinta Faber is just the kind of person you would picture advocating wind energy. She and her family buy organic food, recycle and even use low-flow toilets to conserve water.

While Faber likes the concept of wind energy, she doesn’t particularly like the idea of the almost 400-foot-tall wind turbines looming on a ridge about 2,000 feet from her house southwest of Hays.

She fears there could be health repercussions from the constant noise of the low-frequency whooping sound that the spinning turbines make and the strobelike effect from the blades’ shadows.

Faber and more than 100 other homeowners in Ellis County say the proposed wind farm – which would be a mile or less away from her home – is just too close.

“I understand green energy is a good deal, but this is not a black-and-white issue. There is a lot of gray,” Faber said.

Governments – and consumers – are looking to wind energy as a way to reduce carbon emissions and diversify the country’s energy supply. Wind is an abundant and renewable energy source. Once the wind turbines are built, there are no polluting emissions.

And wind energy is even more attractive in a state that is ranked third in the country for the potential development of wind-generated electricity.

In Gov. Kathleen Sebelius’ State of the State address this year, she set a goal of having 20 percent of the state’s electricity come from wind power by 2020.

From Sherman County to Butler County, proposals for wind farms have popped up.

Jim Ploger, manager of the climate and energy programs for the Kansas Energy Office, said pending projects – such as the one in Hays and another in the Smoky Hills – could double the state’s wind-powered electricity in the next few years.

“Especially out in western Kansas, it’s as good of quality wind resource area as almost anywhere in the world,” Ploger said.

For years, state Rep. Tom Sloan, R-Lawrence, has advocated for the use of more wind power. And that’s not just because it is good for the environment and economically feasible to produce commercially.

Wind farms would benefit the ranchers or farmers who are having a hard time making a living and rural towns that are losing population, Sloan said.

“It’s another way of keeping people on the land, of keeping these small towns viable,” he said. “And for the people in Lawrence it’s a way we wouldn’t have to support their infrastructure, their schools, their hospitals, their roads to the same extent if the people continue to depart, flee, die in those counties.”

Ploger – who has never read of any documented health-related side effects from wind turbines – said the health care costs linked to energy produced by fossil fuels add up to $900 million in Kansas.

The Sierra Club has said wind farms should go up across the state, with the exception of the Flint Hills, which Sebelius has designated as the “heart” of her wind energy effort.

“We do believe every form of energy has some impact. We also think that modest impacts may have to be tolerated in lieu of the major advantages of fighting global warming,” Volland said. “We are also concerned that these damages be limited, but the trouble is the science doesn’t really give us a strong handle on what those are.”

That is exactly what a Congress-requested report from a National Research Council panel implied last month. In the report, it was suggested that more research needs to be done on wind turbines’ effects on birds and bats and that better data was needed to put regulations in place.

In Kansas, there are no state regulations for wind farms. The restrictions – if any – are imposed by local zoning codes.

Sloan said state lawmakers have discussed – and discarded – the idea of having more regulations on wind farms.

“The Legislature and a vast majority of its members have said this is a local decision. This is no different than where someone would site a grocery store or a housing development or the local water treatment plant,” Sloan said.

With a decision from the Ellis County Commission pending, the debate about the wind project has come to a boil in Hays.

Competitive Power Venture, whose parent company is Spanish-based Iberdrola, is seeking approval for a 100- to 130-turbine wind farm on 11,000 acres southwest of Hays.

The project has garnered support from the Ellis County Coalition for Economic Development. Earlier versions of the proposal were backed by letters of support from Fort Hays State University, the city of Hays and county commissioners.

Letters flowed in to the local newspaper, neighbors stopped talking and signs of protest went up in the fields on the outskirts of Hays, a town of 20,000 people about 230 miles west of Lawrence.

On Monday evening, about 50 people settled into a lecture hall at Hays High School to listen to attorney Patrick Hughes lay out the opposition’s legal rights. There were men in cowboy hats and boots and others in polo shirts and sandals. Some women arrived with carefully styled hair, trendy eyewear and capris, while others came in ponytails and T-shirts.

The arguments against the proposal are as diverse as the people opposing it. The most basic issue is the effect the turbines will have on the rural landscape. Others fear property values will go down and their health will suffer. And some just think the public process leading up to a decision was done poorly.

Faber would just like to see the wind farm moved a few miles down the road, where it would affect fewer homes. Under county zoning laws, the turbines can be no closer than 1,000 feet to homes, but the company has stated it would build them at least 2,000 feet away.

Krista Jo Gordon, the wind farm project manager, said moving the project a few miles could add millions of dollars to the cost.

When companies look for places to build wind farms, Gordon said, they consider the wind quality and the site’s proximity to existing transmission lines, which must have enough capacity to deliver the electricity to higher population centers.

Nina Pierpont, a doctor in New York, claims that the “flicker” from the shadows of spinning wind turbine blades – similar to a strobe effect – can cause people to lose their balance or become nauseated.

According to her findings, those living within a half mile of wind turbines are likely to experience “very bothersome levels of noise and flicker.”

Those in Hays also mention the work of a professor and doctor in Portugal who claim the continuous exposure to low-frequency noise from wind turbines can cause vibroacoustic disease.

The disease, which according to the researchers’ work causes the blood vessels to thicken and impede blood flow, is of particular concern to Mike and Sheryl Butler, who could be neighbors to four wind turbines.

After having coughing spells so bad that he would black out, Mike Butler has been treated for severe asthma and bronchitis. He makes routine trips to a pulmonary doctor at National Jewish Medical and Research Center in Denver.

As soon as the Butlers read about the disease, they were worried.

“All this stuff has been common words to us for the last three years,” Sheryl Butler said. “My heart just stopped.”

The Butlers have given a letter to the County Commission from his doctor stating that the turbines should be at least a mile and half from their home because of health concerns.

“If this comes in, our position is either we choose to ride this out and risk Mike’s health or we walk away from our dream home,” Sheryl Butler said.

Beyond those opposing the wind turbine project, no one interviewed for this story said there were any documented health risks to wind farms.

“What you hear from the turbines is just the whoosh of the blade carving through the air,” Sloan said. “I have not seen any scientific medical evidence in any of the publications that I read that indicates there is a real health hazard.”

As for the claims that wind farms ruin a good view, it’s open for debate, proponents say.

“It is like going to an art museum. Beauty is in the eye of the beholder. Some think they are beautiful structures, part of the natural landscape. They enhance it,” Ploger said.

Those are arguments that Jacinta Faber just doesn’t buy.

Peering out her kitchen window, Faber points to the grain elevator that is just down the hill from her home.

The difference between being neighbors to wind turbines versus a grain elevator? The turbines will be nearly double the height and weren’t there when she and her husband, Paul, bought the house.

“These are not perfect little things,” Faber said of the turbines. “We need to keep them away from people’s homes.”