Over time, hitters learn to hang in there 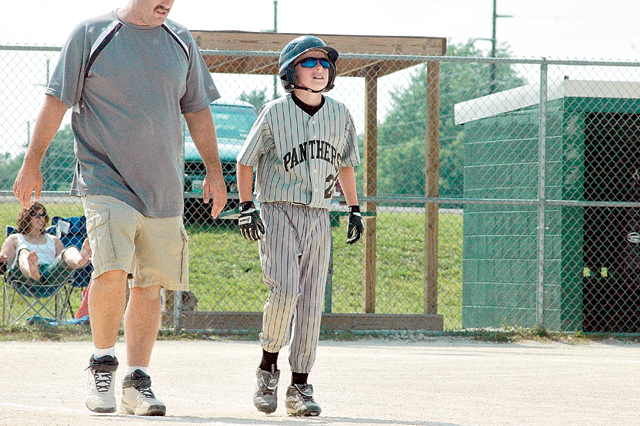 The Panthers' Alex Goertz grits his teeth after being hit in the chest by a pitch.

That’s what a baseball player usually hears – after the thud of the tightly woven leather ball bouncing off his body – when he gets hit by a pitch.

Getting hit by a high, inside fastball can sting and just the thought of it has stung many young baseball players with fear.

Coaches in the Douglas County Amateur Baseball Association, like the Panthers’ Jeff Allen, see that fear in their players and try to help them feel more comfortable in the batter’s box.

“There’s still a few of them right now that step back on inside pitches,” Allen said. “We’re trying to overcome that because we’re starting to see some curveballs and we’re just to the point that they’re learning that it doesn’t hurt that much to get hit and rather than step back they need to just curve their shoulders so they stay up.”

Allen said a lot of players in the 12-and-under division start to play dodgeball when they see an inside pitch coming.

“It’s difficult to stand in there, but it’s the transition phase,” he said of this age group.

The Storm’s Cole Cummins admitted he has been taught the proper technique – turning the shoulders and chest away from the pitch – for dealing with inside pitches, but said he often freezes up like a deer in headlights or just instinctively jumps out of the way.

“You don’t want to get hit by it obviously, but you also can’t just duck down, which I don’t do a very good job of,” Cummins said.

His father, Storm coach Jim Cummins, said players with less experience are more likely to be afraid of getting hit.

Players seem to agree with that line of thought.

“You just sort of get used to it once you’ve been hit so many times,” the Storm’s Kenny Retter, 13, said.

The Panthers’ Chris Allen got hit so many times last summer it became a running joke on the team. He just chalked it up to bad luck.

“I just thought that last year it was kind of my turn and this year it might be someone else’s turn – just kind of luck playing out,” he said.

So far this year he’s had it much easier. He has only been hit once, and that one bounced in the dirt before it reached him.

One of the reasons many young players have to worry about getting hit by a pitch is that many young pitchers lack control at times, Cole Cummins, 12, said.

“Once we get older I think there’s not going to be as much wild pitches,” he said.

Despite experience and the realization that getting plunked was not the end of the world, some players never totally escape the fear.

“I never did,” Jim Cummins said, laughing. “There’s always a little bit of fear in the back of your mind. But you take an attitude of you’ve got to be a little bit tough, and if you’re thinking about (getting hit), then you’re not thinking about your objectives.”

In other words, if a player focuses on getting a hit, he won’t worry about getting hit. Chris Allen has taken that approach.

“I just try to think positive. Think that you’re going to hit the ball and not get walked or beaned,” he said.

Cody Nelson, 18, of the Ice League Red Sox, said young players need to realize that getting hit is a part of baseball, and if they want to be successful, they can’t afford to be afraid.

“If you go up there intimidated, you’re already pretty much out,” he explained. “Just go up there with confidence.”

This past Friday Nelson got hit on his right hand, which he said might be the most painful place to be hit, in the first inning. But the righty went on to pitch a complete game despite the pain he felt every time he closed his glove on the ball.

“That’s just baseball,” he said. “People are going to get hit. There’s nothing you can do about it.”

As bothersome as the lingering pain might be, Nelson said for him the worst part of getting hit by a pitch is not getting a hit.

“The very next pitch could’ve been a strike or could’ve been my pitch,” he said of his thought process. “What could happen if you didn’t get hit is probably the worst part.”

For Nelson, having a hitter’s mentality is the best way to beat the fear of getting hit. He said when he gets nailed with a pitch he assumes the guy throwing the ball was afraid of him.