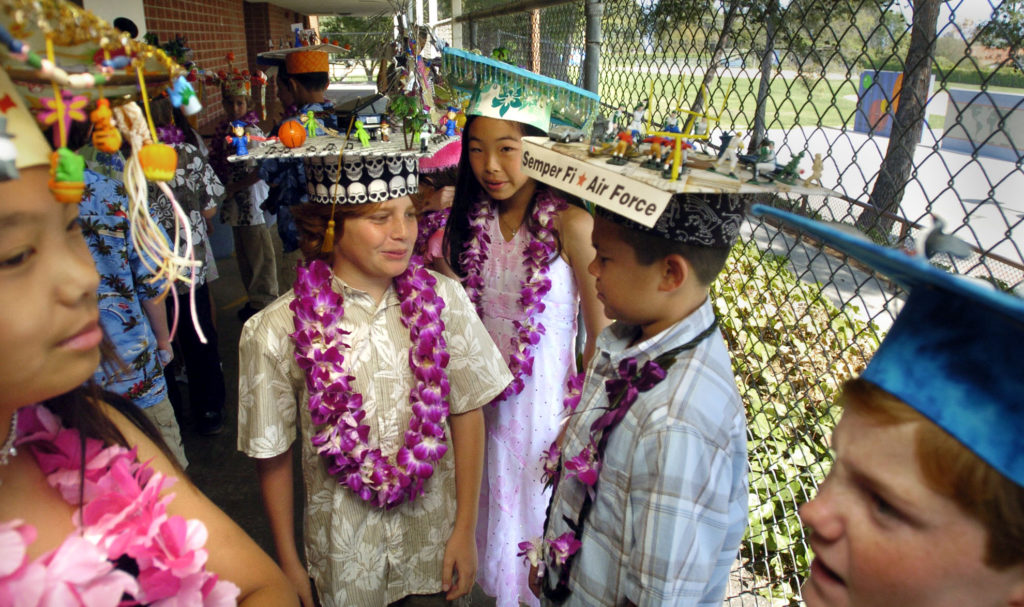 Fifth-graders at Cornerstone at Pedregal School line up for the school's promotion ceremony with decorated mortar boards in Rancho Palos Verdes, Calif. Some students who decorated their hats with plastic soldiers were made to cut off the weapons due to their school's zero

PROVIDENCE, R.I. ? Fifth-graders in California who adorned their mortarboards with tiny toy plastic soldiers this week to support troops in Iraq were forced to cut off their miniature weapons. A Utah boy was suspended for giving his cousin a cold pill prescribed to both students. In Rhode Island, a kindergartner was suspended for bringing a plastic knife to school so he could cut cookies.

It’s all part of “zero tolerance” rules, which typically mandate severe punishments for weapons and drug offenses regardless of the circumstances.

Lawmakers in several states say the strict policies in schools have resulted in many punishments that lack common sense, and are seeking to loosen the restrictions.

Issa sponsored a bill requiring school districts to decide punishments for alcohol, drug and non-firearm weapon violations on a case-by-case basis after weighing the circumstances. It passed the Senate and House and now heads for the governor’s desk.

Some have long been aware of the problems of zero tolerance. For the last decade, Mississippi has allowed local school districts to reduce previously mandatory one-year expulsions for violence, weapons and drug offenses.

“It may be a bit of self-correction that you’re beginning to see where the pendulum is coming back,” said Kathy Christie, vice president of a research clearinghouse for Education Commission of the States in Denver.

A decade ago, more than three-quarters of public schools surveyed reported adopting some version of a no-tolerance policy, according to the U.S. Department of Education.

“Zero tolerance” became a popular political buzzword during the waning days of the Reagan administration’s “War On Drugs,” and the rules spread rapidly after a series of high-profile school shootings, according to a report issued last year by the American Psychological Association.

A 1997 survey of more than 1,200 public schools by the U.S. Department of Education found that 79 percent had zero-tolerance policies against violence, 88 percent for drugs, 91 percent for weapons and 94 percent for firearms.

Some parents have mixed feelings about zero-tolerance rules. Christine Duckworth, 50, is the mother of an 18-year-old daughter who just graduated Portsmouth High School in Rhode Island, which has a zero-tolerance policy.

Duckworth said she wanted her daughter safe at school, but she said rules must reflect that teenagers make mistakes.

“I think there’s pretty much always a gray area,” she said. “You’re dealing with individuals. How can you possibly apply one law to every single person and their circumstances?”

There are some signs that policies could be changing.

Texas decided in 2005 that schools can consider students’ intent and other mitigating factors before punishing them for any offenses other than those involving firearms, and Rep. Rob Eissler said he wants the weighing of those factors to be mandatory.

“It’s hard to legislate common sense,” he said. “If we get intent into part of the code, I think we’ll be in good shape.”

Critics of zero-tolerance rules cite multiple problems. Academic achievement often lags in schools with the highest rates of suspension and expulsion, even when socio-economic factors are taken into consideration, said Cecil Reynolds, chairman of the APA’s Zero Tolerance Taskforce.

“The kids feel like they’re walking on eggshells,” he said.

Reynolds also questioned what lessons zero-tolerance rules teach, citing reports that a 10-year-old girl was expelled from a Colorado academy after giving a teacher a small knife her mother placed in her lunchbox.

“What she learned from the school was, ‘If something happens and you break a rule, for God’s sake, don’t tell anybody,”‘ Reynolds said. “Zero-tolerance policies completely ignore the concept of intent, which is antithetical to the American philosophy of justice.”