College can be incubator for success, author says 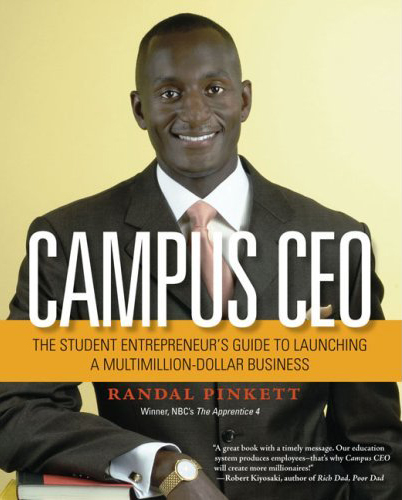 You spend tens of thousands of dollars attending college with the hope of one day landing a good paying job, maybe even one with a six-figure income.

But Randal Pinkett, the winner of a job with Donald Trump on the fourth season of NBC’s “The Apprentice,” says you don’t have to settle for being an employee of someone else. It’s possible to become your own chief executive even while pursuing your college degree.

And Pinkett has proof: Think Google, Yahoo and Facebook, all successful businesses that were founded by entrepreneurs while they were attending college.

“Believe it or not, you can have an enviable career immediately – not at some distant point in the future – just by starting your own business while you’re still a student,” Pinkett says.

If you’ve got dreams of running your own business, you might start by reading Pinkett’s new book “Campus CEO: The Student Entrepreneur’s Guide To Launching A Multimillion-Dollar Business.”

Pinkett started his own business while attending Rutgers University in New Jersey. He sold compact discs, records and tapes out of his dorm room. He also offered student workshops and seminars on leadership and developing professional skills.

In “Campus CEO,” Pinkett first describes how to pick a college that encourages entrepreneurship.

In other sections of the book, Pinkett explains how to develop a business plan, find funding for your business and maintain a balance between work and the classroom.

One thing Pinkett doesn’t do is advocate abandoning school for the executive suite. Pinkett himself holds five degrees.

I’m not typically a fan of books on how to build a business and get filthy rich. Usually it’s the author who walks away wealthy by pushing platitudes. But in this book I believe Pinkett wants to help people find their niche in life. He doesn’t view entrepreneurship as the only way to succeed but a path for a person with the right passion.

As he says: “Entrepreneurship is not exclusively about owning a business: It’s about using your talents to make a positive impact in your areas of influence, and leveraging all the resources at your disposal to create value for the greatest number of people.”