The house was built in 1956 by Donald Dean, an associate professor of engineering at Kansas University. It's now owned by Randy and Kathleen Masten, who are living this year in Washington, D.C. 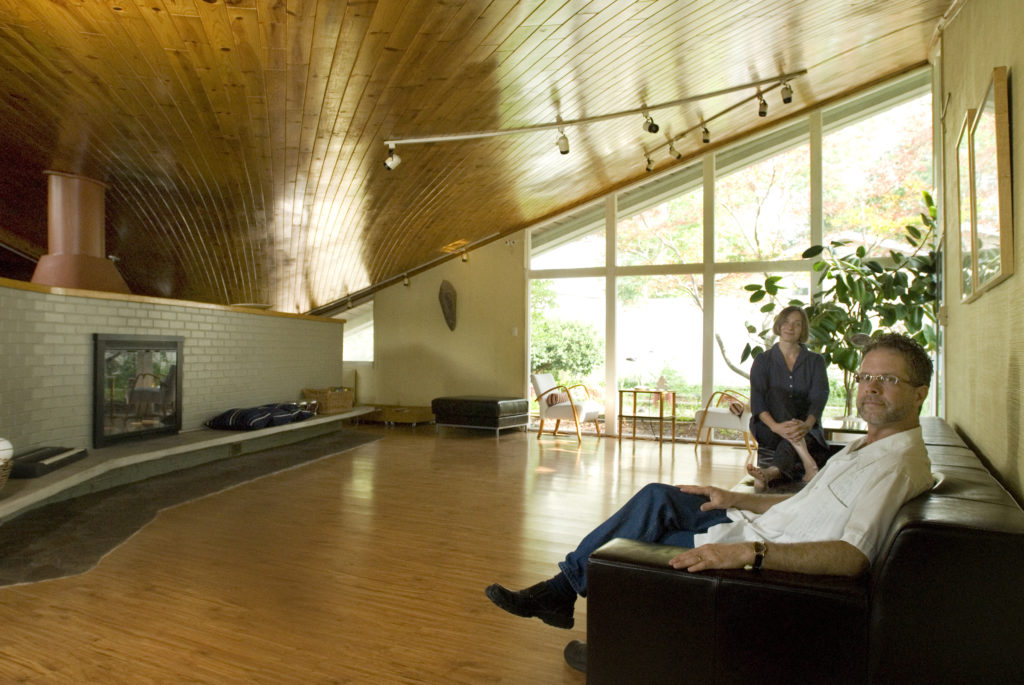 Tom Harper, foreground, started the process to add the hyperbolic paraboloid house at 934 W. 21st St. to national and state historic registers. Harper and resident Maria Holter, background, are shown in the living room of the unique modern home.

It may look more like an object from outer space, but this Lawrence fixture is inhabited by humans.

The double hyperbolic paraboloid home at 934 W. 21st St., southwest of Lawrence High School, is recognized for its pointed roof that reaches near the ground at three corners.

In 51 years, it has drawn odd looks from passers-by and interest in its unique design from others. Now it is a protected part of national history.

As he stood in the large living room on the home’s east side last week, neighbor and Realtor Tom Harper looked out as the morning sunlight from seven large windows glared onto the wood floor.

“This room is like a church to me. It’s very inspirational,” said Harper, who researched the house’s history to help add it to state and national historic registries.

The pitched ceilings inside leave large open spaces that resemble a sanctuary.

“People feel that this is somehow part of Lawrence history, and so you are a little bit on display when you live here,” said Maria Holter, whose family has rented the home for the last year.

In late June, the home that was the brainchild of the late Donald Dean, a Kansas University associate professor of civil engineering, was added to the National Register of Historic Places.

In May the home, now owned by Randy and Kathleen Masten, who are spending the year in Washington, D.C., was added to the Register of Historic Kansas Places, which makes the owners eligible for certain incentives if they want to do repairs or remodeling.

Dean, who taught at KU from 1955 to 1960, died of leukemia in 1995. He spent most of his career designing bridges and towers, but he wanted to design an inexpensive home that could be built rather quickly during a housing boom in the 1950s, Harper said.

The home’s unique design and the fact that it was Dean’s only residential work helped the Lawrence property qualify for the historical listing, said Sarah Martin, the national register coordinator with the Kansas State Historical Society.

“It took three days for his carpenters to create this roof, which I guess was pretty fast,” Harper said.

The roof is a wooden structure, inspired by some of Dean’s students at KU.

“He certainly achieved his goal and was able to also live in a really special home that was really a work of art,” Harper said.

But what at the time was referred to as the home of the future did not represent a flourishing design.

“I think that (Dean) proved its feasibility. It just didn’t catch on,” said Martin, a Lawrence resident.

Among the home’s unique aspects are two external sump pumps stationed at two cornerstones to pump away water when it rains. The interior walls can be moved to reshape the layout.

After the house was built, Dean’s family lived there for a few years before moving in 1960, and the home has changed owners about half a dozen times.

Randy Masten, a major in the U.S. Army, said he and his wife bought the home without ever seeing the inside. They had lived in the neighborhood when they were both KU students, and when it went up for sale, they received interior photos from Harper, their friend.

“It’s unique in design yet comfortable to live in,” Masten said.

The Mastens hope to move back to live in the home in the fall when Randy begins teaching at Fort Leavenworth. The family enjoys the modern-style architecture, he said, and asked Harper to pursue putting it on the historic registry.

The Holter family has lived there this year while building a home near campus.

“It has a very happy feeling, the light and the charm that it has, for all persons living there,” Maria Holter said.

Residents often lose their privacy because people want to come see the house or wave to people inside the large windows, Holter said. It also has attracted unwelcome interest from other visitors, such as the time a few months ago that Holter and her husband, Mark, awoke to a loud sound, only to discover skateboarders doing some tricks on the roof.

The roof is fragile and was replaced in the mid-1980s. Now a rubber membrane rests on it and a thick painted-on plastic coats the roof. Essentially, the roof is not a skateboard ramp.

“It’s harmful to the house. So please don’t,” Harper said.

Neighbor Grace Foutz has lived two houses away with her husband since the early 1970s. She says the “neat” home makes the neighborhood unique and provides a good guidepost when giving directions.

And, after all, it is Lawrence.

“It’s just unusual,” Harper said. “And I guess here in Lawrence we can accept diversity, right?”