Washington ? Thousands of people marched against abortion here Monday. More than a few of them also marched for Sam Brownback.

Brownback, the conservative Kansas Republican senator, announced his bid for the 2008 Republican presidential nomination Saturday in his home state. Monday’s march was his first major public appearance since.

He was feeling the love.

Dozens of blue “Brownback for President” posters dotted the National Mall, where marchers gathered before proceeding to the Supreme Court. Well-wishers approached to urge him on. A gaggle of photographers recorded virtually his entire participation. (He was one of the few politicians to march the entire way; most others gave speeches beforehand and then split on this toe-numbingly cold, damp day.)

“God bless you, Sam! You are the next president, in the name of Jesus!” shouted a voice near the onstage microphone after Brownback’s speech.

A surprising response for an underfunded politician mired at 1 or 2 percent in national polls? Not in this crowd. To many marchers, Brownback isn’t an asterisk, he’s a hero. And that’s what gives Brownback hope that his grassroots-oriented campaign could take the establishment by surprise.

Brownback so far is the only Republican presidential hopeful who appeals strongly to the party’s social conservative wing, and his candidacy is a test of how influential that wing of the party remains.

Speaking to reporters at a Capitol Hill reception his campaign hosted (it had to rent an overflow room to handle the crowd), Brownback unleashed a volley of facts and figures: In Iowa, 70 percent of Republican caucus-goers describe themselves as “pro-life,” and 40 percent of them wouldn’t support a candidate who wasn’t opposed to abortion, Brownback said.

And what of Arizona Sen. John McCain and former Massachusetts Gov. Mitt Romney, two Republican front-runners? Neither was at the march. (The only other possible Republican presidential candidate who appeared was California Rep. Duncan Hunter, who’s an even longer shot than Brownback. Hunter vowed to make all potential judicial appointees watch a sonogram.) 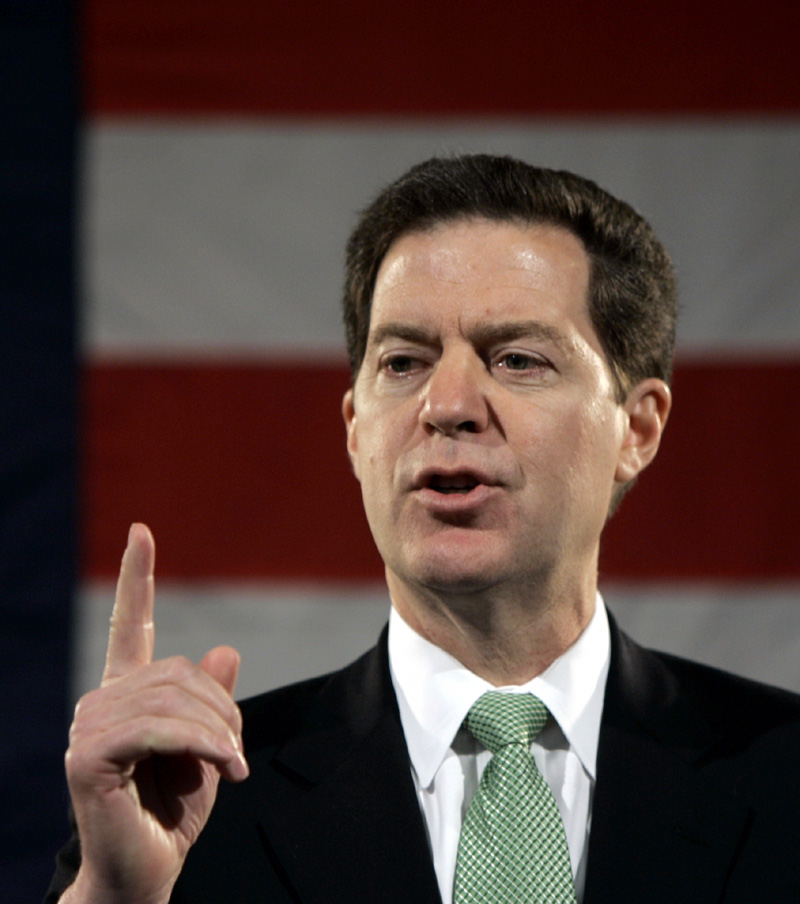 Sen. Sam Brownback, R-Kan., announces his intention to run for president Saturday in Topeka. On Monday, Brownback participated in an anti-abortion march in Washington, D.C., where marchers carried Brownback

McCain opposes abortion except in some circumstances, but he’s had difficulty persuading religious conservatives to support him. That remained true Monday. Some dismissed him as “not pro-life” or “unimpressive.” Whitty Whitesell of Plymouth, Mich., allowed that McCain was “a war hero and wonderful example” but said Brownback “stands for life.”

Romney took a beating from a flier that featured pictures of him and Democratic Massachusetts Sen. John Kerry. The brochure was titled “Pro-Life Students Against Flip-Floppers from Massachusetts” and highlighted Romney’s past support for Roe v. Wade. (Romney says he opposes abortion.) Cheryl Sinclair of Smithtown, N.Y., who said abortion was her No. 1 issue, called Romney “back and forth” before she even saw the flier.

Brownback wouldn’t trash McCain or Romney, but he did say, “I don’t think so, no,” when he was asked whether any other Republican candidate could match his record on fighting abortion.

Still, even some in the crowd holding Brownback signs didn’t know much about the man from Kansas.

“All I know is he’s pro-life and they were passing out signs,” said 17-year-old Laura Marshall of Livonia, Mich.

But at this point, Brownback and his supporters are running more on faith than anything else.

“Pray for the campaign and we’ll get it done in 2008,” Brownback told the crowd at his reception.

Patricia Pitkus Bainbridge of Rockford, Ill., was among those listening. She’d never given a penny to a politician until Brownback came along. She has talked up Brownback to friends and is unperturbed by those who say he can’t win.