Giving totaled $1.3 million over the years

Kansas City, Mo. ? Larry Stewart, who was known for years as Secret Santa because of his habit of roaming the streets in December anonymously handing money to people he thought could use a lift, died Friday. He was 58.

Stewart gained international attention in November when, after 26 years of his anonymous streetside giving, which totaled about $1.3 million, he revealed himself as Secret Santa.

He was diagnosed in April with cancer and said he wanted to use his celebrity to inspire other people to take random kindness seriously.

“That’s what we’re here for,” Stewart said in a November interview, “to help other people out.”

Stewart, from the Kansas City suburb of Lee’s Summit, made his millions in cable television and long-distance telephone service.

His private holiday giving started in December 1979 when he was at a drive-in restaurant nursing his wounds from having been fired. It was the second year in a row he had been fired the week before Christmas.

“It was cold and this carhop didn’t have on a very big jacket, and I thought to myself, ‘I think I got it bad. She’s out there in this cold making nickels and dimes.”‘

He gave her $20 and told her to keep the change.

After that, Stewart hit the streets each December, handing out money, often $100 bills, sometimes two and three at a time. He also gave money to community causes in Kansas City and his hometown of Bruce, Miss. But Stewart said he offered the simple gifts of cash every year because it was something people didn’t have to “beg for, get in line for or apply for.”

Stewart gave out $100,000 between Chicago and Kansas City in December. Four Secret Santas whom Stewart “trained” gave out another $65,000.

Phillips said he met Stewart about 18 years ago when Stewart decided he needed some security to go with him on a “sleigh ride.” That, Phillips said, is what Stewart called his gift-giving journeys. 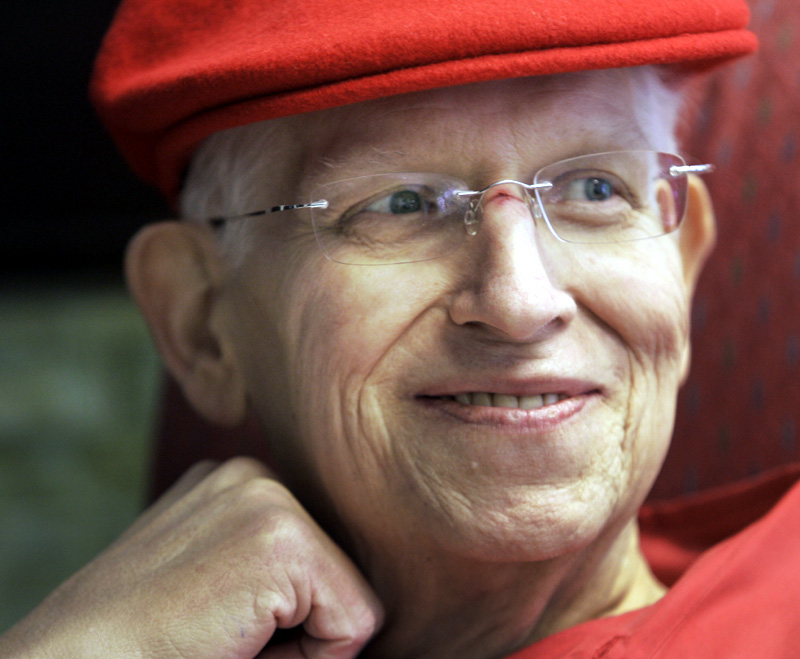 Larry Stewart speaks with a reporter during in interview in Kansas City, Mo., in this file photo from Nov. 17, 2006. Stewart, a Missouri millionaire who became known as Secret Santa for his habit of roaming the streets each December and anonymously handing money to people he thought could use the help, died Friday. He was 58.

Stewart sought the security because some people had chased him the year before after they saw him giving money away.

“I thought it was a joke and some of my friends were setting me up,” said Phillips, then a captain. “But I was available that day, so I went with him, and it was a life-changing experience for me.”

“I was literally in tears at the end of the day, watching him hand out money to so many people. It was just fantastic.”

Phillips was enthusiastic when Stewart invited him to join him the next year.

Over the years, the men become close friends. Phillips was designated as the first of the “elves,” a title given to people who help out and provide security.

Phillips said he has changed in little ways. Because of Stewart, Phillips said he tips more than he ever did before, giving waitresses a $20 for a small purchase and telling them to keep the change.

“They’ve expressed that they appreciate everyone’s prayers and thoughts,” he said. “Right now they don’t want to get involved in anything else.”

Funeral arrangements were pending. The family said the funeral will be private and for family and close friends.

Phillips said more details, including where mourners can send contributions, would be released Saturday.

“He was,” Phillips said of his friend, “a wonderful person.”