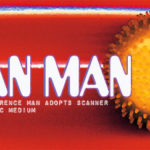 Bill Bowerman’s family has learned to spot that twinkle in his eye.

It’s the spark that flashes when he gets his hands on something that might look interesting in his artwork. When they see that light, they know they might as well say goodbye to Bowerman and whatever he’s holding.

Like the time his grandsons were visiting from The Netherlands and one of them brought a squishy yellow ball that looked like an inflated puffer fish.

“I started playing with it, and my daughter could see,” Bowerman recalls. “She said, ‘Go ahead and take it.'”

Bowerman stole away with the toy to his studio, where he situated it on his flatbed scanner and covered it with a sheet of glossy red paper that he oscillated as the light bar traveled slowly past.

This time he knew what would happen – the scanner created an abstract field of red and white stripes punctuated with a glowing gold orb. But five years ago, when he first put something out-of-the-ordinary in the imaging device, he was caught off guard by the results.

It was a gingko leaf that he wanted to remember – he encountered it on a walk the day his second grandson was born.

“I took the lid off, put it on the scanner, and I was stunned at how beautiful it was,” Bowerman says. “It’s beautiful to start with, but the image of it from the scanner was in some ways more beautiful because the light of the scanner wrapped around the object and created three-dimensionality and a floating-in-space feeling.”

Bowerman had been drawing and painting for decades. He’d even taken a few classes in printmaking and ceramics. But his chance discovery of the artistic possibilities of the scanner sent him in a different direction.

“At the time, I felt like a pioneer in a new territory,” says Bowerman, 64, who refers to his work as scanography.

He started experimenting to test the scanner’s capabilities. His earliest images explore what happens when you scan nothing while moving the scanner lid up and down. That created patterns of light he’d never seen before. He also discovered that when the scanner looks up and sees nothing – and when he’s working in a dark room – it records black.

Then he experimented with dancing his fingers and other objects in front of the scanner as it moved, a process he calls action scanning.

Through trial and error, Bowerman has figured out what the scanner can do well and not so well. He spends hours essentially playing to create his work, which is currently on view in a solo exhibition called “Explorations in Scanography” at the Lawrence Arts Center, 940 N.H.

“I love the scanning technology because it’s risk-free and cost-free, takes very little time, and the results are quite amazing,” he says, noting that he uses an “ordinary scanner” that he’s had for years and a nothing-fancy computer, and does little or no editing or enhancement of the raw images.

Bowerman often encounters new objects to scan during walks through his tree-thick neighborhood in central Lawrence. He also gets help from his wife, Carolyn, who brings him things like fruits and vegetables that have rough surfaces or interesting shapes.

He sees possibilities everywhere, says friend and artist Judi Geer Kellas, who once taught Bowerman in a printmaking class at the arts center. She recounts how the two were having tea one afternoon, and Kellas put a bit of sweetener in Bowerman’s cup. It sat on top of the liquid and slowly dissolved and spread out.

Indeed, Bowerman thinks a lot about his art. With his background in social psychology – the Seattle native has a doctoral degree in the subject from Harvard and taught it at Kansas University in the 1960s – he enjoys contemplating the relationships of objects in his work and how viewers perceive them.

“I have watched Bill’s work as an artist develop for over a decade – from his earlier small acrylic paintings to his discover of digital imaging – and I think one can see common characteristics throughout,” Mitchell says. “The paintings were iconic and suggested a kind of private visual language of symbols comprised of flat colors on neutral backgrounds. I always felt these might have been inspired by his work as a psychologist.

“Bill’s current use of discreet objects laid on a flatbed scanner to make scanographs seems related graphically, but the expansion into recognizable subject matter and the vibrant colors of light add new levels of meaning and splendor.”

Art has been an integral part of Bowerman’s life since childhood. His mother was an amateur artist who did watercolors and drawing. His grandmother did ceramics and drawing, and kept a kiln and a loom in her New Jersey home. When he visited, the family often trekked to New York to visit museums.

“I think if you’re sufficiently interested in things and adventurous and inventive, you get your education wherever you can,” says Bowerman, who has no formal art training.

Equal parts artist, scientist and inventor, he earns his living doing technical writing and illustration, statistical analysis and consulting on software design. He has 10 patents to his name, mostly in the field of technology.

So combining that interest with his artwork comes naturally.

“I’ve always been interested in technology and art,” he says. “To me, there’s no reason not to just flow back and forth.”

Kellas agrees and says she recognized something special in Bowerman years ago when he was her student.