Most advanced piano players don’t go to college to learn how to play gospel music. Then again, not all of them think like James Cockman.

Cockman, a doctoral student at Kansas University, can play the works of the classical masters. And he can play the old standby hymns that are standard at churches.

But his passion is combining the two.

“I want to preserve these hymns,” he says, “and I want to spice up the hymns in an interesting way.”

Cockman is gaining renown in the world of piano competitions with his hybrid arrangements that combine hymns with secular pieces.

For the competition, Cockman performed two original pieces he wrote.

The first combined the hymn “Abide With Me” with Frederick Chopin’s “Etude Op. 10 No. 9” and Franz Liszt’s “Concert Etude No. 3.” The second used the works of George Gershwin, Scott Joplin and Louis Moreau Gottschalk to embellish the hymn “He Set Me Free.”

“Independently, they’re fine, but they’re more accessible if you combine that hymn with something else,” Cockman says. “I love to do it. It takes a creative process to think, ‘I love this hymn. How can I make it more than it is?'” 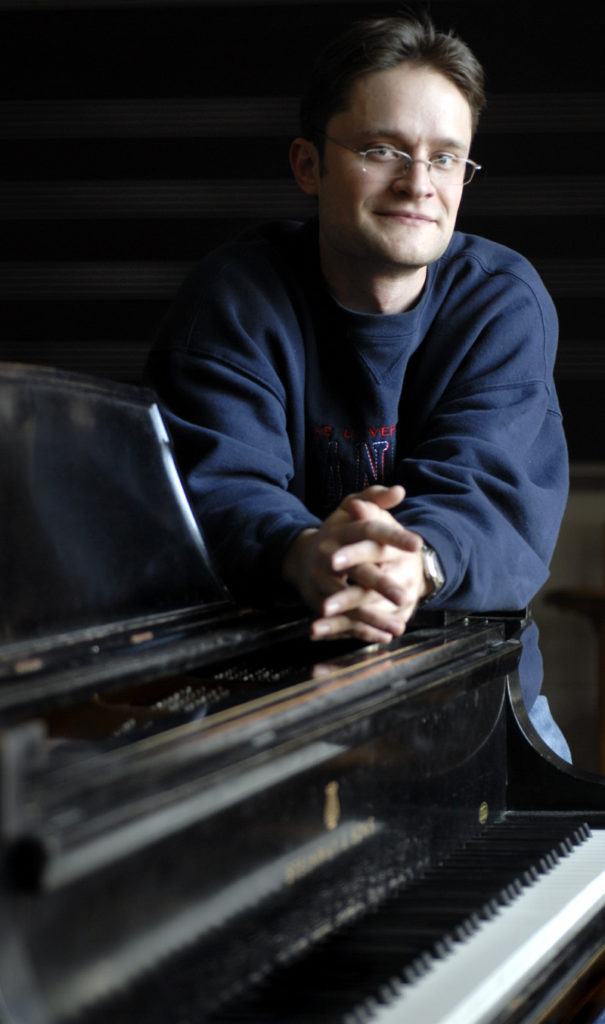 Cockman, 24, has been playing piano since the age of 3. He’s been pianist at his church, Trinity Bible Church in Pleasant Hill, Mo., since he was 10.

He received his undergraduate degree at William Jewell College, then got his master’s from Central Missouri State.

He continues to live in Pleasant Hill, commuting to KU for classes and to teach piano students.

The hymn/classical pieces he composes often end up becoming preludes or offertories at Sunday church services.

“I have to relate to them, relate harmonically, and (the secular music) has to showcase the hymn,” Cockman says. “I’m very careful about the pieces I use. I don’t want to draw the attention away too much from the hymn message and words. I wouldn’t throw in the theme from ‘Jurassic Park.'”

Members of the church look forward to Cockman’s playing each week.

“We can tell God has really blessed him with musical abilities,” says Susanne Garlett, who works in children’s ministries at the church. “It’s very enjoyable, because it isn’t just a prelude or something you’d hear in a traditional way of presenting a hymn. He oftentimes mixes in the works of the masters, and it fits beautifully. It’s more fun than just listening to the dry hymn.”

But at the same time, Cockman says he’s not playing the pieces to impress anyone.

“Church is not a show,” he says. “You can’t go there to show off. You’re there to worship as the body of Christ.”

Winerock says Cockman’s abilities go beyond the novelty of what he plays.

Cockman is scheduled to finish school in 2008. He might choose to pursue a university teaching career. He also wants to work in ministry, perhaps on the radio.

And he may try to publish the hybrid church music he’s written. So far, most of it is in his head.

“I grew up with these hymns, and I feel they still need to be cherished by both sacred and secular audiences,” Cockman says. “I’m re-introducing them to my audience.”