Topeka ? Gov. Kathleen Sebelius plans to pursue a broad energy policy during her second term, and her goals include encouraging more conservation and fostering the production and use of biofuels such as ethanol.

She said the state needs to work with merchants so that more of them are selling ethanol-blended fuel from their pumps, particularly the 85 percent blend known as E-85. She added that the state faces a “sea change” in regulating electric companies to push them to pursue “alternative” strategies for meeting consumers’ demand for power.

Sebelius said the Kansas Energy Council, which she created four years ago to advise her on such issues, is working on a statewide conservation plan. Shortly after she won a second term in November, she named Lt. Gov.-elect Mark Parkinson as the council’s co-chairman, signaling that the issue is important to her.

“It’s going to be a multipart strategy that really looks out 25, 50 years from now and says, ‘Here is an opportunity to kind of make a shift,”‘ Sebelius said. “I think we are at – both as a country and as a state – a pivotal point, where we need to make some long-term decisions about where we want to be.”

Sebelius wasn’t specific about her plans, saying her proposals still are being developed. She also said many of the initiatives she will pursue will be administrative actions that don’t require legislative approval.

And, she said, she will join other governors in urging Congress to adopt a national energy policy and use the writing of a new farm bill to boost the production and sale of biofuels. 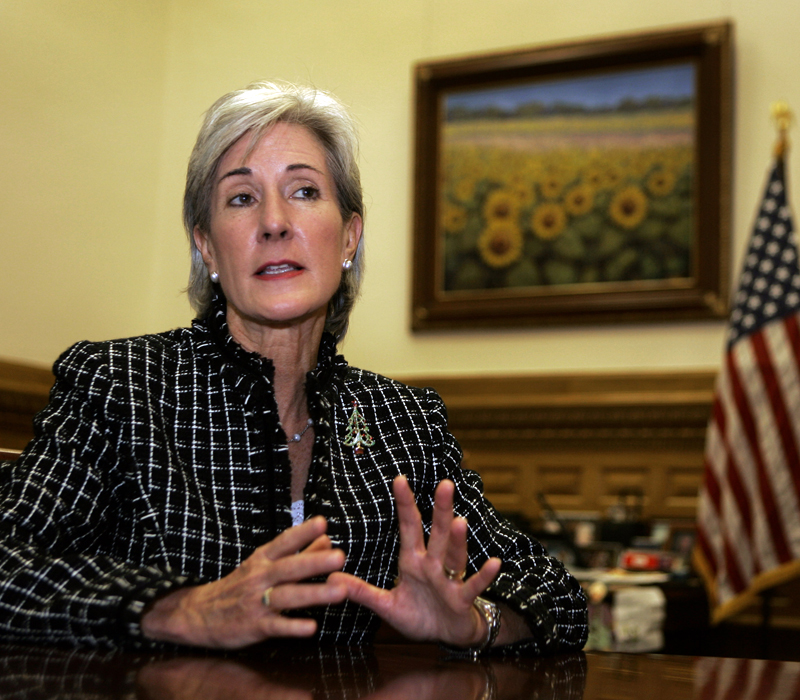 Kansas Gov. Kathleen Sebelius discusses plans for her next term during a recent interview at the Statehouse in Topeka. The governor plans to pursue a broad energy policy during her second term, and her goals include encouraging more conservation and fostering the production and use of biofuels such as ethanol.

“This is another area where what’s happening or not happening at the federal level has a direct impact,” she said.

The 2007 session begins amid a public debate – and criticism from environmentalists – about several utilities’ plans to build coal-fired plants to generate electricity. The largest is from Hays-based Sunflower Electric Power Corp., which is seeking a state air-quality permit for three coal-fired plants in Finney County.

In 2005, legislators created the Kansas Electric Transmission Authority to develop and upgrade electric transmission lines. It can propose projects financed by bonds that are paid off through rates charged to consumers.

Some officials have worried about Kansas’ electric supply since the largest blackout in U.S. history, in August 2003. It cut power to parts of the Northeast, Midwest and Canada, affecting 50 million people. Kansas wasn’t directly affected, though it is on the western edge of the massive Eastern power grid.

Neufeld said plans for increasing the use of wind to generate electricity won’t come to fruition unless the state has the transmission lines to move the power.

Sebelius said Kansans – and their regulators – need to consider that they have become used to cheap energy, which has discouraged conservation. Coal-fired plants typically are seen as the least costly way to generate electricity.

Sebelius said Kansas finds itself in a position to benefit from the growing demand for ethanol and other biofuels.