This is the month to jump on the health bandwagon.

“Our busiest months are January and February,” Body Boutique marketing director and fitness instructor Tracey English said of the hot season for new memberships. Customers “just know that they want to make a change, they want to make a positive change, and it draws them in here.”

Lawrence health and fitness clubs have received and expect new faces in the doors as many attempt to make their New Year’s resolutions come true. Regular exercisers also get moving to get in shape in time for the spring and summer seasons.

Alicia Cook of Lecompton took her first steps to a new body Tuesday, meeting with a fitness professional at Body Boutique, 2330 Yale Road.

It takes a commitment. 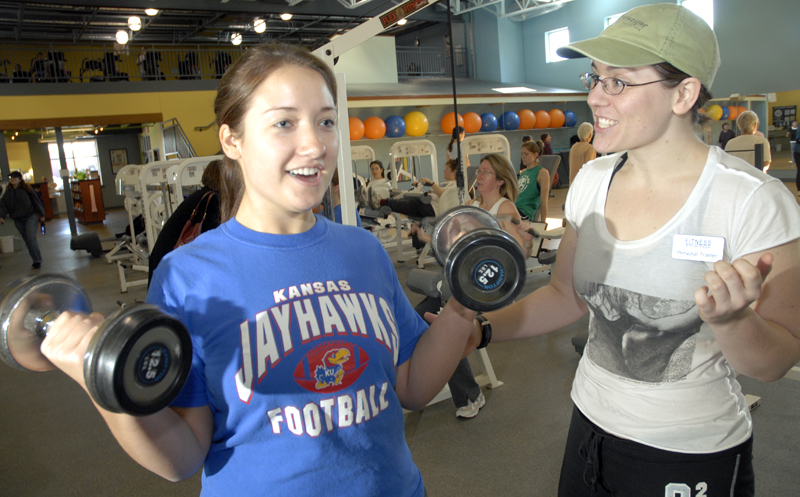 “I think the majority of the people that are going to get in shape understand that they have to do it year-round – it’s not just something that you do for a couple months and quit,” said Rick Sells, owner of Lawrence Athletic Club. “We just don’t see as many people starting and stopping as we used to.”

Sells said the club in January 2006 recorded more than 400 transactions. The majority, nearly 370, were membership renewals, but the club did see 42 new memberships, he said, adding that January, February and March are peak months for new memberships.

Some who already work out regularly are using the New Year’s occasion to set fitness challenges.

Sarah Dinsdale said her goal is to keep up with a workout program that’s been under way since October. It’s one resolution on a list that includes meeting new people, starting new friendships and learning new skills at work.

Dinsdale said she tries not to have strict New Year’s resolutions, such as “lose 10 pounds.” That can be setting yourself up for fitness failure, she said.

“I find it to be a lot more enjoyable if I just do it to relieve stress and things like that, if I don’t have a certain goal,” she said.

Is New Year’s really a good time to jump on the health bandwagon?

“I think it’s good if you want to do it,” said Don “Red Dog” Gardner, who leads the Dog Days community workout program. “Don’t do it if you don’t want to.”