A way with words 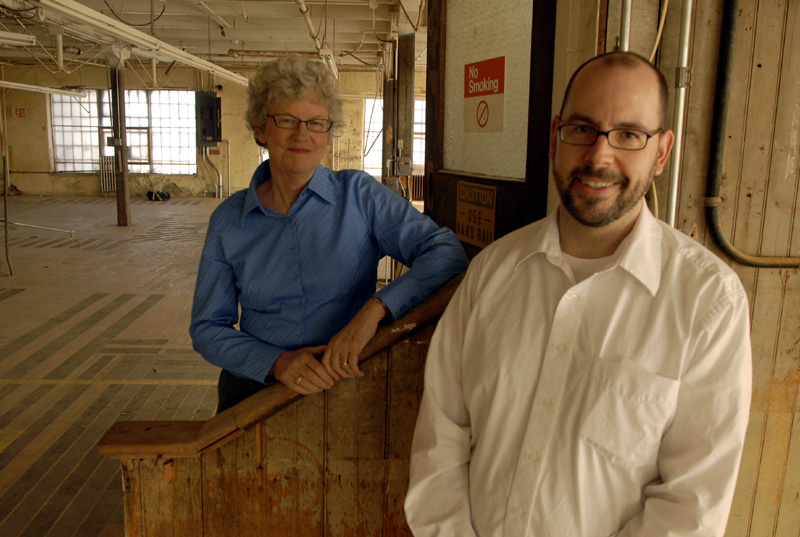 Jean Grant, left, and Doug Crawford-Parker are the winners of this year's Langston Hughes Creative Writing Awards in fiction and poetry, respectively. The two will be honored today, on Langston Hughes' birthday, during a 7 p.m. ceremony at the Lawrence Arts Center, 940 N.H.

Each year the Lawrence Arts Center and The Raven Bookstore sponsor the Langston Hughes Creative Writing Awards to recognize excellence and encourage achievement of emerging writers in Douglas County. This year’s awards went to Jean Grant, fiction, and Doug Crawford-Parker, poetry. Each will receive $500 and will read during a reception at 7 p.m. today – Langston Hughes’ birthday – at the arts center, 940 N.H.

Jean Grant writes while she swims.

Unlike her husband, who surges through the lanes at Carl Knox Natatorium, Grant keeps a leisurely pace, letting the liquid cradle her as her mind wanders.

“I think about the plot, and I think about my characters,” says Grant, winner of this year’s Langston Hughes Creative Writing Award in fiction. “Invariably, I’ll think of a little something. It’s the silence and the water. There’s something about that relaxation.”

Although she started a version of her first novel, “Burnt Veils,” about 20 years ago, Grant has refined the story at the local pool. But it took a journey far beyond Lawrence to dream up the tale.

Born in Montreal, Grant studied in France and lived in Indiana with her husband before moving to Cairo in 1965. The following year, the pair moved to Beirut and loved it so much they stayed a decade – until the escalating civil war threatened to claim their 7-year-old son, who loved to collect bullets from an area crawling with snipers.

They relocated in 1977 to Saudi Arabia, where Grant taught and worked six years as a reporter for Arab News.

“I loved being a journalist,” says Grant, now 64. “I just think it’s the best job on earth. I interviewed camel drivers and U.S. senators and Saudi businessmen – and then all the women because, of course, the Saudi men couldn’t interview the Saudi women.”

That gender separation and other customs of the Muslim world play a central role in “Burnt Veils.” Emergency room doctor Sarah Moss travels to Saudi Arabia to decide whether she can cope well enough with cultural differences to marry Ibrahim, a hydrologist she met in the United States.

The two wed shortly before 9/11, despite objections from Ibrahim’s family. Trouble thickens when the U.S. invades Afghanistan, and it climaxes with a fire at the school where Layla, another character, teaches. The tragic scene, Grant explains, is based on an actual 2002 blaze at a Mecca girls’ school that killed 15 students.

“The girls fled from the school,” Grant says, “and it’s been pretty well-documented that the religious police wouldn’t let them out, pushed them back in, because they weren’t properly covered.”

Grant continues to seek a publisher for the novel, which she hopes stimulates readers to ask themselves how big the world can be.

“Does it have to be just our families, our neighborhoods, the places where we’ve grown up?” she says. “Or can we really expand to take in totally different lifestyles? Can we thrive in a place that’s really quite alien? I’d like to think it’s true.”

Lawrence poet Denise Low, who served on the committee that selected the Langston Hughes winners, characterized Grant’s work as a good read.

“I think she really has crisp writing,” Low says. “It engages the reader because of the action and the drama. And the situation of colliding cultural backgrounds is really relevant.

In the meantime, back at the natatorium, Grant keeps swimming and writing. Her next book – about a mother with a bullet-collecting son who lives in Beirut during the civil war – might be a novel, might be straight memoir.

She says she’s honored, if not a bit embarrassed, to be receiving the Langston Hughes award.

“It’s supposed to be for emerging writers,” she says. “Can you still emerge at age 64?”

There’s a dirty rumor about poetry that Doug Crawford-Parker would like to dispel.

“There’s the perception that poetry is only for really smart or really educated people, and there’s some secret you’re supposed to get,” says Crawford-Parker, winner of this year’s Langston Hughes Creative Writing Award in poetry. “I just wish people would not worry about that, just read a poem and understand what they understand and enjoy what they enjoy.

“It’s like wine. You can spend all sorts of time learning stuff, or you can figure out a couple kinds of wines you like and drink them.”

Crawford-Parker’s latest tastes are all over the map. He enjoys Edwin Arlington Robinson, Robert Frost, Emily Dickinson, Robert Pinsky and Donald Hall, the current poet laureate of the United States. He can’t name a favorite and figures he has something to learn about writing from every poem he reads.

“I can’t just write; the reading goes along with it,” says Crawford-Parker, an English instructor at Kansas University. “Ted Kooser, now the former poet laureate, when he was here somebody asked him about that connection, and he said he tells his graduate students for every one poem they write, they should read 100.”

That seems to be when Crawford-Parker, 41, does his best work. He says lines of verse often occur to him while he’s grading papers his students have written about other poems.

He doesn’t have a strict writing routine. He used to get up early to work, but that became less attractive when a toddler made sleep hard to come by. So he writes when he can, sometimes at coffee shops. And he always composes his first drafts by hand.

Becoming a poet wasn’t exactly Crawford-Parker’s plan. The Latrobe, Pa., native majored in history at Cornell University. But during a survey course in creative writing, he got an assignment to write some poems.

“In ways that I did not anticipate, that really drew me in,” he recalls.

He enrolled in a poetry writing class and later got a Master of Fine Arts in the subject at Wichita State University. Over time, Crawford-Parker has developed a style that’s not really a style – an exploratory approach to writing that yields a variety of results. Some poems are historical. Some are about brief experiences. Some are about perception.

What ties them all together is an appreciation of language and an attempt to use it to compound meaning.

“For me, poems are not just messages,” Crawford-Parker says. “They’re ways to use the language to do new, interesting things. In that way, it’s like music. You don’t listen to a song just to know the message. You feel it; and you feel a poem.”

Lawrence poet Denise Low, who sat on the selection committee that chose Crawford-Parker for the Langston Hughes award, says she’s been impressed with his serious approach to writing since she was in an informal writing group with him about 10 years ago.

“He reflects on things very carefully and considers them, and that level of depth and multidimensionality comes out in the work,” she says. “I really loved his use of etymology and looking deeper into how language makes us human.”

Since Crawford-Parker finished his dissertation in May – he has a doctorate and a master’s degree in English from KU – he’s been taking time to sift through his poetry and send his best work to journals.

“If you try to plot everything out in a systematic way ahead of time, it ends up being so mechanical,” Crawford-Parker says. “For me, it’s not very interesting to write that kind of stuff, and I think, as a result, it doesn’t tend to be very interesting to read.”