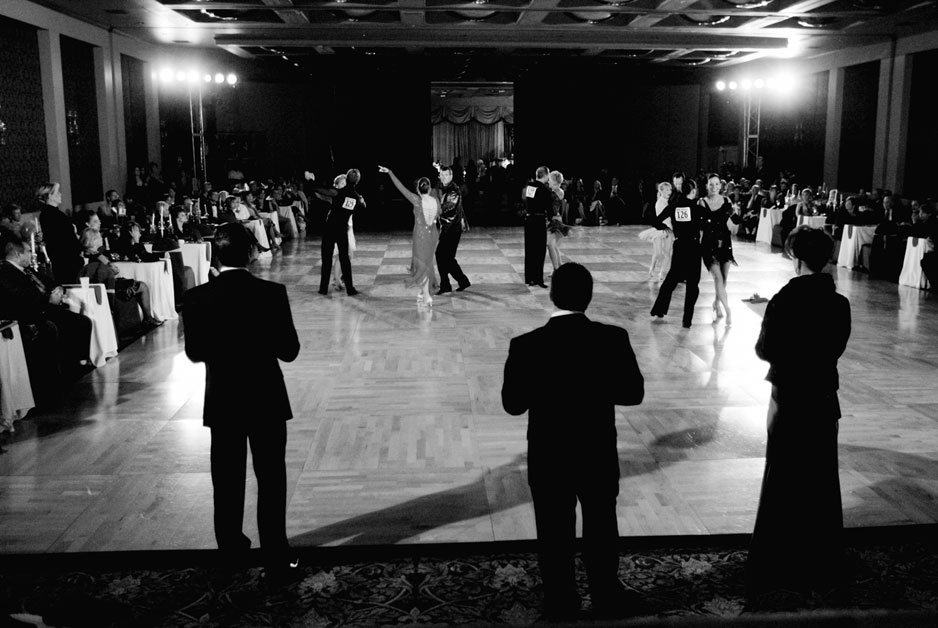 Dancers perform as judges mark their scores during the Grand National Dance Competition, which was last month in Miami Beach, Fla. Ballroom dancing is now known as DanceSport and could become the next big Olympic sport. 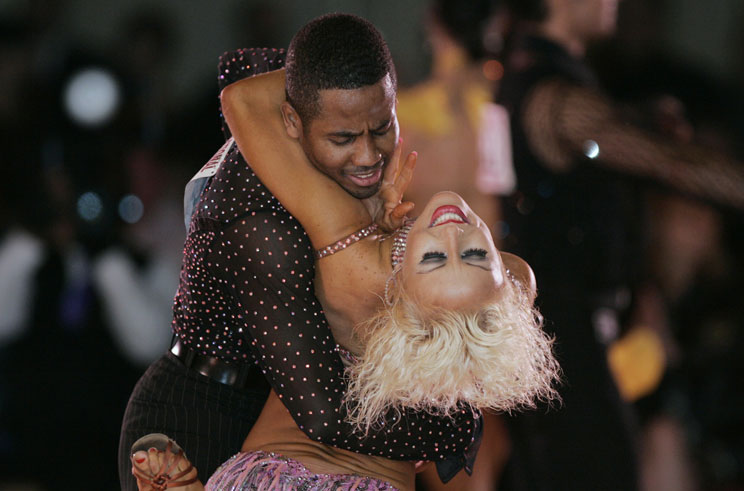 Miami ? Both Evgeny Dyachenko and Inna Ivanenko spend hours in the gym lifting weights. Five, six days a week they practice at the ballet bar to keep their legs and backs strong, squeezing in yoga or pilates classes to help with their stretching.

Their schedule may sound like the strict regimen of a tennis champion or even an NFL player, but Dyachenko, 25, and Ivanenko, 34, a married couple originally from Russia, are training for what could be the next big Olympic sport: ballroom dancing.

“People think that you can learn how to be, like, beautiful in one week, which is not realistic,” said Ivanenko, who rehearses routines for at least six hours a day. “It takes years and years and years.”

The timing has never been better for ballroom dancing, which has only recently caught Americans’ fancy.

“Dancing with the Stars” was ranked in the top-five shows of 2007 for both its two weekly broadcasts, according to Nielsen Media Research ratings. Even the show’s accomplished athletes visibly struggle with the difficult routines, and it’s no easier for competitive dancers.

“If you look at the young people today competing, right now they can’t drink. They can’t smoke,” said Didio Barrera, the features editor for Dance Beat, a magazine for ballroom dancing. “They cannot go to bed late, or you will have a bad performance. It’s to that level where you cannot afford to have a rough night or just go to the club.”

But is it a sport?

The World Sports Federation thinks so. So does the International Olympic Committee. In fact, it was because of the IOC that ballroom dancing is now known as DanceSport.

“Anybody who has done it knows it’s a sport because it’s hard,” said James Fraser, International DanceSport Federation Presidium member. The point of the name change, he said, was “to direct the whole consciousness of what we’re doing to a sport, rather than an art.”

There’s no doubt it can be physically taxing. The muscle exertion and breathing rates of competitors in a two-minute ballroom dance were equal to those of cyclists, swimmers and an Olympic 800 meter runner over the same period of time, according to a 1986 study at the University of Freiburg, Germany.

In 2002, DanceSport submitted a request to be considered for admission to the Olympics. The IOC considers several factors in adding a sport, including the sport’s history and tradition, popularity and cost. DanceSport will not be included in the 2012 Olympic Games, but it could be added in 2016.

In its report last summer on future Olympic Games, the IOC asked DanceSport to increase its spectatorship and TV viewership, both of which the dancing community has been doing steadily.

“Without television you are just not going to be successful in the Olympic games, but we are just about the most viewed sport on TV right now,” Fraser said.

Another point in their favor is gender parity. DanceSport is one of a few sports in which men and women compete against each other in the same playing field, which is a big deal for the IOC, said Peter Pover, President of USA Dance.

All in all, the dancing community is optimistic.

As Barrera puts it: “We are competing against each other. So it’s not like we do it just as an exhibition. We actually can compare whether your cha cha is better than my cha cha.”