Kansas University football quarterback Todd Reesing likely will have a few people from his home state of Texas in attendance at the Jan. 3 Orange Bowl in Miami.

But one group of Texans will be the center of attention while the Jayhawks and Virginia Tech aren’t on the field.

ZZ Top, the “little ol’ band from Texas,” is slated to headline the halftime festivities at the Orange Bowl. To his dismay, KU’s quarterback won’t get to enjoy the salty sounds of his Texas brethren.

“I’ve been known to listen to some ‘Top,'” Reesing said. “But I’m not going to be out there to listen to them. I’ll be in the locker room. That’s too bad, because that would be an awesome thing to top off a great trip.”

Instead, Reesing and his teammates will be busy dealing with the Hokies on that particular night. But leading up to the game, the quarterback will have time to savor the Miami experience as well as everything leading up to it.

“It’s been awesome so far,” Reesing said. “It’s been great walking around town and having people say, ‘Hey we got our tickets, and we’re going to Miami.’ And to see people making plans to go down there and see us in Miami and try to find hotels is great. It’s awesome to see that kind of support for the football team.”

The Jayhawks will get a week in South Florida and have every opportunity to soak up the sun and smell the Atlantic Ocean. But those times will be mixed with business, of course, and maintaining the balance is something Reesing feels the Jayhawks are prepared for.

“With coach (Mark) Mangino, I doubt there’s going to be a whole lot of room for us to get out-of-hand,” Reesing said. “At the same time, it’s going to be a great experience, and he’s going to want us to have fun and take in everything that we’ve earned and the fun that comes with. But the bottom line is that we’re there to win the game, and we’re not going to just show up and lollygag around and lose the game.”

The schedule leading up to the trip indeed will be business as usual. But since the revealing of the BCS selections, there has been an issue that has had nothing to do with the task at hand.

Reesing has had to answer questions about the Jayhawks’ invitation to the Orange Bowl over other more “deserving” teams such as Missouri, KU’s rival. Reesing gave a nod to Missouri for its victory against the Jayhawks in Kansas City, Mo., but made no apologies for their bowl destination.

“A lot of people have doubted us all year,” Reesing said. “But we don’t listen to that or take it to heart. We’re a good team. We’ve won 11 games, and if that’s not good enough for some people, then forget them.”

While Reesing sounded sure about all things concerning the game and those leading up to it, he did have to pause when asked about whether he would grow his beard out to honor the Texas trio playing at halftime. 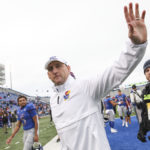 Beaty’s lawyers set to subpoena Gassnola for communications with KU