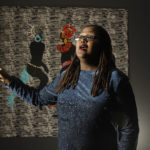 Marla Jackson, a local well-known quilter, is shown in front of one of her works displayed at the Spencer Museum of Art, 1301 Miss. The quilt depicts a young girl's path through life.

For more information on Marla Jackson’s upcoming nonprofit quilting organization, or to volunteer, e-mail her at marlaquilts@sbcglobal.net.

Ashley Toussaint is hunkered over a sewing machine with a slightly perplexed scowl on her face.

She’s trying to learn to applique from Marla Jackson, who has a quilt at the Smithsonian.

Toussaint, 13, misses her mark with the needle. She’s frustrated.

“My foot is heavy,” she says with a laugh.

It’s a Tuesday night at Ninth Street Baptist Church. The Youth Council of the Lawrence branch of the NAACP is working on a quilt depicting the novel “Native Son.” Scraps of fabric color the room – some discarded on the floor, others meticulously placed on tables in patterns – and there’s a huge bag in the corner for more to harvest.

The young, novice sewers might not know it, but they’re helping preserve a tradition of narrative quilting and oral history that goes back to colonial America.

Jackson, who is nationally known for her quilting even though she’s only done it for a decade, has a vision: What if children across the country picked up this dying art? They could learn fractions and geometry, market themselves, have their works hung in museums.

Heck, they could even be in charge of those museums someday.

“I didn’t know I had the ability to do this,” Jackson says of quilting. “It’s a gift. But it’s not a gift if I don’t share it.”

Jackson started quilting in 1997. At the time, she was working at Community Living Opportunities, a service organization for people with disabilities.

A mentally retarded woman with schizophrenia had paid $25 to take a quilting class downtown. Jackson, in turn, paid $25 to have the woman teach her to quilt.

Jackson liked it. After a few months of doing traditional quilting, she viewed an exhibit of narrative quilts at the Smithsonian Institute. Then, she was really hooked.

Eventually, people started to take notice. The Watkins Community Museum of History exhibited some of her works. Later, they were being shown at places like the National Civil Rights Museum in Memphis, Tenn. One of her works was selected for the collection at the Anacostia Community Museum, part of the Smithsonian.

Many of her works focus on historical themes. One recent project – which took nine months to complete – was a quilt highlighting the life of John Copeland, a former slave who was hanged along with John Brown at Harpers Ferry, W.Va. It will be part of the 150th anniversary commemoration of the Harpers Ferry raid in 2009.

She also had a quilt hanging at the Spencer Museum of Art as part of the Aaron Douglas exhibit.

“I think she is quite well-known nationally,” says Susan Earle, curator of European and American art at the Spencer. “I think Marla is really at the forefront of this kind of work right now. It’s a really important art form, and what I think is happening now is it’s moving into this realm of what people are calling visual literacy.”

As a child, growing up in Detroit, Jackson had trouble learning. She just couldn’t comprehend what her teachers were talking about.

The troubles even got her kicked out of sewing class.

But many years later, she realized she just wasn’t an aural learner – she was a visual learner.

“You may not be able to write, but you can have other ways of expressing yourself,” she says. “If you can quilt or draw, why can’t that be accepted?”

And that’s why Jackson is in the middle of her biggest project yet.

Her main objective is to let young quilters know their interpretation of history, and the world around them, is truly unique.

“It’s the freedom to know whatever you do is beautiful,” Jackson says. “Nobody else has your story. Nobody else can tell that story.”

Jackson is having papers drawn up to secure nonprofit status for her new organization.

But she couldn’t wait to start. That’s why she’s volunteering her time with the NAACP youths.

“I was so afraid I would miss a talented kid,” she says.

Rita Cosby, who helps to organize the Youth Council, says watching the children interpret Richard Wright’s novel “Native Son” has been impressive. The end quilt will portray multiple scenes and characters of the book as seen by the members of the group.

“Once they get involved in the reading and they focus on one particular event or character, what amazing ideas they have,” Cosby says.

And she says having a quilter such as Jackson involved makes it even more meaningful.

“I have always admired her work,” Cosby says. “It’s just been amazing, the concepts she has put into the quilts and how far she has gone – as far as the Smithsonian, and having her works published in books.”

Toussaint, who is an eighth-grader at West Junior High School, says she didn’t know much about sewing – much less narrative quilting – before Jackson started working with her group in August. Toussaint says now, she thinks about days in the past when sewing was more important.

“Back then, you had to,” she says. “If you had a hole in your pants, you’d just sew them up. But this is a new experience for us.”

Candelle Wilson, also an eighth-grader at WJHS, says Jackson is a good teacher because she understands her craft.

“It’s easy for her to tell us stuff,” Wilson says. “She knows what she’s doing.”

Over time, on this Tuesday evening, the conversation weaves in and out of daily life and deep issues.

A student asks Jackson how she chose the skin color for a quilt she did about author Langston Hughes’ life. She explains that Hughes’ skin was difficult to define, and that most people have various colors in their skin.

Later, the conversation turns to a scene from “Native Son.” In the novel, Bigger Thomas and his friends decided to rob a store owned by a Jewish man – not the typical black-owned stores they usually rob.

This is the type of conversation Jackson wants to spark with her quilts – and with her new organization.

A student asks Jackson about how a particular fabric character looks for the upcoming quilt. She says it looks fine.

“There are no wrong answers here,” she says.