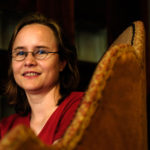 Lawrence author Lane Robins will sign copies of her first novel, a fantasy called Maledicte, on Friday at Borders.

When people ask Lane Robins what her new book is about, her answer depends on her mood.

If she’s feeling frisky, she says, “Oh, it’s a novel about cross-dressing, vengeance, magic and mad men in love.

“That’s actually how a friend of mine summed it up a few months back when I was trying to market it,” Robins says.

If they want a longer answer, she’ll indulge them by revealing a more complex story about a girl who vows to do anything to get her lover back, including posing as a man and making a deal with Ani, the devil of the world Robins spins in “Maledicte” (Del Rey, $14.95).

The Lawrence author will give a reading and sign copies of her debut novel during an appearance at 7 p.m. Friday at Borders, 700 N.H.

Robins has been on a collision course with fantasy writing since a friend gave her a “Dragonriders of Pern” book in seventh grade.

“That sort of changed the way my brain worked,” says Robins, 34.

However, she had to suppress her passion for the genre while working on a creative writing degree at Beloit College in Wisconsin, where fantasy wasn’t respected among academics.

“There is always a little bit of bias,” she says. “I think people think it’s easy, that fantasy is somehow just adventure stories for kids that never grew up. I don’t think that’s true actually. I think there’s amazing writing going on in fantasy.”

Robins anchored “Maledicte” in a bit of reality, basing the book’s unnamed world on England’s Regency period – the era after the Napoleonic Wars – when Jane Austen published her books.

“It’s just heading into the industrial age, so it’s not the classic high fantasy where it’s lords and ladies riding on giant horses with swords and shields,” Robins says. “This is the time period where people were carrying guns and gun powder and starting to mechanize – a good place to set gods and magic.”

The story follows 15-year-old Miranda, who transforms herself from a street urchin in the city of Murne to an attractive male courtier hell-bent on tracking down her lover, Janus. The earl of Last has plucked Janus from the slums after deciding he needs an heir. Possessed by Ani, the goddess of love and vengeance, Miranda becomes Maledicte and vows to reclaim what is hers.

“She finds out that sometimes you get what you want, but not in the manner you expected it,” Robins says.

Although “Maledicte” marks Robins’ publishing premiere, it’s not her first novel. She’s been trying to break into the industry since 1999 – her work has appeared in a few genre magazines and an anthology – and she credits her eventual success to perseverance.

“I think if you have basic competence in writing and something to say, you have a fairly good chance at it,” says Robins, who moved to Lawrence in 1993 from Miami. “The joke in my family is that I will never play the lottery because I won it by doing the publishing.”

Robins comes from a family that values the arts – her mother, Catherine Hale Robins, is a Lawrence sculptor known for her bronzes. And her father, Richard Robins, taught her to read before she started kindergarten.

“I think like most kids who do that – where reading is just bread and butter, you do it all day long – eventually you run out of books,” Lane Robins says. “So you start writing your own stories.”

Robins, a Weaver’s Department Store employee, is writing a sequel to “Maledicte,” which sold as a two-book deal. When she’s not working, she reads voraciously. She’s been revisiting the “Harry Potter” series – whose hero might be her favorite fantasy character at the moment – and enjoying titles by fellow fantasists Sarah Monette and Ellen Kushner. She also reads outside the fantasy realm, expanding her boundaries to keep her work fresh.

She says it’s been interesting gathering reactions from friends who aren’t necessarily fantasy and science fiction readers, but have read “Maledicte” anyway because they know its author.

“I don’t think I’ve converted anyone to the fantasy world,” Robins says, “but I think some of them were surprised that they did enjoy it.”