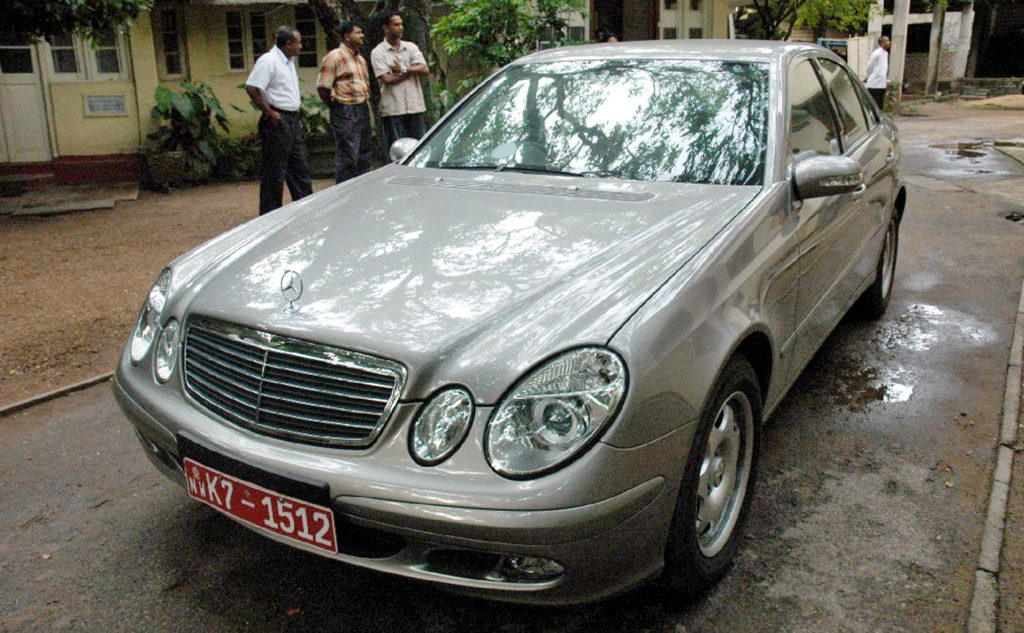 In this undated photo provided by the Office of the Leader of Opposition, a Mercedes Benz imported by monk-legislator Ellawala Medhananda is parked at the residence of opposition leader Ranil Wickremasinghe in Colombo, Sri Lanka. The tale of the Mercedes-Benz has sparked a national drama, the roots of the scandal lying in a special perk for Sri Lankan lawmakers.

Colombo, Sri Lanka ? The tale of the Buddhist monk and his shiny, new Mercedes-Benz has fueled a bizarre national drama that has angered Sri Lankans and tainted a group of revered religious leaders with corruption.

The monk – leader of a hawkish Buddhist party in the governing coalition – insists the scandal is a fiction created by political rivals to smear him with accusations he illegally sold the car at a huge profit.

Shrugging off the monk’s renunciation of material goods, his comrades have insisted the silver, E-class Mercedes remained his – even as his bitter political enemy was seen driving it around town.

“They (the monks’ party) came into politics promising to set new standards for the political mainstream, but see what they are doing today. This is unacceptable,” opposition lawmaker Gayantha Karunathilake said Monday.

The roots of the scandal lie in a special perk for lawmakers that allows them to import cars without paying the country’s massive duties, which often double or triple the cost of a vehicle.

The law bars them from selling the cars – often giant SUVs or stylish luxury sedans – for five years; Lawmakers routinely defy it, turning over the keys to wealthy businessmen for a hefty fee.

But allegations that devout monk-legislator Ellawala Medhananda made tens of thousands of dollars by selling his new car was too much for many Sri Lankans, especially when much of the country is struggling to eke out a living amid a bitter civil war.

Medhananda’s party, the monk-led Jathika Hela Urumaya, or National Heritage Party, fought back against the accusations, which have dominated the news here for more than a month.

“We have not sold or transferred the ownership of vehicles. This is merely a well-planned political campaign to discredit our party and weaken the government, which has shown military success against terrorism,” party spokesman Udaya Gammampila said.

The monks’ party, which calls for the government to crush the mainly Hindu Tamil separatists and opposes proposals to share power with the ethnic Tamil minority, has only eight seats in the 225-member parliament. But it wields great influence among the 70 percent of Sri Lankans who are ethnic Sinhalese, most of them Buddhist.

The conflict, one of Asia’s longest running, has left some 70,000 dead since 1983 and displaced hundreds of thousands.

The car controversy, which has been simmering for months, exploded into a near farce recently when opposition leader Ranil Wickremesinghe – an intense rival of Medhananda’s – turned up for a meeting with another prominent monk at a Buddhist temple driving the Mercedes.

Wickremesinghe said the businessman who reportedly bought the car, Hemantha Nishantha, was his supporter and lent it to him.

Through intermediaries, Nishantha, the businessman, declined requests for comment.

In an interview in The Sunday Leader newspaper, he said he paid $116,000 to an intermediary for the car and had received an offer from the monk’s party to buy it back for less than half that amount.

Many Sri Lankans said the involvement of a monk in what would otherwise be a routine corruption scandal made it difficult to digest.

Manoj Dissanayake, a local businessman, said it underscored that monks should stay away from politics.

“For centuries, the role of Buddhist monks was to advise rulers and not to become rulers,” he said.

The Morning Leader newspaper said Medhananda should be held to a higher ethical standard than other politicians.

“It could be argued that transfer of such (vehicle) permits by (members of Parliament) to outsiders for millions of rupees is an open secret,” it said in an editorial last month. “But should MP monks, said to be the epitome of morality and virtue, engage in such shady practices?”