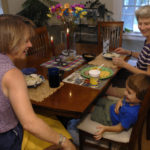 Partners Jill Kuhnheim, left, and Theresa Shireman joke with their 2-year-old son, Julian, during dinner Tuesday night in their Lawrence home. Kuhnheim and Shireman, who have been in a 12-year relationship, say they plan to fill out an application for the city's domestic partnership registry program that begins today.

People can apply for the domestic partnership registry only online. The application form can be found at www.lawrenceks.org. There is a $75 fee that must be paid at the time of registration.

Among some of the requirements that must be met are:

Lori Messinger already feels like she is part of a true partnership.

Yes, it is with another woman, which in this state means it won’t be called a marriage. But don’t tell Messinger it is not a partnership. Not after her companion of 15 years, Boo Tyson, stood by her as Messinger’s father was dying. Not after Tyson moved not once, but twice, so Messinger could build her career as a social welfare professor. And not after they balance the checkbook each month. It sure feels like a partnership when they watch both of their salaries go to pay for their jointly owned Lawrence home.

“You know, we fight about money and all the other things people deal with in regular life,” Messinger said. “We’re partners of the same sex, but in every other aspect of our lives, we live a very normal family life.”

Today, Messinger won’t have to just feel that she’s in a partnership. She’ll be able to show it, too. That will be courtesy of a new card and certificate that city leaders will be issuing as part of a domestic partnership registry program, which is the first in the state.

Gay and lesbian couples across the city said it will be a special day for them. The registry is open to both same-sex and heterosexual couples, but the registry particularly was pushed by homosexual couples because the Kansas constitution prohibits gay marriage.

“We want that piece of paper that says we’re being recognized, at least by the city of Lawrence,” said John P. Connolly, who is in a partnership with Steve Maceli. “It is just recognition. That is what we want. We’re a legitimate couple; we’re a committed couple.”

The registry doesn’t grant members of a domestic partnership the legal benefits that come with marriage. But supporters of the registry have said it will make it easier for employers to add domestic partners of their employees to the company’s health care plan. Supporters said several Fortune 500 companies offer such coverage but require documentation of the partnership from a governmental entity.

Many couples on Tuesday, however, said the insurance issue was not why they were going to sign up for the registry. Several were employees of Kansas University, which does not offer domestic partner benefits, and nothing in the city ordinance requires companies or organizations to extend health benefits to domestic partners.

For those people, joining the registry is about much more than health benefits. It is about social change.

“There are a lot of (gay) people afraid of what society’s response will be to them,” said Kelly Barth, who has been in a 10-year partnership with Lisa Grossman. “I want people to begin to see and acknowledge people who are different than them and make that shift in their own mind.”

Messinger said she hopes the registry will provide a symbol of normalcy to same-sex partnerships.

“I think it would help younger people who are just realizing they are gay or lesbian to see that it is sort of normal. To see that there are a lot of gay and lesbian people out there and that we have good lives,” she said. “It allows us to be present in that way, and I think that is a good thing.”

Theresa Shireman said the registry more than anything else is a sign of what the city stands for.

“I think it is an important thing for Lawrence to do,” said Shireman, who is raising a son with her partner, Jill Kuhnheim. “We were at a position where we were thinking about moving into Kansas City. These kind of things make an important difference in our decision.

“It is really about the community saying we accept all different types of families here, and we value diversity.”