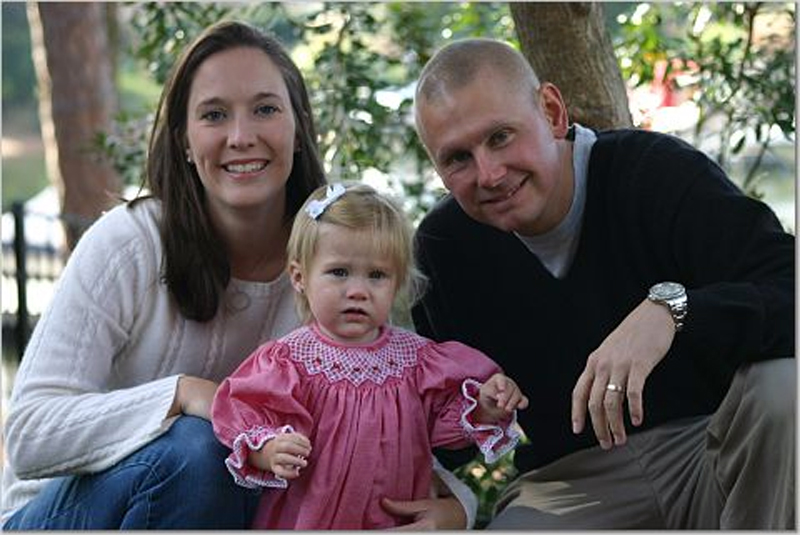 Christi, Addi and Bo Johnson are shown in this family portrait. Bo, a nonsmoker, was diagnosed with lung cancer. The couple is raising awareness, hoping a cure will be found.

Christi Johnson, a 1999 Kansas University graduate, could not take one more sleepless night. Early last year she made her husband, Bo, see a doctor after his persistent dry cough prevented her and their newborn daughter, Addi, from sleeping.

To support Addi’s Cure or to learn more about lung cancer and upcoming fundraisers, visit www.addiscure.org.You can also submit healthy recipes for the Addi’s Cure Cookbook. Check out Bo’s blog, http://bovsbac.blogspot.com, where the couple write every day to share their progress.

The healthy, active then-34-year-old was diagnosed with bronchitis, but the cough didn’t go away. Bo made another trip to the doctor in his hometown, Cornelius, N.C., where Christi moved in 2001.

That visit set into motion a whirlwind of events that left Christi, Bo and everyone who knew him, including Christi’s parents, Larry and Theresa Morgan, of Lawrence, in shock.

The lifelong nonsmoker was diagnosed with stage 4 lung cancer, the most advanced phase of the No. 1 cancer killer in the United States. Lung cancer is also the leading cause of death in Kansas, according to a 2006 KU Cancer Center report.

“At that time, the doctor told us he had four to six months to live,” Christi said. “I thought, ‘Oh my God, he’s not going to see his daughter turn 1.'”

Each day since the diagnosis in June, Bo fights for more time with his family. He started a campaign called Addi’s Cure, www.addiscure.org, to reveal how the number of “no-fault” lung cancer victims is rising and to raise money for lung cancer research, an area he and Christi have learned is drastically underfunded by the federal government.

According to Dr. Karen Kelly, deputy director of the KU Cancer Center and international expert on lung cancer, there isn’t as much funding for lung cancer as there is for breast cancer and prostate cancer because the disease is generally associated with smoking.

She said 13 percent of lung cancer patients in the United States are from the nonsmoking population. She said environmental factors and secondhand smoke account for 5 percent of that group, and genetics also may play a part.

Kelly said generally it’s symptoms, such as Bo’s cough, or patients who happen to need an X-ray anyway, that lead to a diagnosis already in its late stages. According to the American Lung Association, the expected five-year survival rate for patients with lung cancer is 15.5 percent compared with 64.8 percent for colon, 89 percent for breast and 99.9 percent for prostate cancer.

Since September, Addi’s Cure has raised $100,000 from people across the country, including Kansas, Bo said. Half of the funds will be used for lung cancer research, and the other half will be left in an interest-bearing account. He hopes to raise $1 million and use the interest to hold fundraising events. The Johnsons had a ticketed dinner in Charlotte, which raised $12,000, and a children’s event at Gymboree Play and Music.

Christi said she may coordinate a benefit run in Lawrence this summer through Don Gardner’s Red Dog Days, in which she was actively involved through high school and college.

Bo, who said he’s living each day to the fullest, is hopeful that if he can make it five years, doctors may have a cure for him. Christi’s parents are hopeful, too. Theresa said she knows he’ll fight the cancer tooth and nail.

Larry said on the surface Bo appears fine, but he recognizes the doubts of a father.

“I think our largest fear is what would happen to his wife and daughter,” he said. “I think that’s his largest fear right now, too, and I think we’re all hoping and praying he’ll be around longer than anyone expects.”