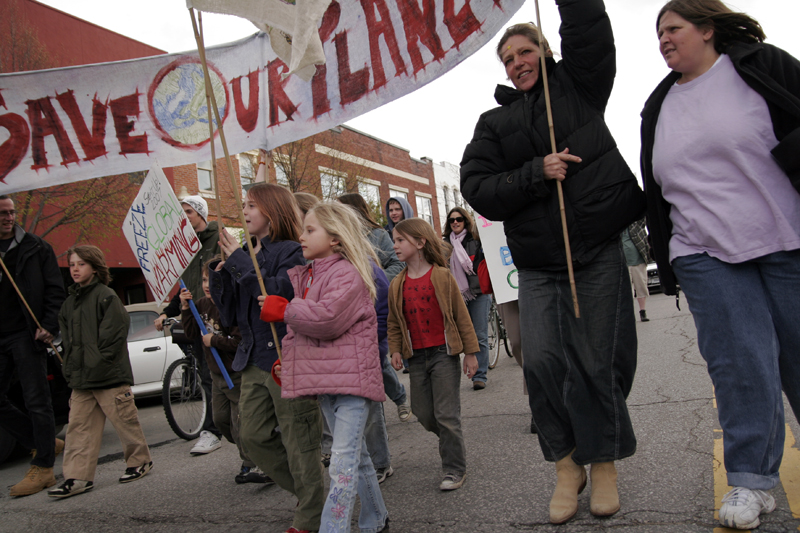 Concerned Kansans rally on Massachusetts Street in Saturday's Step It Up campaign. Lawrence's version of a nationwide event included a panel of speakers and the march to highlight climate issues. 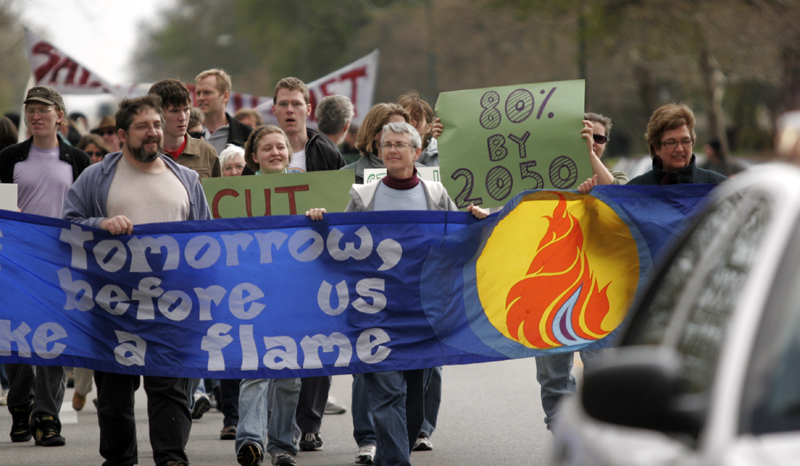 Concerned citizens from throughout Kansas gathered in Lawrence on Saturday to take part in the Step It Up campaign, which included a rally in South Park and a march down Massachusetts Street.

When it comes to picking its battles, the United States is fighting the wrong war, Don Worster believes.

Despite the Pentagon stating it has about $500 billion for its military budget, Worster, a Kansas University environmental history professor, suspects that the actual spending is closer to $800 billion.

“All this $800 billion to defend the safest and (most) secure nation in the world from human invaders,” he said, “yet there is no money to combat global climate change?”

Worster told an audience at the Burge Union on Saturday that climate change presented a greater threat to United States security and economy than terrorists in the Middle East.

“Nothing will bring the United States down as a world power faster than this,” he said.

Worster was among a panel of speakers at the Step It Up rally, Lawrence’s version of about 1,300 simultaneous rallies across the country on Saturday to put the issue of global warming in the limelight.

Climate change is an issue that Sierra Club member Bill Griffith, who came from Leavenworth to listen to the speakers, said has quickly gained attention in the past year since the release of a documentary by former Vice President Al Gore.

“It’s definitely gaining traction,” he said. “After ‘An Inconvenient Truth’ came out, we saw a marked increase in traction on this issue.”

The rally culminated in about 150 people marching on Massachusetts Street at 4 p.m. Saturday, a march that Francisco rode up to on a bicycle.

Speaking at Burge Union earlier in the day, Francisco said the Kansas Legislature has passed environmentally friendly legislation, such as a bill that would allow utility companies to enter into agreements with homeowners to help finance energy conservation measures on houses.

But, she said, progress in government on climate change issues marched at the pace of baby steps.

It’s the same with Lawrence City Hall, according to Maynard-Moody, who said the city hadn’t made fast progress on its agreement with the Sierra Club’s Cool Cities Program from a year ago.

It was an agreement in which the city was supposed to reduce carbon emissions by 7 percent by 2012.

She called on the audience at the Burge Union to pressure City Hall to make progress on the agreement.

“Give some time to this,” she said. “Because that is what it’s really going to take.”