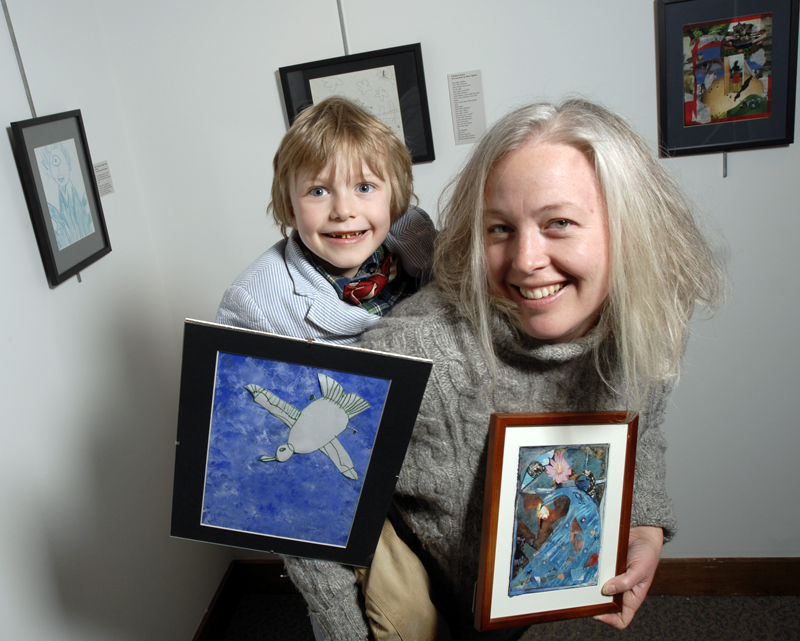 Sara Stalling and her son Maya Spitzer, 6, are part of an art exhibit at the Lawrence Public Library gallery that includes artwork they have done together and individually. Maya holds a piece that he and his mother worked on together called There 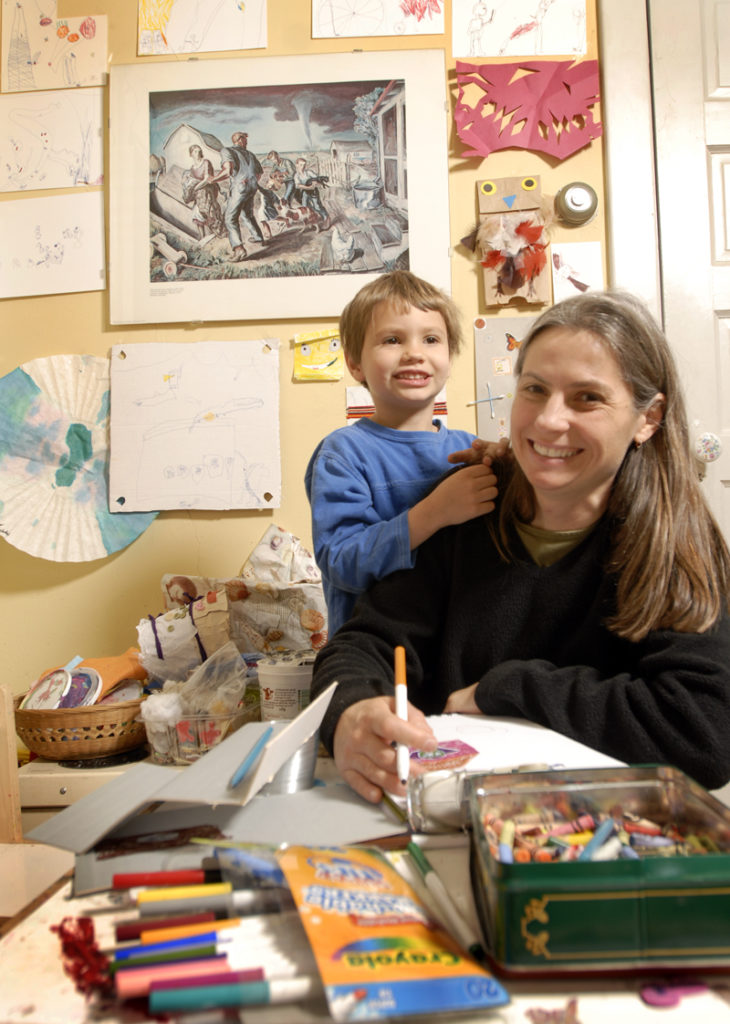 Lora Jost and her son Nicholai Jost-Epp, 5, also are part of the exhibit, which explores the connection between art and mothering. Jost and her son are pictured in a space that Nicholai uses to do his artwork.

Pablo Picasso said, “Every child is an artist. The problem is how to remain an artist once he grows up.”

Lora Jost has found a way to sidestep that problem – at least when it comes to the link between child and adult artists.

“When you have a kid and become a stay-at-home mother in part, your time making art dwindles,” Jost says. “I realized I was making art about my son, largely, and he was taking part in my processes.”

Hoping to further explore the connection between art and mothering, Jost and fellow Lawrence artist Sara Stalling have partnered for an unusual exhibit titled “Two Mothers, Two Sons.” The pair’s show – currently on display in the gallery at the Lawrence Public Library, 707 Vt. – includes work by their sons, Nicholai Jost-Epp (age 5) and Maya Spitzer (age 6).

“One thing I love about Nicholai is he responds to everything in the environment that strikes him,” Jost says. “It’s just how kids are with art: They are processing their life through image-making.”

The “Two Mothers, Two Sons” exhibit features clayboard, collage, digital collage, drawing, mixed-media and mosaic works. Some of the pieces are collaborations that involve a child’s drawing expanded through adult elucidation; others include a boy’s poem interpreted through a mother’s artistic eye.

“A lot of his work is connected to storytelling,” Stalling says of son Maya.

“A couple of his pieces, he and I did together. I took his drawing and cut them out. He arranged the page, and he told me what he wanted the background to look like. It’s kind of a collage and painting group effort.”

Jost and Stalling hooked up for the project somewhat by accident.

“I knew she had a son about his age. I called her up without even seeing her work,” Jost says. “I picked the perfect person without knowing her very well.”

The mothers collaborated very little about the specifics of the exhibit, preferring to let the work find a natural complicity.

“We just came together and found it was a good pairing,” says Stalling, who is working on her master’s thesis about using therapeutic art in the classroom. (She attends Vermont’s Goddard College through its off-campus program.)

As for the youngsters, both moms say the boys showed an artistic flair from an early age.

“I remember scribble marks on the page. Then those turned into circles, which turned into other things,” Jost says.

Would she have been disappointed if Nicholai showed no interest in art?

“Yeah. I think I would have been traumatized,” she says, laughing. “I remember thinking that there were just a couple things I wanted him to have, and I knew I wanted him to enjoy art. At least now he does. But if he ends up not continuing art, that’s fine, too.”

Jost, who holds an MFA from the University of Wisconsin and recently co-authored a book with Dave Loewenstein called “Kansas Murals: A Traveler’s Guide,” says most of her material in the exhibit is based on life with her family.

These include watching Nicholai and her husband tend to a burn pile, and witnessing her son experience his first Kansas snow. Then there was that time with the search helicopter, which inspired one particularly striking piece.

“Our family came home one night and noticed there was a search helicopter flying over our neighborhood. What was interesting about that was the political climate and this sense of oversurveillance, and that it means you might catch an innocent in the spotlight,” she says.

Jost also hopes that Nicholai isn’t an innocent caught in the spotlight in terms of people’s reactions to “Two Mothers, Two Sons.”

“People can over-interpret the art of children – and the art of adults, too, for that matter – in ways that are problematic,” she says.

The artist recalls her former first-grade teacher who became concerned that Jost was a troubled kid because she preferred to use the color black while drawing.

“I just thought the color black was a neat color, and I got to stand apart a bit from the other kids by choosing it as my favorite. Similarly, I think about a few of my son’s drawings and how violent they may look to someone who doesn’t know that the cannons in his pictures are actually shooting tomatoes,” Jost says.

Stalling adds that she hopes those attending the exhibit “can appreciate that the work of a young person is just as important as the work of an older person. We all have something to say.”