Lawmakers hear complaints about No Child Left Behind law 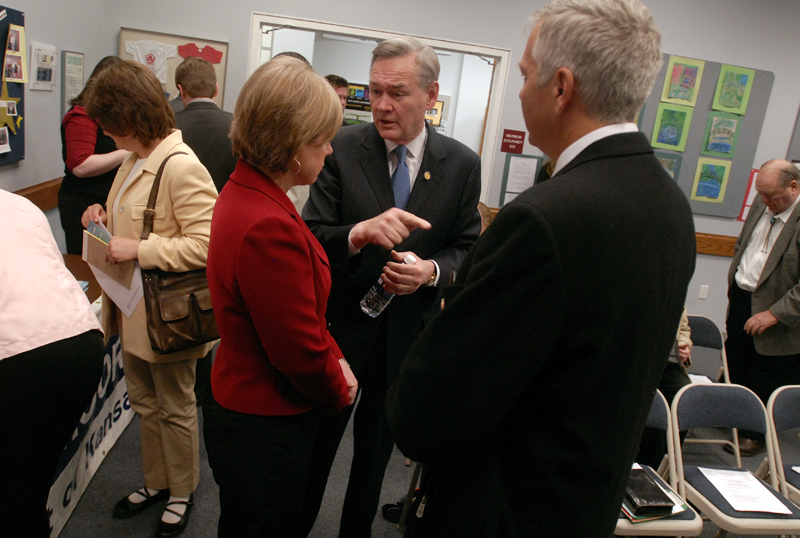 U.S. reps. Dennis Moore, D-Kansas, center, and Nancy Boyda, D-Kansas, talk with Blake West, president of the Kansas National Education Association before Thursday's community meeting to address problems and concerns with the No Child Left Behind law at the Lawrence public schools administrative office, 110 McDonald Drive. Local educators, administrators and parents attended the meeting to voice their ideas on education in Kansas. The event was part of Moore's districtwide No

Rebecca Moody, of Eudora, has a beef with the federal No Child Left Behind law.

“I think it needs to be rethought, re-evaluated and redone,” she said.

Earlier this year, her daughter, a fifth-grader at Eudora West School, lost interest in her favorite school subject – math – after her class had spent so much time preparing for a standardized test, Moody said.

The 2001 federal law created a national policy that every child will pass state standardized tests in English and math by 2014.

“We want to either make it better or try to do something because there’s a lot of problems with the current law,” said U.S. Rep. Dennis Moore, of Lenexa.

Moore said he and Boyda would relay comments from teachers, parents and school administrators to their colleagues in Congress.

Several panelists said they would favor reauthorization of the law with “dramatic changes,” such as using a growth model, which measures student achievement over time.

“We need to leave it up to individual states and school districts to determine qualifications of teachers, except when the federal government is paying salaries of teachers,” said Kansas Senate Vice President John Vratil, R-Leawood.

Many panelists and audience members blasted the law and blamed it for driving teachers out of the profession and discouraging development of gifted and other advanced students. Teachers and parents said the law also put too much pressure on teachers and students.

“We’re asking kids to put all of their eggs in one basket on a multiple-choice test that they take one time a year,” said Barb Thompson, a sixth-grade teacher at Quail Run School.

And she said the law forces teachers to “teach to the tests.”

Andy Tompkins, a former Kansas education commissioner, said the law meant schools and school districts had to deal with a new level of federalism.

“To say you are going to have everybody in the same place on the same day – guys, that ain’t going to happen,” said Tompkins, a Kansas University associate professor in education leadership and policy studies who will become education dean at Pittsburg State University.

Moore also has written a letter critical of the federal government for underfunding the law that was passed in 2002.

“In fact, since 2002, funding for NCLB has fallen nearly $55 billion short of the amount that the president and Congress originally agreed to provide,” Moore said in the letter he wrote with Rep. Jim Ramstad, R-Minn.

Moore predicted bipartisan work on making changes to the law, and Boyda said members of Congress will listen to educators and “get rid of parts (of the law) choking” the education system.

Rich Minder, a Lawrence school board member who was re-elected this week, suggested even the law’s name can create a negative effect.

“We need to know that as a partner in education, we are saying something positive about all children rather than something negative about our administrators or teachers,” Minder said.