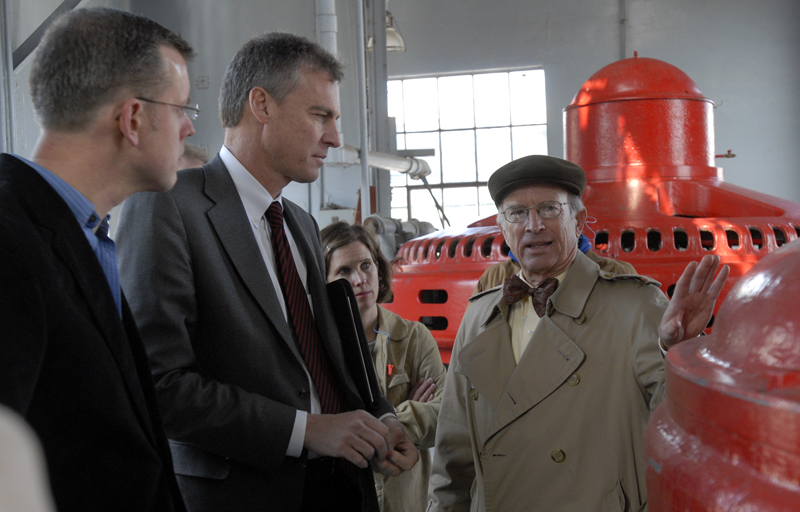 from left, state Rep. Paul Davis, D-Lawrence, and Lt. Gov. Mark Parkinson listen to Stephen Hill, president of Bowersock Mills and Power Co., at right, describe how the hydroelectric plant's generators produce electricity from the Kansas River. In the background is Sarah Hill-Nelson, Hill's daughter and Bowersock's secretary/treasurer. The company is examining the prospects for building a new power plant on the north side of the river.

More than a century after J.D. Bowersock rebuilt his hydroelectric power plant at the edge of downtown, Bowersock’s great-grandson is looking into building another one.

Stephen Hill, president of Bowersock Mills and Power Co., said his company was examining the feasibility of building a new generation plant along the north side of the river, alongside the Bowersock Dam just east of and below the Massachusetts Street bridge.

The project would be expected to cost $3 million to $4 million, Hill said, and take up to three years for planning, licensing, design and construction.

The potential payoff: The ability to double the company’s generation of renewable energy, taking advantage of water already flowing through a spillway on the other side of the river from Bowersock’s existing plant, which would remain in operation.

“There is a lot of water passing by today that we’re not using,” Hill said during a tour of the plant Thursday morning with Lt. Gov. Mark Parkinson and state Rep. Paul Davis, D-Lawrence. “If we had another plant on the north bank of the river, it would be operating full out and we’d be operating full out.”

Parkinson visited the Bowersock plant as part of his ongoing efforts to understand and promote production and use of alternative energy in the state, included in Gov. Kathleen Sebelius’ charge when she appointed Parkinson to serve as co-chairman of the Kansas Energy Council.

During the tour, Parkinson told Hill he would be willing to get representatives from all appropriate state regulatory agencies to sit “at the same table” to assist Bowersock Mills in its expansion efforts. Parkinson also offered to contact members of the state’s congressional delegation to see about assisting with federal regulatory agencies, such as the Federal Energy Regulatory Commission.

Parkinson concedes that hydroelectric power pales in comparison to existing and potential capacity for wind-generated energy in Kansas.

Not that the disparity should frustrate Hill, Parkinson said. Among the advantages of hydroelectric generation is that equipment and plants can last for “hundreds of years,” and, as with other forms of renewable energy, people increasingly are willing to pay a premium for so-called “green” power.

“It’s definitely a piece of the solution,” Parkinson said.

Hill and his daughter, Bowersock secretary/treasurer Sarah Hill-Nelson, took time Thursday morning to show off the plant’s seven turbines, the oldest of which dates to 1918. They noted with pride that a mechanical governor for one of the turbines had been rebuilt with assistance from the Kansas University School of Engineering, and that the plant’s control board – made by General Electric – remains in operation despite a rather sizable barrier when it comes to ordering replacement parts.

“It’s so old that they’ve lost all the records,” said Hill, who figures that much of the board dates back 40 to 50 years.

While the existing plant remains effective – its turbines are “as efficient as any that could be built today,” Hill said – the new plant would take advantage of advanced technology. The new plant likely would require only three turbines, each larger than those that already turn 109 times per minute so that they stay in sync with an electric grid fed by Westar’s Lawrence Energy Center and other plants.

During the tour, Hill talked as if pursuing construction of a second plant was a certainty. But afterward, he cautioned that while rising energy prices, favorable tax incentives and increasing consumer acceptance made this the first time that an expansion might work, he still has plenty of numbers to crunch.

“If we can’t do it right now, then maybe in two to three years it might work,” Hill said.