1942 classmates still hanging out together 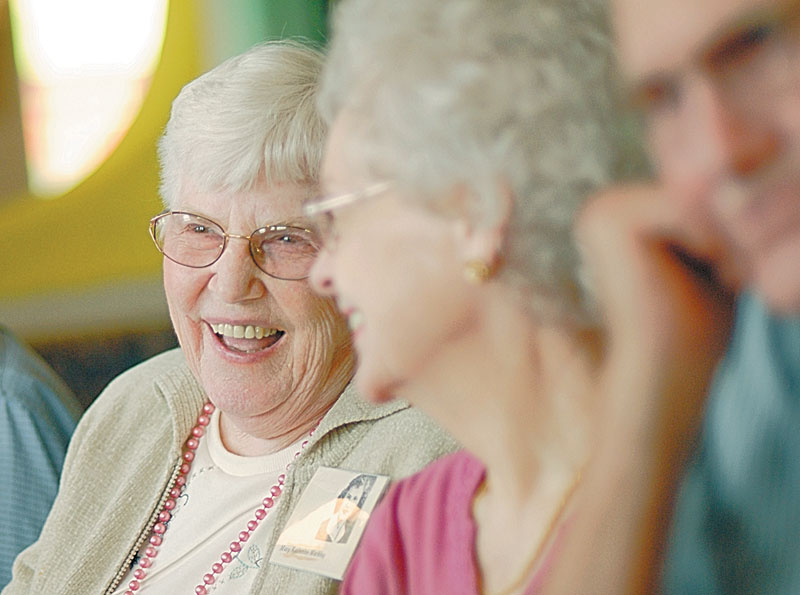 Liberty Memorial High School graduates from the class of 1942 Mary K. Markley Lynch, left, and Emma June Rhodes Eberhart, second from right, visit during a luncheon with other class members. The class of 1942 and their spouses meet about every three months to stay in touch. Those in attendance Friday met at Carlos O'Kelly's.

Restless during the winter months, Mary Kay Lynch decided to sort through her trunks and drawers. She discovered an old name tag with her 1942 Liberty Memorial High School senior picture on it.

“As per usual, I couldn’t throw it away,” she said.

The name tag came in handy recently when she wore it to an informal class reunion at Carlos O’Kelly’s in Lawrence.

Lynch and her husband, Howard, who were high school sweethearts, met 18 other childhood friends or fellow graduates nearly one month before the 65th anniversary of their class graduation.

This group of Lawrence-area residents began meeting every three months in 2006 after the class no longer had five-year reunions.

The class, which had 206 graduates, used to meet every five years for a two-day event at the Lawrence Holidome and the Union Pacific Depot.

Bill and Dorothy Stewart, Tonganoxie, began organizing the luncheons after Bill Underwood stepped down from planning the five-year reunions.

Underwood, who was a liquor dealer for 34 years, said he didn’t like arguing with the reunion committee.

“I like to make a decision and move on,” he said.

Dorothy Stewart said she decided to pitch in after hearing from a couple of classmates who missed having a reunion.

Now, class members meet more often and keep their reunions “simple.” They discuss what’s happening in Lawrence, discuss their lives and reminisce about the past.

Bill Conboy, a former Kansas University speech professor, said he remembered sitting in the auditorium of LMHS as a senior and listening to President Theodore Roosevelt announce the beginning of World War II.

“I remember being pretty much traumatized that everything had gotten so bad, but I think in one sense, I was looking forward to serving at a later time,” said Conboy, who served three years in the U.S. Marines. “It was a shock in a sense and a feeling of wanting to do the best we could to try to show that we were a great country.”

In 1954, the high school became Lawrence High School and was built at 19th and Louisiana streets. LMHS originally was housed in what is now Central Junior High School on 14th and Massachusetts streets.

Conboy said it was sad to see it “disappear.”

Dorothy Stewart, who graduated from Wyandotte High School, has attended all of her husband’s reunions, which began in 1962. They have been married for 61 years. The class feels like her own, she said.

“It also gives people a sense of belonging to something,” she said. “I think as people get older, they lose contact with friends.”

“I’m glad they’ve accepted me, even though we were archrivals,” she said.

Several others like Albert Pendleton didn’t actually graduate from LMHS. Pendleton went to kindergarten through middle school with the same people before going to military school and later serving in the Air Force. His parents were the owners of Pendleton Canning Factory and Albert later was a farmer. He said it’s fun to meet with everyone and reminisce.

Their next luncheon will be in June. Dorothy Stewart said she is hopeful three other LMHS classmates will join them from Texas, Colorado and Missouri.