Commuting affects many facets of life 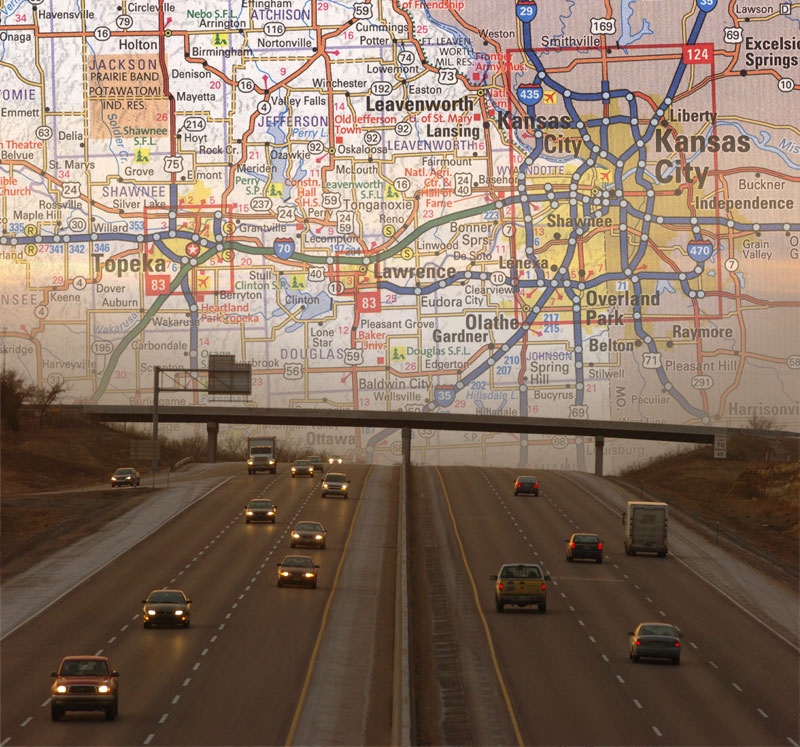 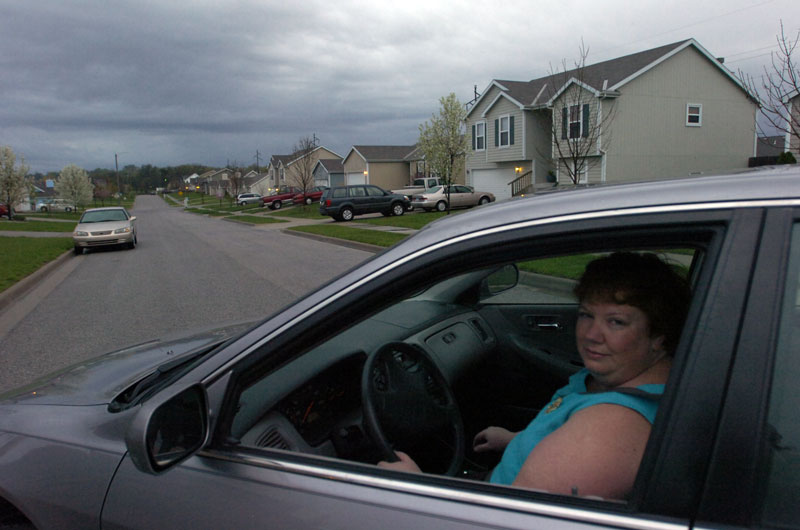 Mary Beth Hill, of Lawrence, drives every weekday to her job in Topeka via Interstate 70. Hill left at sunrise on Friday for the half-hour trek to the Frank Carlson Federal Building and U.S. Courthouse, where she works. The Census Bureau estimates that 25 percent to 30 percent of Douglas County workers commute.

Most days Mary Beth Hill pulls out of her driveway in northern Lawrence by 7:15 a.m.

It usually takes her 25 minutes – through speedy Kansas Turnpike traffic – to get to her office in Topeka, the Frank Carlson Federal Building and U.S. Courthouse where she’s a jury administrator.

The 43-year-old divorced mother of a teenage son moved to Lawrence in 1999 from Basehor. After three years of commuting from Basehor to Topeka, she wanted to be halfway between her job and her son.

“I’ve been doing it for so long. I just get in the car and go,” Hill said.

She is part of a significant portion of Lawrence and northeast Kansas residents who travel to work in a different county from where they live.

A 2005 survey by the U.S. Census Bureau estimated between 25 percent to 30 percent of Douglas County workers, or 16,000 people, travel for work, mostly to the Kansas City or Topeka areas. Conversely, about 7,000 workers are employed in Douglas County but do not live here.

Commuters have different reasons – such as their job type, schools, entertainment, family needs, the scenery – for living here or in other smaller communities and traveling more than 20 miles for work.

Whether they find carpool buddies or prefer solitude, their vehicles rack up miles.

They dread the potential for higher turnpike tolls, and detest road construction and sudden bad weather.

But they all have different reasons for keeping the lifestyle, and for most, they don’t have to endure the gut-wrenching, traffic-congested, snail’s pace of a commute as in many larger cities.

Having a significant commuter population also affects communities in various ways, whether it is fluctuating sales and property tax rates, home prices, wages, economic development opportunities or other factors.

Being between Topeka and Kansas City is both an advantage and disadvantage to Lawrence.

“What it ends up doing is attracting folks who work in communities but don’t necessarily want to live there,” said Bryan Dyer, a Lawrence resident and senior long-range planner for the city of Olathe.

At 7 a.m., Hill still had an hour before she had to be at work in Topeka. She had already packed her lunch, but she wanted to leave her house in the 600 block of Durham Court soon to beat most of the state-employee traffic that hits eastern Topeka from 7:30 a.m. to 8:30 a.m. weekdays.

“A lot of times I’m running around the house talking to myself so I don’t forget anything,” she said.

It was sunny outside, but she already knew that after her nightly ritual of checking the weather forecast before heading to bed.

She stuffed several food items and a can of Coke into a bag before letting out her dog, Millie.

Hill hit the lights and entered the garage where she settled into her familiar driver’s seat in her gold 2000 Honda Accord that has 166,000 miles on it.

Then she was off. It’s only a three-minute drive to the west Lawrence Turnpike entrance, where she breezed through the K-Tag lane along with dozens of other cars.

“There’s something to be said about not having to face the sun going to and from work,” Hill said.

Traffic was relatively light, and she switched her radio between classic rock and top 40 FM stations.

“It just kind of lets me get into work mode,” she said. “I can think about what I need to get done and then get there and get going.”

The commuter population of northeast Kansas factors into almost any transportation-planning conversation.

According to U.S. Census data, about 5,500 Douglas County residents commute to Johnson County; 3,000 work in Shawnee County; about 1,500 go to Jackson County, Mo.; nearly 800 travel to Wyandotte County; and lesser amounts are spread among other area places.

Kansas Department of Transportation planners are focusing on how to improve the four-lane Kansas Highway 10 east of Lawrence and into Johnson County, and possible tolls along that road have been floated as an idea.

“We know that something is going to have to happen – not only widening but other options,” said Dave Schwartz, KDOT’s statewide planning engineer.

Traffic volumes are mostly high on K-10’s eastern end in Johnson County during morning and afternoon rush hours, particularly when drivers are merging or changing roads. Topeka’s heaviest traffic tends to be all within one-half hour any time from 7:15 a.m. to 8:15 a.m. in the mornings and from 4:30 p.m. to 5:30 p.m. during evening instead of spread out over several hours like in major cities, Schwartz said.

“We do try to accommodate that major rush, but we also know that we can’t always build our way out of things,” he said.

Cliff Galante, Lawrence public transit administrator, said transportation planners have to take into account how residents in northeast Kansas frequently travel among the three major cities in the area for both work and shopping.

Oftentimes, the term “bedroom community” gets a negative connotation because it means workers leave during the day, putting less businesses at home to form a community’s tax base.

“I don’t know that we really see it as a negative. We recognize that that’s just part of our city and has been for a long time,” said Jeff Dingman, administrator for Baldwin City.

For smaller cities, it’s often a challenge to try to balance needs of commuters and those who live and work there, he said.

Kirk McClure, a KU associate professor in urban planning, says the census data from 1990 and 2000 shows that Lawrence has a level of commuters below the national average and that most workers are still employed within the city.

“Despite all of the complaints, we are actually in a fairly enviable position,” McClure said.

Being a home to several commuters can be a compliment to Lawrence if people want to keep jobs in larger cities but move to here for the school system or something else, McClure said. It also could mean that wages in Lawrence are generally too low, he said.

More than 250 Lawrence-area residents have accessed Rideshare, an Internet forum that connects people in need of carpooling partners. The Mid-America Regional Council in Kansas City, Mo., offers access to the service.

Nationally and in Douglas County, carpooling is not the norm. The city of Lawrence conducted an unscientific survey that found only 14 percent of respondents commuted in a carpool, although 60 percent of the people indicated they would be interested in either joining one or using intercity public transportation.

With many people commuting into Lawrence to work at Kansas University, Johnson County Transit this year started offering a K-10 Connector or bus service that links KU’s Edwards Campus and Johnson County Community College with the Lawrence campus.

For some, finding a good set of carpool buddies can be a blessing, especially when fuel prices head toward $3 per gallon.

“We have great conversations, and it helps save money on gas,” said Laura Harrington, 22, a Lawrence resident who works at the Kansas Health Institute in Topeka.

Laurie Putthoff, an Overland Park attorney who drives 37 miles to work from her Tonganoxie-area home, agreed that finding a decent carpool can create camaraderie within the group.

But a carpool makes it difficult to run errands during the day if she didn’t drive, and it can restrict her work schedule.

“I start feeling bad if I leave late,” Putthoff said.

Others feel like they need to have more control of their schedule, so they ride alone.

Harrington is a research assistant at the Kansas Health Institute in Topeka, where she studies child immunization. She grew up in Lawrence and moved back after college because she enjoys the artistic scene and downtown atmosphere, but she said she would not be able to find work studying the same topic in Lawrence.

“I’m at this job because I like what I do here, and it’s not at all because I want to work in Topeka,” Harrington said.

Dyer, the Olathe planner, drives his pickup truck every weekday east on K-10 from his south Lawrence home. He grew up in Lawrence and worked for the city of Lawrence before taking an opportunity three years ago to be an Olathe senior planner.

He makes the daily commute even though it cuts time out of his day because he wants to keep his daughter in school in Lawrence, and his wife still works here.

“I certainly have other things I could be doing other than driving,” he said.

Potentially, commuting time can take away people’s chances to contribute to their home communities, he said.

Barbara Carswell, a Capitol Federal Savings vice president in Topeka who commutes from Lawrence, says a good model for commuters to follow is balancing one’s career, family and community.

She advised getting involved in community organizations – although it might be easier for her because she worked in Lawrence for several years and her children are grown.

“I definitely feel a very strong part of Lawrence and Douglas County, and yet, two-thirds of my waking hours are not spent here,” Carswell said.

For some area commuters, their employers offer scheduling flexibility and the opportunity to occasionally work from home.

But it can be a lifestyle that requires tradeoffs – such as time in the car each day – for happiness.

“I like to come home to the open spaces,” said Putthoff, the Overland Park attorney who lives in rural Tonganoxie.

Hill, the jury administrator in Topeka, says commuting is an effort that can become smoothly implemented with the right steps and planning, such as finding information about traffic, weather and evening business hours for stores.

“If there was one central place we could go to find everything,” she said, “that would make things a lot easier.”