Kent Dobbins found the love of his life through his passionate hobby.

Dobbins – a 61-year-old optometrist who participates in four to six triathlons a year – met his wife at the Lawrence Memorial Triathlon in 1990. After seeing her at the next several competitions, he pursued her.

“The mover that I am, a year later I asked her out,” said Kent, who proposed to Liz at Lawrence Memorial in 1996.

“The only people that are impressed by age-group times are those in the higher age groups,” he said jokingly.

Growing up in Lawrence, Dobbins participated in baseball, basketball, football, gymnastics and track. At Lawrence High School, he competed in football, track and gymnastics before continuing the latter sport at Kansas University.

“That’s just been a part of my life,” he said. “I’ve always liked sports.” 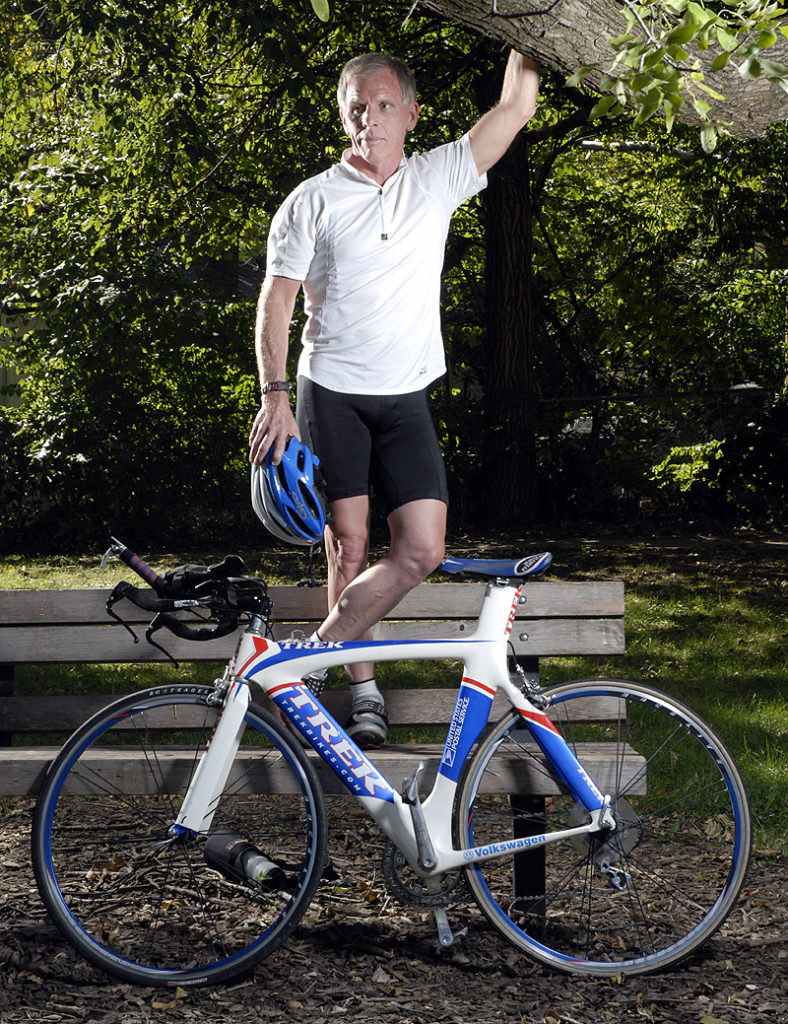 Fitness remained a part of his life. While jogging with friend Monty Nelson in the mid-1980s, Nelson asked if he wanted to do a triathlon. Dobbins did not know the term. Nelson explained the event consisted of biking, swimming and running.

Dobbins has not stopped, traveling to Sweden, Germany and Canada for such events. Before running a marathon with Liz in Tucson, Ariz., in December, Kent will enter his next triathlon – a half-Ironman competition – in Clearwater, Fla., in November.

He and Liz, 53, form a good pairing. They used to bike, run and swim together every day, but Liz has eschewed the biking as she prepares for the marathon.

Dobbins does not need extra motivation. Say the phrase “two-a-days,” and any former high school football player will shudder, but Dobbins dutifully performs his own version.

“It seems like every 12 hours we’re doing something,” he said.

He rises at 4:30 a.m. for a 5 a.m. run or swim. Then after working at his optometrist shop on 831 Vermont, he takes a 5:30 or 6 p.m. bike ride on his limited-edition Lance Armstrong bicycle given to him by professional triathlete Marcel Vifian. (Liz calls Vifian “our adopted son.”)

If the weather becomes unforgiving, he and his wife work out at the Lawrence Athletic Club or ride their indoor bikes at home.

“Lawrence has such a variety of terrain,” Liz said. “It bodes well to what we want to do.”

Their outdoor runs can lead to interesting adventures. A mountain lion stalked Liz as she jogged along the Kansas River levee in June.

She slowly retreated, and the animal eventually lost interest.

Liz, who taught physical education in Lawrence, De Soto and Topeka and coached gymnastics at LHS during the early 1990s, now leads a K-12 program that targets obesity and health issues by introducing multi-sports programs to Kansas schoolchildren.

“That’s been my passion,” she said.

Although Liz proudly boasts about her work, Kent reluctantly addresses his honors as a Marine.

After graduating from KU and before entering four years of optometry school in Memphis, Tenn., he went to Vietnam. During his 13-month campaign, he received a Silver Star. The military awarded the honor after he captured a Viet Cong captain who invaded his platoon’s camp. Shrapnel struck Dobbins’ ear and leg during the attack, earning him a Purple Heart.

Dobbins has neither haunting memories of the war nor does he relish talking about his heroics. He notes many soldiers did brave things but did not receive the same laurels. During the conflict his goal was to live another day.