You might think there’s a great divide between the careers of JoJo and Josh Longbottom.

JoJo, 24, is a well-known Lawrence rock musician, who played in the band Podstar and now is in Dead Girls Ruin Everything.

Josh, 28, is the new associate pastor at Plymouth Congregational Church.

But their father, Donald Longbottom, who until recently was a pastor in Omaha, Neb., doesn’t think there’s a divide in his sons’ careers.

“I don’t see the great juxtaposition, or the paradox between the two,” Donald says. “I grew up in the ’60s, and rock music, in my opinion – contrary to what they may think in Nebraska or Kansas – is about deep values of human tolerance, harmony and love – a great message.”

JoJo has lived in Lawrence since graduating from high school, and Josh moved here in August after he graduated from St. Louis’ Eden Theological Seminary and accepted the position with Plymouth.

JoJo says he’s not completely sold on the whole church thing but will attend Plymouth occasionally.

“I go on potluck days,” JoJo says. “I’m going to see his first sermon on October 1.”

The brothers – two of four children in the Longbottom family – were born in California and moved several times before ending up in Manhattan, where they graduated from high school.

JoJo’s former band, Podstar, signed a record deal when he was in high school, and the group decided to move to Lawrence when he graduated. He decided not to go to college. 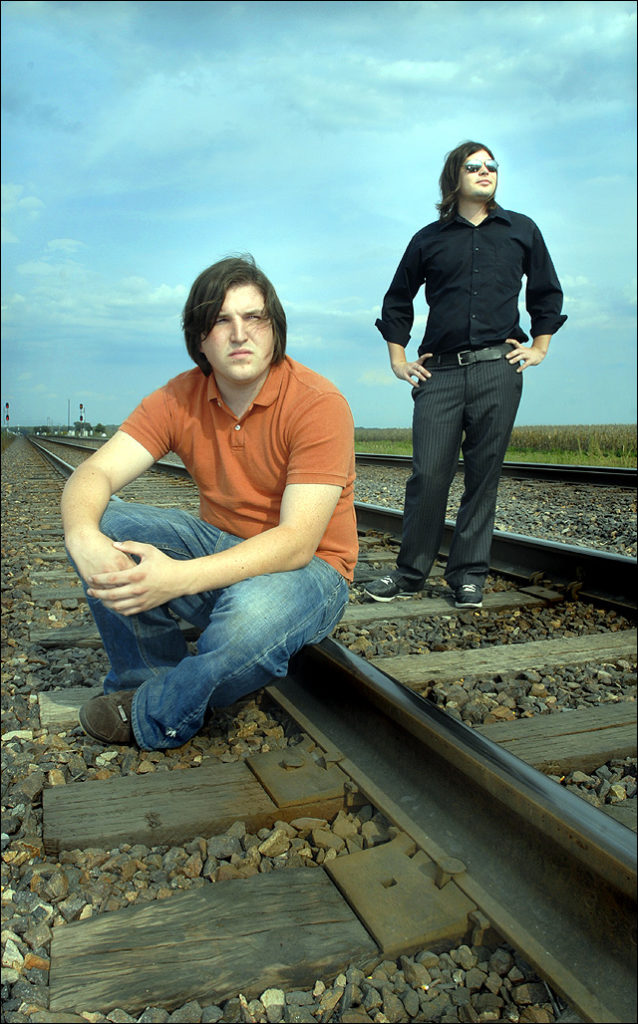 Lawrence brothers JoJo, left, and Josh Longbottom have chosen two varying paths in life. JoJo, 24, a local musician, performs with the band Dead Girls Ruin Everything. Josh, 28, is a soon-to-be ordained pastor with the United Church of Christ and is a current associate pastor at Plymouth Congregational Church, 925 Vt.

Before that, Josh chose to attend Kansas State University for a couple of years and was on the university’s nationally recognized debate team. But he eventually decided to drop out, not sure what his direction in life would be.

He had always been involved in social justice activism and even staged a walkout at Manhattan High School after a T-shirt he distributed that said “Fight Racism” was banned from the school.

When he left K-State, he started thinking more about a career path that would involve activism. To have time to figure that out, he started working as a carpenter.

“I had these debates in my head about the differences between meditation and prayer, and how to solve justice issues,” Josh says. “I realized that no single-issue movement was going to satisfy me.”

And that’s why he decided to become a pastor, first completing his bachelor’s degree in public speaking from the University of Nebraska-Omaha and later attending seminary.

JoJo recalls the moment he learned his brother would become a pastor.

“Complete disbelief,” JoJo says. “My jaw dropped. It made a lot more sense later. It’s been about five years, and for the first 4 1/2 I was in disbelief.”

Josh interjects: “What changed in the last half-year?”

JoJo: “I knew you’d be paying most of the rent.”

JoJo admits his family encouraged – maybe even pressured – him to get back in college. He’s now enrolled at Kansas University and has about two years left of a degree in creative writing, with a minor in French.

“I was the black sheep then, and just when I’m turning things around, he decided to follow his footsteps and be a preacher,” JoJo says with a grin.

Now, the brothers live together in a Lawrence apartment.

They both have long hair. They both love the guitar and rock music, especially ’70s acts such as Led Zeppelin, Thin Lizzy and Big Star.

Josh admits part of his attraction to the job at Plymouth was Lawrence’s music scene. But he’s given up late Saturday shows in order to be fresh for Sunday morning.

Peter Luckey, senior pastor at Plymouth, says Josh was a perfect fit for his congregation.

“We found in Josh a sparkling personality, a passion for justice, someone who cares deeply for the church and somebody who loves Lawrence,” Luckey says.

He notes that only 4 percent of churches affiliated with the United Church of Christ, which include Plymouth, have pastors under 35 years old.

That’s a statistic that Josh, too, knows by heart. He knows some members of his congregation – the bulk of which are at least middle-aged, like most mainline congregations – sometimes talk about his long hair.

“I’m sure it’s out there,” Josh says. “But this is an understanding congregation. I’ve had some comments about the long hair, but I think being young will be an asset.”

He especially wants to reach out to youths to be involved in the church. And maybe, he says, he can give the older members a fresh perspective on Christianity.

“I like church and the values of teaching people how to treat other people,” he says. “I do believe in something. But, honestly, I don’t think it matters, if we try to live harmoniously.”

Whether or not attending a church is part of his life, he knows music will be.

“I’ll be playing music for the rest of my life,” JoJo says. “I’ll be the old bastard in the corner of the coffee shop playing acoustic guitar.”

“What do you think propelled the Reformation?” Donald says. “Martin Luther’s ‘A Mighty Fortress is Our God’ is to the tune of a beer-drinking song of the day. You have to put ethics and religion in a vernacular people are comfortable.”

Donald, who is considering a new pastoral position or attending law school, says he loves rock music – especially U2 and Crosby Stills Nash & Young – but isn’t a huge fan of the indie-rock sound of JoJo’s current band, Dead Girls Ruin Everything.

JoJo says he doesn’t mind that Josh has chosen to follow in his father’s footsteps as a pastor. He just feels more comfortable on stage, not behind a pulpit.

“He’s building his resume for his job,” JoJo says, “I’m building mine for a wife.”