Since he arrived in Lawrence a week ago to collect signatures from people who would like to see President Bush impeached, Jim Goodnow has received a mostly positive or at least tolerant response.

“There have been 15 peace signs for every one-fingered salute,” Goodnow, 67, said Thursday as he sat at tables filled with petition lists in South Park.

Goodnow has been with his bus, which he calls the Yellow Rose, during most of his stay in Lawrence. The old bus has anti-war slogans and other signs painted on it, and Goodnow has been driving for most of the past year across the country as part of a grass-roots effort to gauge support for a Bush impeachment. In July, Goodnow, and others like him calling themselves the Committee to Impeach President Bush, started collecting petitions.

Goodnow did the same thing 33 years ago in an effort to get Congress to impeach President Nixon because of the Watergate scandal. Nixon ended up resigning instead of facing impeachment. 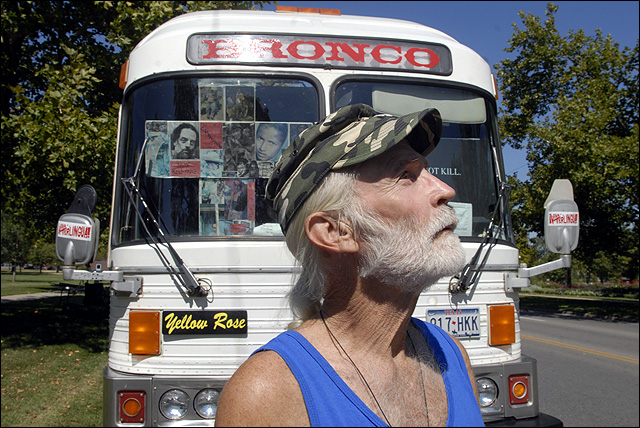 Bush should be impeached because of “lies and deceptions” in taking the United States to war in Iraq, Goodnow said. He also says that the Bush administration is breaking the law with its domestic surveillance activities.

Goodnow said he’s collected several thousand signatures during his travels the past few months and others like him have collected thousands more. Those petitions will eventually be collected and turned over to Congress, he said. It’s a way to make sure Congress knows how upset the country is, Goodnow said.

But some don’t particularly care for Goodnow’s cause.

About 9:30 p.m. Wednesday near Ninth and Vermont streets, a man in a late model car stopped and issued a threat, Goodnow said. The man called him a derogatory name and directed him to get out of town in 30 minutes or face “serious consequences.” The man was possibly in his 50s, dressed in a sports shirt and wore glasses, Goodnow said.

Goodnow called Lawrence Police. Although no details about the incident were available Thursday afternoon, a police spokeswoman did confirm that officers responded to a threat call in that area.

“At first I was scared; then when I was driving home I got mad,” Rowden said. “I don’t appreciate that someone was threatened.”