A plan for pensions: What’s next for the state’s public employee retirement system?

With test scores up and the school finance lawsuit recently settled, Kansas’ public school teachers have launched into a new and promising school year.

Most of those teachers, however, have no idea their careers are at the center of a gathering storm in the Statehouse.

That storm has nothing to do with whether to teach evolution or sex education – subjects that have commanded national attention on Kansas.

It has to do with retirement, pensions and fulfilling promises.

That need will require tough choices and heavy political lifting. And it will require today’s elected officials to show some will because the political payoff for them will be almost nil, and the effects of their decisions won’t be felt until most of them are long gone.

“It’s going to be one of the more important issues that we try to address during the next year,” said Senate President Stephen Morris, R-Hugoton.

KPERS is a quiet giant in state government that administers retirement plans for state and local public employees. 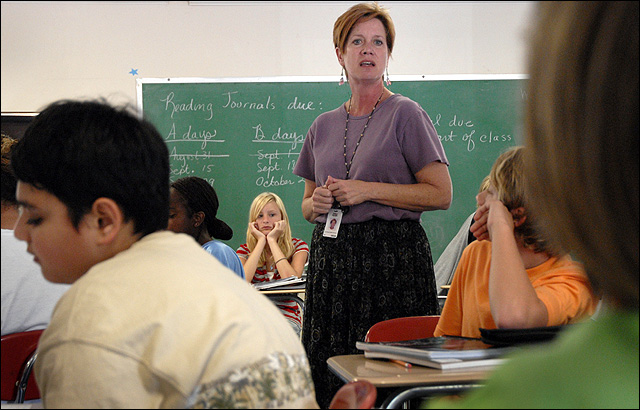 Deena Burnett, an English teacher at West Junior High School, instructs a class of eighth-graders on how to best write a memoir about something important in their life. The Kansas Public Employees Retirement System, which administers retirement plans for state and local public employees, is in need of additional funding. Currently there is a gap between the value of KPERS' assets and its future obligations to provide pensions to thousands of employees like Burnett.

It has assets of $12.2 billion, which it invests. That amount is more than state government’s annual spending budget. KPERS has 250,000 active, inactive and retired members, who represent nearly 1 in 10 Kansans.

As mammoth as KPERS is, there is a gap between the value of KPERS’ assets and its future obligations to provide pensions.

That gap is called the unfunded actuarial liability, and it is growing.

The major part of that unfunded liability – $3.5 billion – is associated with the school portion of the system.

“The school system came into KPERS with no assets,” said Glenn Deck, executive director of KPERS. “And the contributions have not been at the proper rate for a number of years.”

When the old public school retirement plan became part of KPERS in the 1970s, it was in poor financial shape.

Deck emphasized that there is no danger of the current system not paying pension benefits, but the unfunded liability does mean that increased state funding or changes in retirement plans for future employees must be considered.

Ironically, KPERS’ strong investment earnings in the 1990s masked some of the funding problems that must be dealt with now.

Compounding the problem of the unfunded liability is the always-present potential for volatile investment performance, which is exactly what happened during the recession after the Sept. 11, 2001, attacks.

Another recession would hit the pension fund hard, Morris said.

“With negative earnings in our stock market portfolio, then we could have problems. We are sort of living hand to mouth,” Morris said.

Also, because retirees are living much longer now, they receive more benefits. The average female born in 2000 can expect to live 84.2 years versus 78.5 years for a female born in 1950.

Currently, employees in the system can retire with full benefits at age 55 with 30 years of service. KPERS has proposed a plan that would increase the retirement age to 65. 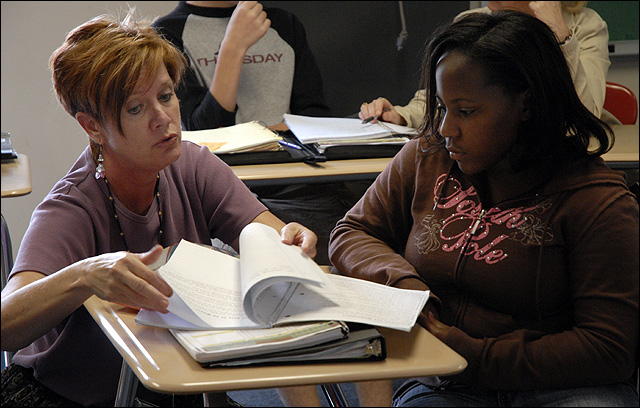 Deena Burnett, an English teacher at West Junior High School, works with eighth-grader Tiana Daniels on how to best write a memoir about something important in her life. Burnett and other teachers hope the Legislature does something to protect the Kansas Public Employees Retirement System, which administers retirement plans for state and local public employees. Currently, there is a gap between the value of KPERS' assets and its future obligations to provide pensions to employees.

Under Senate Bill 281, which was introduced last year but pulled back for further study, KPERS also would offer an optional defined contribution plan like a 401(k) where employees decide how much of their pay to save. Workers then don’t have to pay taxes on what they save until retirement, when they withdraw their money.

Teachers and public employee groups are closely monitoring the situation.

Mark Desetti, director of legislative advocacy for the Kansas-National Education Assn., doesn’t like the proposed solution, nor the implications.

“The argument shouldn’t be ‘Those teachers are going to drive us bankrupt.'” he said. “Instead it’s the failure of Legislature in the past to take care of the system appropriately.”

Desetti said it is a tough issue and many lawmakers now confronting it weren’t around when the problem started.

“What’s difficult is it is a huge amount of money, and we all know that,” he said. “Ultimately it will take more than talk, but you don’t solve the problem on the backs of the people who have held up their end of the bargain.”

“It would be one more strike against going into the field of education,” Burnett said. “The reality is that the Legislature hasn’t put enough money into the system. It’s worrisome. It’s a big question mark.”

Whatever the solution, Deck said, work needs to start now.

During the past few years, he said, officials have tried to attack the problem of inadequate contributions from the state by increasing the contributions and approving $500 million in pension obligation bonds. Still, he said, the moves aren’t enough to cover the gap.

He equated the KPERS system to steering an oil tanker past icebergs. Adjustments must be made well in advance to navigate safely.

“There is a huge cost over time to the state for delaying funding. It’s like not making your credit card or house payment,” he said.

What the candidates had to say

How important a problem is the unfunded liability in the Kansas Public Employees Retirement System, and what would you do to solve it? Would you support Senate Bill 281 or something similar to it?

“Problems with KPERS have been confronted and addressed constructively.

“We have taken two very important steps that, over time, should bring the KPERS system back into balance. We issued a $500 million pension obligation bond and agreed to an increase each year in the state employer contribution rate.”

Sebelius added that any changes in future retirement plans for state employees would have to be reviewed as they come to her desk.

“During the primary campaign, this was an issue that I would raise voluntarily because no one else would discuss it. It must be addressed.

“It all comes back to the need for Kansas to start living within its means so we can begin to cut taxes to grow the economy. The long-term answer to this is growing the Kansas economy, not raising taxes.”

Barnett said he would consider changes to the retirement age and a 401(k)-type benefit, but only for future employees.

KPERS is crafting a proposal, probably similar to Senate Bill 281, that would establish a new retirement plan for public employees hired in the future.

Senate Bill 281 was introduced in the last legislative session but pulled back for further study. It would have provided a basic, defined benefit plan and an optional contribution plan.

The work product of KPERS officials will be considered by the KPERS board Friday, and then by a House-Senate committee on pensions Sept. 26. The committee will decide whether to introduce a KPERS bill in preparation for the next legislative session, which starts in January.

Sure, advocates on all sides of those debates attract more than their fair share of ink, air and cyberspace.

But they also distract attention from the major issues that elected leaders will face during the next four years.

There won’t be many campaign ads talking about funding the public employee pension system, fixing crumbling buildings at universities or dealing with the outmigration of large areas of rural Kansas.

But these are the issues that will affect tax rates, personal income and the quality of life in Kansas for generations.

During the next six weeks, the Journal-World will present these issues to readers and call on the major party gubernatorial candidates – Gov. Kathleen Sebelius, a Democrat, and State Sen. Jim Barnett, a Republican – to address them.