Corn on the macabre 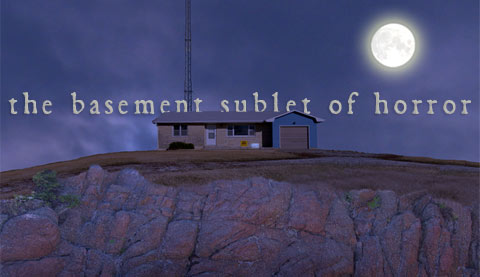 This lonely abode provides the faux setting for The 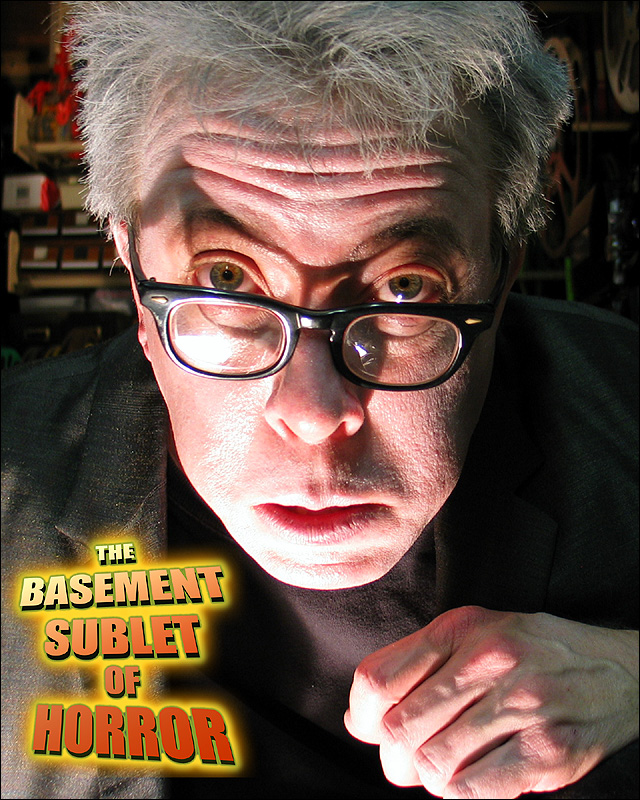 Perched upon a lonely cliff in Lawrence rests a ranch-style house under the shadow of a TV signal tower.

In its basement lurks Gunther Dedmund, a pasty, gray-haired, bloodshot-eyed scholar of horror cinema. Each week Dedmund unearths a “gem” from his collection – with titles such as “Atom Age Vampire” and “The Killer Shrews” – and presents it for the viewing pleasure and/or disdain of his cable audience.

You have entered “The Basement Sublet of Horror.”

At least that’s what Joel Sanderson would have you believe.

Sanderson is the alter ego of Dedmund. The Lawrence resident has almost single-handedly brought “The Basement Sublet of Horror” (“BSOH”) to the screen, where it airs at 11 p.m. every Friday night on Sunflower Broadband Channel 99.

“I definitely have real experience with bad basement apartments, which is something that students in Lawrence can relate to,” Sanderson says.

“My first apartment (in his hometown of Wichita) was a really horrifying basement where the shower was just a taped-off square in the corner. There were bugs and everything. It was a storage room where all the pipes and plumbing ran through the apartment, so I could hear the noise from all the apartments upstairs.”

The Basement Sublet of Horror

Sanderson used this familiarity as inspiration for an unlikely horror show, which veers from the more typical spooky locales like graveyards or morgues. “BSOH” is shot entirely in Sanderson’s own basement, with limited alterations.

“My basement is a ready-made movie-host set, anyway. It’s full of films and all types of media. What you see on the video is pretty much as is,” he says.

But the quirkiness of the setting also is matched by the quirkiness of the show. “BSOH,” which made its debut in June, isn’t just another Elvira-like program featuring a snarky host airing stinky movies. Sanderson dramatically alters these flicks by using a variety of cut-and-paste and found-art techniques. The end result is a clever and often hilarious spin on B-movie culture.

“With those types of films, it doesn’t hurt them at all if you trim them down a bit. This actually makes them more watchable,” he explains.

The process that Sanderson goes through to compile a show involves a lot of time and research.

His first step is condensing the featured movie down from a typical hour and a half to around 40 minutes.

“Then I watch that to make sure I have a little bit of continuity,” he says. “If I’ve lost the continuity, that’s another reason why I intercut clips: to distract people. Because if the film comes back in later and the entire cast has changed, people don’t notice as much.”

After that he chooses a theme from something that appears in the movie – hitchhiking, proms, a specific product – he starts scouring the Internet or his personal collection of movie reels to find elements to insert. He then secures releases for the material, the majority of which are in the public domain.

“It’s unique and there are no commercials, but I really enjoy the way he splices everything,” says Janelle Williams, a recent Kansas University graduate in art history who is a die-hard fan of “BSOH.”

“You can never tell if it was part of the movie or a different clip. It keeps you on your toes.”

In addition to the educational shorts, cooking shows, gladiator movies and occasional stag films (minus the nudity) that Sanderson implements, he has stumbled across a particularly obscure ingredient: soundies.

“Soundies are a lost treasure,” he says. “They were the original music videos. Soundies were basically a jukebox that played film clips. You would go into a bar and put your money in and it would play one of these short music films. They were shot on an incredibly low budget and usually only in one take.”

Sanderson was introduced to soundies after running across a man who did maintenance on those machines in the 1950s. He donated two reels that had been stored in his garage.

He says, “A lot of celebrities show up in them. I’ve got one with Liberace.”

Sanderson, 48, has been fascinated with bad cinema for decades.

He first dabbled with the idea of celluloid tampering while managing a drive-in theater in Emporia in the early 1980s. He experimented by turning the intermission reels into chaotic art pieces, much to the chagrin of flustered patrons.

From there he established “Escape’ Drive-in,” an outdoor gathering in Vinland that mixed bad movies with live music. The show moved to Lawrence in the early ’90s when Free State Brewery opened a beer garden that was supposed to be an extra theater for Liberty Hall. The M.T. Pockets Budget Film Festival lasted three years there before Sanderson brought his act to the Wichita Center for the Arts for a six-year run.

“This is the next step by taking it to a TV show,” says Sanderson, who earned a degree in sculpture from KU in 1992.

Although Sanderson spent the first few shows this season doing everything himself, including running the camera, he is expanding his work force as the series gains popularity.

“I’ve always watched it, but as it’s gone along my role has become more active,” says Lawrence musician and horror fan David Bagsby. “Now I’m actually in the show.”

Bagsby is tackling multiple roles in the Sept. 15 episode of “BSOH” (“Attack of the Monsters”).

“I play a really bad version of Dedmund after a weird cloning accident whose name is Renfield Chromosome,” Bagsby reveals. “Then I play his neighbor and a landlord.”

Bagsby cites the “Night of the Blood Beast” and “The Brain That Wouldn’t Die” as his favorite episodes. He is quite complimentary of Sanderson’s ability to doctor these B-movie rejects, and in the process create something entirely fresh.

“Things taken out of context, like cooking shows, work really well with horror. It makes it even more gruesome on some level,” Bagsby says.

“The Basement Sublet of Horror” will debut five new episodes in September before switching to repeats in October. (The series also is airing on public access Channel 7 in Wichita.)

It seems Gunther Dedmund will be cooped up for quite a while in his grungy basement domain.

Sanderson says, “I think people want something like this on TV: a strange thing late at night they can have fun with.”