Tragedy has a way of taking root so deeply in a memory that even the decades don’t erode the details. For many of those born at the end of the ’50s and beginning of the ’60s, that memory is of little John F. Kennedy Jr. saluting at his father’s funeral.

For Billy Mills, 68 and an Olympic gold medalist and former Kansas University distance runner, the memory involved a conversation he had with his father. Billy was 8 years old, and his mother had just died.

Mills, among the Kansas University track legends to be honored Nov. 1 at a benefit for the Bert Nash Center, shares the story at some of his motivational speaking stops.

“He told me I’ll have the wings of an eagle and then he drew a circle in the ground,” Mills related over the phone from his home in suburban Sacramento, Calif. “He told me: ‘Close your eyes. What do you feel?’ I can’t respond. Boom! He claps his hands. ‘I’ll tell you what you feel. You feel anger. You lost your mom. You feel hate.’ People had expressed hatred toward us. ‘You feel jealousy because you don’t have anything of material value. You feel self-pity. All those emotions will destroy you. Look deeper and find the dream. It’s the pursuit of the dream that heals you.’ My dream became the Olympics. I never really had that gut-level feeling of wanting the risk of trying for it until …”

“My dad died when I was 12 and when I was on that I chair I felt his energy throughout my whole body saying ‘Don’t. Don’t. Don’t.’ I didn’t hear a voice, but I felt his energy telling me not to jump,” Mills said. “I got down off that chair and for the first time ever, I wrote down on a piece of paper: ‘Gold medal. 10,000-meter run. Believe. Believe. Believe.” 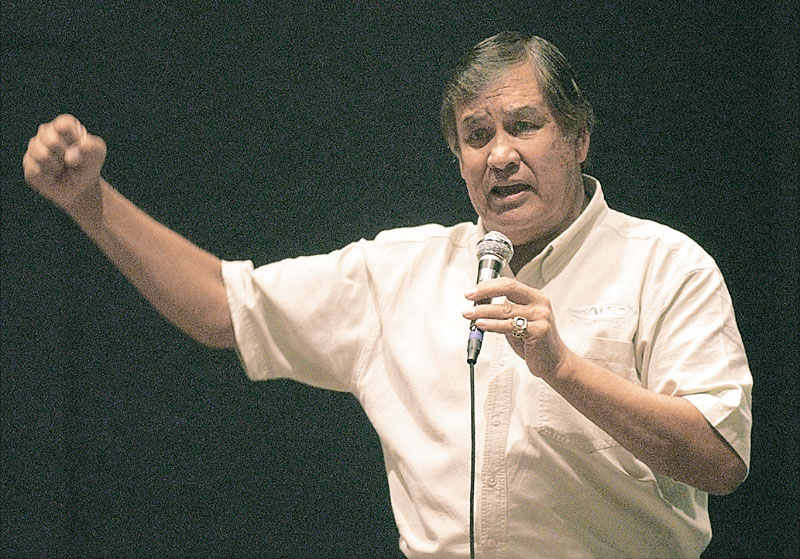 Billy Mills, who attended both Haskell and KANSAS UNIVERSITY before winning a gold medal at the 1964 Olympic Games in Tokyo, speaks at the Kansas Union. Mills will be among the KU track legends to be honored Nov. 1 during a benefit for the Bert Nash Center.

What drove Mills, a half-blooded Native American who had encountered prejudice, up onto that chair that nearly was his springboard to an early death?

“They took two All-American pictures,” he said. “One with me and one without me.”

When Mills achieved the goal he set that crossroads day in his life and won the gold medal in the 10,000 meters at the 1964 Olympic Games in Tokyo, he said his father and the eagle he drew flew back into the picture.

“I’m coming off the curb and I’m going low blood sugar, getting that clammy, sweaty skin I thought all distance runners got,” said Mills, who identified himself as hypoglycemic. “I’m pumping, driving, trying to get into second place. The German guy moved into the fifth lane when I’m lapping him and I’m in the fourth lane. I look at his jersey and at the center of his singlet I see an eagle. It was the most spiritual moment of my life. I see the eagle and I go back to my father. I feel the tape break across my chest. There was no eagle on the German guy’s jersey. I see him putting on his warmups after he’s done and there’s a big eagle on the back. I must have seen the eagle on his back when he was warming up. Subconsciously, I saw the eagle when I was passing him and it inspired me.”

The Olympic triumph changed Mills’ life. His tribe made him a warrior and with that came responsibilities.

“The No. 1 responsibility you assume is the power of giving,” Mills said. “It’s a great feeling to be able to take one moment in time and through that one moment be able to look back 40-some years later and see the effect on so many lives, all because of a running career that started in high school at Haskell in Lawrence, Kansas.” 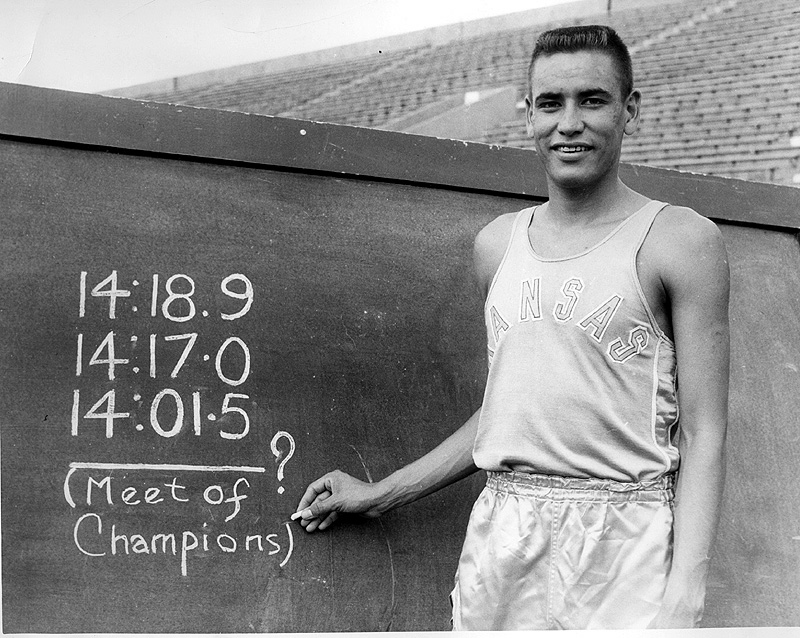 Billy Mills poses with a blackboard displaying his school-record times in the three-mile run during his career at Kansas University. Mills set his original mark as a sophomore, then lowered it in back-to-back weeks as an upperclassman before heading into the Meet of Champions in Houston.

Mills is the national spokesman for Running Strong for American Indian Youth, a Christian Relief Services charitable organization whose stated mission is “to help American Indian people meet their immediate survival needs food, water and shelter while implementing and supporting programs designed to create opportunities for self-sufficiency and self-esteem, particularly for tribal youth.”

He knows first-hand what it’s like to need help. He came to Haskell from the impoverished Pine Ridge Indian Reservation in South Dakota. Running Strong has raised more than $75 million in cash and in-kind donations over the past 20 years, Mills said.

Mills’ mission, when he speaks, centers not only in drumming up support for early Americans, but also in educating all Americans, some of whom might think Native Americans are looking for handouts in cases when they are merely asking for what they negotiated.

“Years back, when the tribes were being defeated by the U.S. government, one of the more powerful things the tribes did was to negotiate a conditional surrender,” Mills said. “One of the conditions was that no more land be taken and we can continue to self-govern. In lieu of vast domains of land and natural resources taken from us, you must forever supply health care, and a schoolhouse and a teacher for every 30 of our people who want to learn your way. We are the only group of people who paid for our education and health care and our children’s children’s children’s education and health care. I’m not talking about free education. We paid for it with the land taken from us. The Black Hills (of South Dakota) had $50 billion of gold that the federal government took from us.”

Orphans, Mills and his siblings were sent to the schools built as a condition of the treaties. Billy went off to Haskell to high school and this is the 50-year anniversary of his state high school cross country championship. From there, he went to KU, where his relationship with legendary track coach Bill Easton was a stormy one.

Mills related a story of how his best shot at winning a national championship in college died when he ran off the track over a dispute with his coach. 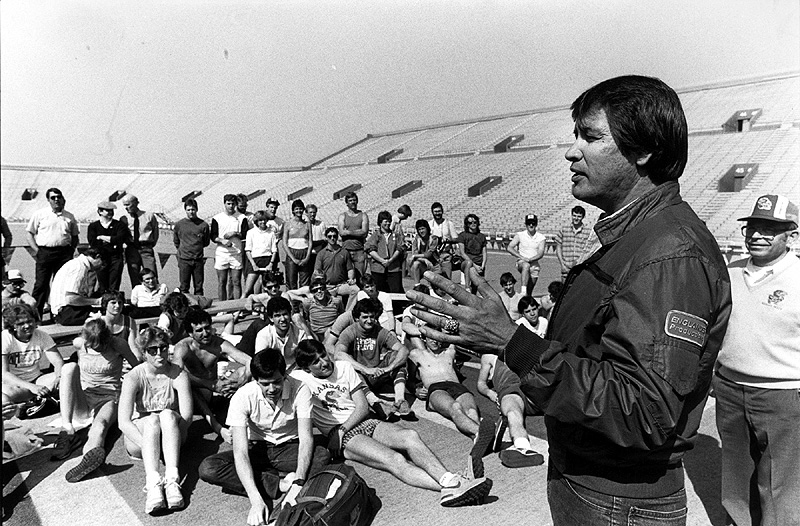 Mills shared with a fellow elite distance runner, Australian Pat Clohessy, competing for the University of Houston, that he had trouble sleeping the night before big races because of nerves. The runner suggested he skip the team breakfast, sleep in, have a light breakfast later in the morning and sleep some more.

“I told him the coach wouldn’t let me do that and he said, ‘Your coach won’t let you? You bloody bloke, you’re a senior. Prove you have leadership and do it your way.’ Coach called at 6, I decided to sleep in and I showed up at 9 without a tie on, but I had nice clothes on,” Mills remembered. “He told me I looked like a tramp. You tell somebody who comes from poverty, who’s orphaned … I flipped. I became angry and he said, ‘You’re kicked off the team.’ Right before the race the coach told me he felt sorry for me and he was going to let me run.”

Mills then visited with Clohessy and they went over their strategy again.

Mills said Clohessy asked him while they were running side by side, “How could you put up with that for four years?”

One more time, Mills said he heard, “Get up in front or get off the track.”

“I snapped,” Mills said. “I got off the track and the coach asked me why I quit. He told me I should have run my way instead of quitting.”

After leaving KU, Mills, already married to wife Pat, joined the Marine Corps and planned to get his masters degree and teach school.

“My wife would continue to put my shoes and workout gear out where I could see it,” Mills said. “She said I was too grouchy when I didn’t run.”

He resumed training and ultimately pulled off what was considered a major upset in earning the gold medal, and with it the platform to lobby for Native American causes.

Mills uses strong language in explaining what he believes to be a lack of representation for Native Americans.

“There is quasi-apartheid in this country that I love, this country I defended,” Mills said. “There needs to be three major forms of government represented. Federal, state and tribal. All 50 states have two U.S. senators and X number of Congressmen. Each represents his constituency with a vote. The tribal sovereignty is not represented with a vote. … There is a Senate Committee on Indian Affairs, made up of U.S. senators elected to represent state sovereignties, making decisions on tribal sovereignty, so therein lies the perpetual conflict. It would be like the two senators from California making decisions for the constituents of Kansas.”

Mills said he envisions a day when there will be 108 U.S. senators, including eight elected by Native American sovereignties.

Mills added he is encouraged by the states of Washington and New Mexico making Indian law part of the bar exam and expects it to be the case in all 50 states eventually.

When the conversation shifted back to running – on a track, not as in running for office – Mills was asked who would win a mile race among the three distance runners among those being honored at the Bert Nash benefit. Jim Ryun and Wes Santee also will be honored.

“Probably Jim,” Mills said. “I think he had the faster leg speed. I know Wes had acceleration. He was quick. But I think Jim had more leg speed. Out of the three of us, I would get the bronze. But before I would race them in the mile, I’d get them to guarantee to race me in the 10,000. That’s called the power of negotiation.”